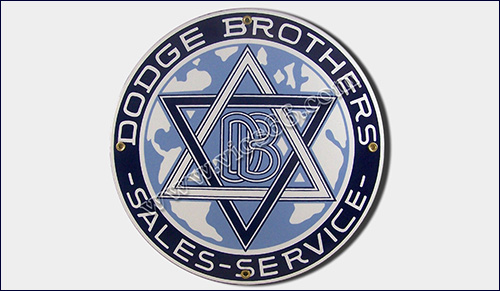 DidJew know a Jew invented those soy sauce take out packets we all know and love? Who nu? 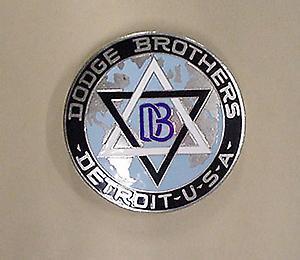 I may be the last to notice, but if you’re like me and shluff through commercials (or eat) I’ll share. A few weeks ago, during a Dodge automobile commercial, I thought I saw a flash cut of The Star of David. Pastrami dripped from me. I mentioned it to a few people who thought I went more meshugge. Until I saw it again. And again. As a “mature” Jew, I immediately thought this was the company’s way of hooking the Jewish driver, and maybe delivering a pfffft to the notorious anti-Semite, Henry Ford. So I researched. The original Dodge emblem was a circle with the familiar interlocking triangles with the DB (Dodge Brothers) also part of the outer design. The answer is, we don’t know for sure, but the most likely explanation is the Dodge boys (who weren’t Jewish) used the two Greek letter Deltas, and yes, back in the day, it is possible, they were giving their rival Ford a zetz. However, in 1938, when the company exported models, the logo was chopped by a triangle, probably not to give Hitler a heart attack. (Pity!)

It took 500 years, but recently, the Portuguese Cabinet approved offering dual citizenship to the descendants of Sephardic Jews whose ancestors were tortured, murdered or forced to convert (many becoming Conversos, practicing Judaism in secret) during and prior to the official Portuguese Inquisition in 1536. This follows on the heels of a similar law proposed in Spain. "There is no possibility to amend what was done," Portuguese Justice Minister Paula Teixeira da Cruz said. "I would say it is the attribution of right." Today a monument stands in an area of Lisbon that was once the site of a pogrom and reads: "In memory of the thousands of Jewish victims of the intolerance and religious fanaticism murdered in a massacre that began in this place on April 19, 1506.” As Portugal is a member of the 28 nation European Union, citizenship offers perks which include entry into a huge market. Jews everywhere who can prove ancestry may apply. It’s been a long time in coming, and while the stain can never be removed, modern Portugal is at least attempting to reconcile the brutal injustices of the past.

Who hasn’t heard this classic? Well, once again our belief in Jewish penicillin was affirmed, when on a February 12 segment of “The Doctors” TV talk show featuring the flu, they made a megillah out of mama’s mucous-fighting elixir. Of course some got dithered about the psychological vs. the physical, yet they acknowledged the soupy flu fighters power which including steam, protein and amino acids, along with vitamins and minerals helps. Plus mama doesn’t charge – usually.

"DON'T CRY FOR ME ARGENTINA ….IT WON'T BE EASY, YOU'LL THINK IT STRANGE”

To many Jews, Argentina is a strange place with odd leaders who become musicals … and of course, as a “friendly” country to Nazi criminals (and Iranians). Certainly current Argentinian President Cristina Fernandez de Kirchner is embroiled in strange and perhaps nefarious doings that make Eva Peron seem like Imelda Marcos.

First up … there was the story that ran through a legion of media sources that she “adopted” a Jewish child to stop him from turning into a werewolf. Their fact-checkers must’ve been on Manischewitz overload. Not entirely true, friends. Reports were rampant that the Prez was acting on the Latin American tradition that the seventh babe born to an Argentine family can become a godson to avoid his transformation to Remus Lupin. According to the “The Guardian,” while she did “adopt” 21-year-old Iair Tawil last Hanukkah, making the strapping son of a rabbi a first Presidential Jewish godson, nevertheless, the general press was guilty of mixed legends.

Argentine historian Daniel Balmaceda stated there is no link with the werewolf tradition and the seventh child becoming a presidential godchild. The whole meshuggas started in 1907, when an Eastern European couple asked the then-president José Figueroa Alcorta to become godfather to their seventh son, carrying on a custom from Czarist Russia. Yada yada, this soon became an Argentine tradition and law (1974). The werewolf craziness started with Argentina’s “gauchos” or cowboys, adapted by old European legends. In the Argentinian version, the lobizón morphs into part pig and dog Tuesdays and Fridays. For We Jews, the Shabbos event may usher in a whole new group of curious congregants, but the pig part? Nah.

On a far more serious and tragically ironic turn of events, the world is still investigating the horrific and mysterious death of Jewish prosecutor Alberto Nisman four days after releasing the results of his findings, implicating President Cristina Fernandez de Kirchner and other government officials of secretly conspiring with Iran to cover up information into the 1994 bombing of a Buenos Aires Jewish community center, killing 85 people. I’ve no doubt that her “godson” along with millions of Jews, are repeating these lyrics with a bitter twist. “Cry for me, Argentina” … and let justice prevail.

WHO NU? THE SOY SAUCE PACKET & THE JEW

The connection between Jews and Chinese food is real, and it’s deep. The connection between baggies of soy sauce packets in Jewish homes is also deep, if sometimes deeply messy. While the packet’s origin is an unsolved mystery, the story of how it became popular is known – and Jewish. That’s the story of Howard Epstein, who, as the founder of the major soy-sauce brand Kari-Out, is seen as the macher of packaged American soy sauce. Packaging is in his DNA. His father manufactured those long plastic tubey things for freezer pops. Howard, now 81, made his first foray into the biz with packaging popcorn over a half century ago. The popcorn pooped. One of his dad’s tea bag salesmen suggested he put his gelt into soy packaging which he did in 1964. While it was difficult to break into the Asian market, Epstein entered at just the right time when people were eating at home and looking for carry-out condiments, along with taking flights where food was served. Today, Kari-Out has a 50 percent market share and can even be found in Iceland. So, the next time you get a hankering for ordering in Kosher Chinese, throw a thanks to the Jew who founded your secret soy sauce stash.

The Gentle Art of Condolences

Judd Apatow: Knocking It Out of the Park