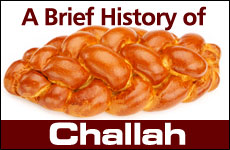 On my favorite cooking show “Chopped,” I was horrified to see them repurposing our precious Shabbat delicacy – challah.

Okay, I confess. I’m a “reality TV” junkie, but hooked on those shows that actually require skill. Which is why I’m addicted to the food channel.

You see, I can’t cook. Whenever I tried making matzah balls, I had emergency services on speed dial. “I’m experimenting!” would send my family careening through the screen door like the Roadrunner. When our son was young, I baked one big cookie with his name on top. Did I know it would run together during the baking and emerge looking like a miniature European dictator?

My favorite show is “Chopped” where four “common” geniuses vie in three rounds (apps, main, and dessert), from mystery baskets that contain weird stuff I mostly never heard of (buffalo ears, Poussin, watermelon radish, earthy sunchokes – and bubble gum) in less time than it takes me to floss my teeth. More, they must mix, “transform” and “repurpose” this panoply of impossibles.

What could they do to transform challah?! And why would they?

However, a few weeks ago, one of the “secret” ingredients in the basket to be “re-purposed” was challah.

What could they do to “transform” challah?! And more, why would they?

I immediately summoned 3,500 years of Jewish history and I was determined to be defensive.

Our challah is not to be fooled with. We Jews are masters at imbuing ordinary acts with symbolism. For thousands of years challah has been our Shabbat and holiday bread, and as for meanings, challah alone needs a thesaurus.

The first appearance of the word “challah” appears in the Bible (Numbers 15:18-21) as follows:

The word “cake” is a translation of the Hebrew word “challah.” The offering or portion of challah that was given to the priests (kohanim) was called the mitzvah of “hafrashat challah” – separating the challah.

(In the days of the Temple in Jerusalem, Jews were told to separate 1/24th of the doughs and give it to the kohanim every Shabbat. I’m the daughter of kohanim, but I’ve yet to receive a morsel.)

On Shabbat, the two challahs placed on our festive tables represent the double-portion of manna that fell on Friday, the heavenly bread that fed Jewish people during their 40 years in the desert.

Twelve humps recall the miracle of the 12 loaves for the 12 tribes of Israel.

On Shavuot, two oblongs side by side resemble the Tablets of the Law.

Next to matzah (and chicken), challah is what makes our world go round.

The word challah (ḥallah plural: challot/ḥalloth/khallos) (Hebrew: חלה) is also called khale (eastern Yiddish, German and western Yiddish), berches (Swabian), barkis (Gothenburg), bergis (Stockholm), birkata in Judeo-Amharic, chałka (Polish), colaci (Romanian),and kitke (South Africa). Yet the origin Etymology of the word “challah” is as mysterious to me as me trying to bake one – from scratch.

Challah may come from “Gal” referring to a circle in Hebrew.

Others suggest “challah” may be derived from the amalgamation of: Hilu or hala, the Arabic root for “sweet.” Nah.

The name “challah” was given applied to the bread in South Germany in the Middle Ages when it was adopted by Jews for Shabbat and holidays. John Cooper (Eat and Be Satisfied) notes that the first mention was in the 15th century. The term was coined in Austria. Before, the bread was called “berches,” a name still used by Jews in some places today.

Every Friday evening, it's challah that heralds the Sabbath. Likewise on Jewish holidays.

The prayers and customs that accompany the mitzvah of making challah for the Sabbath are the same the world over, linking the present to the Book of Leviticus, when God instructed Moses to place two rows of six challot. For more than 4,000 years since, Jews have been delighting in challah for Shabbat.

On Friday night and holidays, this special, oh so delicious bread is also a reminder of the purity of the day of rest, as well as a remembrance of the deprivation of Eastern European Jews who lived on black bread during the week.

Tearing vs. Slicing: On “Chopped” I saw them slicing the challah instead of tearing! (I ran for the Slivovitz.) Oy vey. Abraham is rolling.

Schlissel challah: Whether a key of dough is baked inside or adorns the top, some still engage in this controversial practice. The key is a form of prayer to open up the gates of livelihood. Other interpretations see the key as understanding the basic necessities in life as stored for us in shamayim (heaven) behind locked gates. All we have to do is ask God to unlock the gates and fill our homes with blessings. Just as He unlocked the gates of sustenance to provide for us in those days in Israel, may He provide us with our needs now.

Salvation: A recent custom, 40 women devote their prayers while separating challah to those in need of salvation (illness, a worthy mate, the birth of a child). Separating challah is a segulah (good omen) for an easy, safe birth and some separate challah at least once in the ninth month of pregnancy.

So, with this history in mind I watched what they did to OUR challah on “Chopped.” Oy, what they made! I don’t want to see (or understand) challah béchameled, cassoletted, chiffonaded, moled, rouladed, confited, aiolied, rouxed, coulisdied, ceviched, sabayoned into a pate, or encrouted in something. I don’t want to see white chocolate (which should be an extra Jewish sin) using our challah! (Never mind the recipes for Challah and Apple Stuffed Pork Loin? Mit bacon or ham? QUICK! THE SLIVOVITZ!)

While “transforming” may be a sign of genius in today’s world, let them play with goat’s feet, dragonfruit, and yes, even Halvah with fried pickles. But there are just some things you don’t futz with.

No ratings, and yes, even “geniuses” should be required to “repurpose” that which has had a purpose to We Jews for millennia.

Just as we don’t need to “transform” Judaism, even for ratings, our challah stands alone (except for maybe some raisins, and French toast) – and like Judaism, should be dosed straight, with love, and respect for this ever-lasting mitzvah!

Stand Up and Sit Down

Dreams of My Grandfathers
What Happened to the Truth?
The Japanese Everything Bagel Spice Recipe
How To Stock A Jewish Pantry Wherever You Live
Comments
MOST POPULAR IN Jewlarious
Our privacy policy