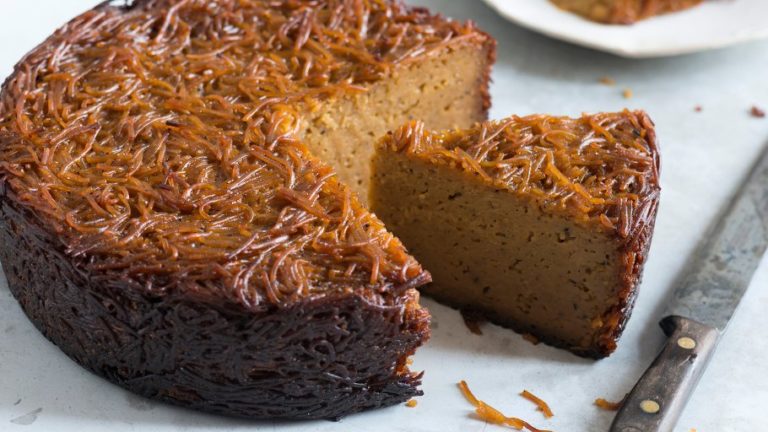 When it comes to food, few things sound more Jewish than kugel.

When it comes to food, few things sound more Jewish than kugel. It is a side-dish staple of Jewish cuisine and a seudah stalwart but it surprisingly receives little fanfare and often is taken for granted. For many shoppers and meal-makers, kugel is an after-thought, a last-minute supplement just in case the brisket is a catastrophe, the schnitzel is a calamity and the tzimmes is a tragedy. In many ways, kugel is sort of like the friend you invite for a Shabbos meal at the last second but who winds up being the life of the party and stealing the show. In this regard, kugel might be the most underrated and underappreciated aspect of Jewish cuisine.

Kugel is like the friend you invite for a Shabbos meal at the last second.

Many scholars agree that the term “kugel” is a Yiddish term deriving from the German word for ball or globe. Apparently, the German version of kugel was spherical in shape but the kugel moniker stuck despite the fact that nowadays most kugels are square or rectangular. By the way, you will not find triangular kugels because that shape is reserved for hamantaschen. You also will not find parallelogram-shaped kugels because you will not find parallelogram-shaped tins.

According to some scholars, the kugel of today can be traced back to a dish eaten during Talmudic times known as pashtida, which featured two layers (top and bottom) of dough with a filling. Some argue that the pashtida, which is mentioned in the Shulchan Aruch (168:17), represented the manna and dew that fell from the sky during the Jews’ forty years in the desert. One could argue that the pashtida sounds more like a knish but most folks will not talk about the knish in this regard because, as they say, you really shouldn't knish and tell.

Kugel, a/k/a/ the kosher casserole, comes in many varieties, the most popular being potato, noodle, broccoli and spinach. Within these broad categories are more exotic versions like sweet potato kugel and salt & pepper kugel. Technically, there are no limits to creating different flavors of kugel but at your local supermarket you are unlikely to find kale kugel, kumquat kugel or curry kugel.

Within the noodle category are several types including lokshen and Yerushalmi. The word “lokshen” actually is Yiddish for noodle and lokshen kugel typically is associated with a sweet noodle kugel featuring raisins, nuts and cinnamon. As many rabbis will tell you, if you gossip pejoratively about someone else’s noodle kugel, you may be guilty of speaking lokshen hara.

Yerushalmi kugel, a mash-up of sweet noodle and salt & pepper kugel, has a story behind it. In the 18th century disciples of the Vilna Gaon flocked to Israel and brought with them their own distinctive Eastern European culture including cuisine. Along the way, they concocted a special version of noodle kugel with caramelized sugar that eventually became known as Kugel Yerushalmi or Yerushalmi Kugel. Yes, had these Chasidim wound up in Tel Aviv, the dish probably would have been called Tel Avivi Kugel, which reminds me of a really bad joke: How much did they Tel Aviv? Eilat.

Beyond the broad kugel categories mentioned above, you will find some outliers including challah kugel which, as the name suggests, is made using an actual challah. Such a hybrid sounds decent and certainly less alarming that other possible culinary combos like chopped liver soufflé or gefilte fish cake.

It is interesting that while salt & pepper noodle kugel remains relatively popular, other combo flavoring is not. For instance, good luck finding lemon & lime kugel, ketchup & mustard kugel or peanut butter & jelly kugel. You also will not find Sephardi & Ashkenazi kugel, but mostly because the two cannot agree on whether the kugel should be served standing upright (Sephardic) or lying down on its back (Ashkenazic).

For the record, not all Jews refer to kugel as kugel. Some Jews, particularly those from Poland and the Ukraine, refer to it as “kigel.” That can be sort of confusing when placing an order at the deli counter:


Final thought: Some people contend that kugel is like pizza, bread and the Earth’s top layer because each is only as good . . . as its crust.

Did You Know They’re Jewish?
Blocked Goals and Anger
Why the Mezuzah is Placed on a Slant
Faith: the Axis Upon Which the Wheel of Science Turns
Comments
MOST POPULAR IN Jewlarious
Our privacy policy