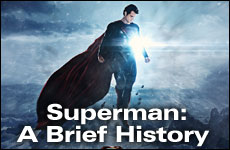 Meet the Mensch of Steel.

Jerry Siegel and Joe Shuster, the two ordinary young men who created an extraordinary hero, lived twelve blocks apart from each other in Cleveland. The pair collaborated on stories for their high school newspaper and shared a passion for science fiction and pulp comics. It was the 1930s, and comic book publishing was in its infancy. Like many young Jews with artistic aspirations, Siegel and Shuster yearned to break into this fledgling industry. Comic book publishers actively hired Jews, who were largely excluded from more "legitimate" illustration work.

The 1930s were also, arguably, the most anti-Semitic period in American history. Nazi sympathizer Fritz Kuhn of the German-American Bund led legions of rabid followers on marches through many cities, including Siegel and Shuster's hometown. Radio superstar Father Charles E. Coughlin of the pro-fascist Christian Front was one of the nation's most powerful men. And Ivy League colleges kept the number of Jewish students to a minimum, while country clubs and even entire neighborhoods barred Jews altogether.

So Siegel and Shuster began submitting treatments under the pseudonym Bernard J. Kenton, just to be on the safe side. Throughout the Great Depression, the two boys scraped together every penny they could just to cover postage. Shuster sketched on cheap brown wrapping paper.

From these humble beginnings, Siegel and Shuster carved out a character that embodied their adolescent frustrations, served as a mouthpiece of the oppressed, and became an American icon. Many years later, Jerry Siegel recalled the birth of Superman:

"The story would begin with you as a child on far-off planet Krypton. Like the others of that world, you had super-powers. The child's scientist-father was mocked and denounced by the Science Council. They did not believe his claim that Krypton would soon explode from internal stresses. Convinced that his prediction was valid, the boy's father had been constructing a model rocket ship. As the planet began to perish, the baby's parents knew its end was close. There was not space enough for three people in the small model craft. They put the baby into it."

The idea of for this new superhero came to them in 1934. It would take another four years before Superman would be transformed from a feverish dream to a full-fledged hero. In 1938, Detective Comics, Inc., was looking for a character to launch its new magazine, Action Comics. They paid young Siegel and Shuster $130 for the first thirteen pages of Superman. Action Comics #1 came out in June of that year.

Superman's original name on Krypton also reveals Biblical underpinnings. Superman is named Kal-El and his father Jor-El. The suffix "El" is one of the ancient names for God, used throughout the Bible. It is also found in the names of great prophets like Samuel and and Daniel and angels such as Michael and Gavriel. We may never know whether Siegel and Shuster were aware of these precise Hebrew translations; nevertheless, the name could not be more apt.

Like the biblical Moses, Superman is discovered and raised in a foreign culture. Baby Moses is found by Batya, the daughter of Pharaoh, and raised in the royal palace. Superman is found by Jonathan and Martha Kent in a Midwestern cornfield and given the name Clark. From the onset, both Batya and the Kent’s realize that these foundling boys are extraordinary. Superman leads a double life as the stuttering, spectacle-wearing reporter whose true identity no one suspects. In the same way, for his own safety, Moses kept his Israelite roots hidden for a time.

While the invincible Superman may have stood the test of time, the lives of his creators were not as triumphant. From the beginning, Siegel and Shuster were so busy they had to hire assistants, but while DC Comics was making millions, Superman's creators weren't sharing the wealth. The two men were paid a salary, but their initial payment back in 1938 had included all rights. They had sold their percentage of a goldmine for $130 and were eventually fired from their own creation.

Lawsuits followed. None were successful. Siegel and Shuster tried and failed to create new characters. Their names were familiar only to comic book aficionados. Then, rumors began to circulate in the early 1970s that a big budget Superman movie was in the works. DC Comics received $3 million for the rights to film Superman. Once again, Siegel and Shuster were left out of the equation.

Siegel and Shuster were now penniless and forgotten.

This time, the two men tried a new approach. They bypassed their lawyers and went straight to the media. Newspapers across the world picked up the story of Siegel and Shuster, the poor boys who'd created an American icon, made DC Comics rich – and were now penniless and forgotten. That Shuster was now going blind added to the story's poignancy.

Legally, DC Comics owed Siegel and Shuster nothing, but bad publicity was costing the company dearly. A financial settlement was reached, and the names "Siegel and Shuster" appeared in Superman comics once more.

My 2006 best-selling book, Up, Up, and Oy Vey chronicled how Jewish history, culture, & values helped shape the early years of the comic book industry. Like Siegel and Shuster, the early comic book creators were almost all Jewish, and as children of immigrants, they spent their lives trying to escape the second-class mentality which was forced on them by the outside world. Their fight for truth, justice, and the American Way is portrayed by the superheroes they created. The dual identity given to their creations mirrors their own desire to live two lives privately as a Jew, and publicly as an American.

In 2013, "Siegel and Shuster’s" creation returns to save the world again. In today's again of uncertainty and turmoil, the world needs the Jewish values that underpin the Mensch of Steel more than ever.

Monty Python and the Jews
The Promise Of The Land
Which Chat Are You On?: Parshas Behar/Lag Ba’Omer
Do You Like Slow-Cooked Food? Thank the Jews
Comments
MOST POPULAR IN Art Smarts
Our privacy policy