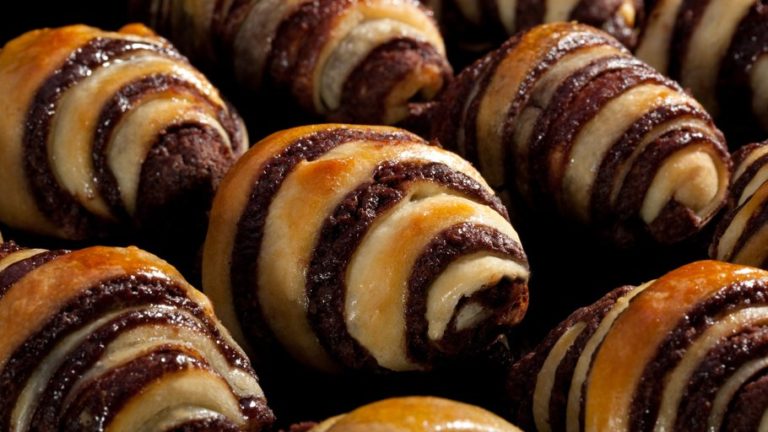 “Rugelach” is a Yiddish word that literally means “little twists.”

Many Italians enjoy rigatoni, ravioli, ricotta and risotto while many French enjoy ratatouille, many Japanese enjoy ramen and many Scandinavians enjoy rhubarb. Jews also enjoy many types of food that begin with the letter “r” including ribs and roast beef on rye, but one could argue (or, in this case, “r”gue) that in the Jewish food scene the letter “r” is mostly commonly linked with the reliable, robust and righteous rugelach.

Rugelach is not a Jewish baked good. It’s a baked great.

Rugelach, like an eventful and unpredictable story, are full of twists. In fact, the term “rugelach” is a Yiddish word that literally means “little twists.” (Yes, the term “little twists” also could fairly describe a group of kindergartners dancing to Chubby Checker’s 1960 hit song.)

The Talmud does not specifically mention rugelach but it does mention a few items arguably in the same family of baked goods including “sponge breads, and honey breads, and cookies, and pan loaf” (Challah 1:4) and “sponge-like cakes, honey cakes, spiced cakes, pan-fried bread.” (Pesachim 37a) The Talmud even explains how certain of these items are baked: “What is pan-fried bread? Rabbi Yehoshua ben Levi said: This is boiled bread baked by ordinary homeowners in a deep frying pan.” (Pesachim 37a)

Many rugelach also are baked by the ordinary but most rugelach are nevertheless extraordinary. Creating quality rugelach is both art and science but the former is where the magic comes from. While chocolate and cinnamon are standard flavors, rugelach often are offered in a number of other varieties including raspberry, apricot, raisin and poppy seed. That said, you will rarely find mint, garlic or paprika rugelach or zucchini, horseradish or ghost pepper rugelach.

When discussing rugelach (a/k/a the Jewish croissant), one would be remiss in not also mentioning its big brother, the indomitable and unapologetic babka. It is not a cake, pie or strudel but the babka also is not bread or challah. The babka really is its own entity, straddling the line where bread ends and dessert begins. Together, the babka and rugelach make a formidable combination of deliciousness. These treats are not just baked goods, they’re baked greats. If a museum of Jewish food were erected, babka and rugelach would be unanimous first-ballot inductees in the dessert category and would likely be served at the post-induction reception and in every museum vending machine. (Yes, such a museum would be named the MONA, i.e., the Museum of Noshing Addicts, and would be run by an organization called the NOSH, i.e., the National Office of Second Helpings.)

One could argue that the babka and rugelach are more similar than different. Their relationship is not unlike that of other types of food wherein one is the miniature version of the other. Examples include the (i) hamburger and slider, (ii) hotdog and frank in a blanket, (iii) donut and munchkin and (iv) cake and cupcake. Other things in life also come in big and small sizes like a ventriloquist and his twin dummy.

If a synagogue kiddush features babka and rugelach, nothing else needs be served other than beverages and napkins. Even during the week, some Jews will travel miles out of their way, ignoring Waze and any other traffic warnings, just to feast on epic babka and/or rugelach. A perfect rugelach can reduce a grown-up to tears and can convince the most unruly youth to behave. Perfect rugelach or babka also can be used as a bargaining chip in the heated and contested negotiations. For example, one could easily imagine a:

One could argue that there are many famous statements in American history that still might make sense even if certain key terms were replaced with rugelach or babka. For example:

David Mamet's Question
Bechukotai 5782: Divine Retribution
Behar 5782: Working to Live or Living to Work?
The Wholeness of Being Broken
Comments
MOST POPULAR IN Cool Stuff
Our privacy policy