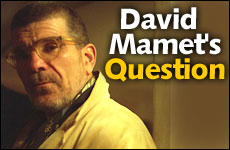 David Mamet's new book asks some tough questions about being Jewish in an age of anti-Semitism.

David Mamet has written a book, The Wicked Son: Anti-Semitism, Self-Hatred and the Jews (Shocken/Nextbook), that is by turns bold, courageous, and outrageous ― it is a book that calls Diaspora Jews to the table and asks: "In or out?"

"The underlying premise of the book," Mamet told me recently, "is to all Jews: If you can't say of your fellow Jews ' my people,' get out of my way. I don't want to know you, because our people are getting murdered, and to posit an exemption because of intellectual differences... is insane."

The Wicked Son is one of those books that, as I was reading it, made me think of all the people I would like to send a copy ― a few to friends who would enjoy it, but even more to those friends (or former friends) who might see themselves in Mamet's disquisition on anti-Semitism, and the attitudes of disaffected and disengaged Jews.

Mamet is the playwright who wrote Glengarry Glen Ross (for which he won the Pulitzer Prize), as well as American Buffalo, Speed-the-Plow, Oleanna, and Boston Marriage, among many others. He has directed several movies from his own screenplays, including House of Cards, Heist and The Spanish Prisoner, as well as writing (and re-writing) many other screenplays. He has published three novels, including The Old Religion (about the Leo Frank case), as well as children's books and essay collections. He is currently the co-creator and executive producer of The Unit, a one-hour dramatic series that airs on CBS on Tuesdays at 9 p.m.

When I spoke with Mamet recently, he explained that he has been pondering the idea of Jewish passivity for 15 years (beginning around the time he made Homicide, a film about a Jewish policeman and his issues of identity and self-loathing).

The Wicked Son is a reference to the parable told as part of the Passover Seder ― of four sons, one wise, one wicked, one simple and the other too young to even ask a question. As part of the Seder we are told how best to answer these four different responses to the story of the Jews' emancipation from Egypt.

Mamet identifies the many contemporary forms of anti-Semitism, unmasks those who support it or who, passively, refuse to stand up against it.

The Wicked Son identifies anti-Semitism and who refuses to stand up against it.

"Anti-Semitism is a sickness, and its playbook is extremely limited," he told me. The Wicked Son exposes several canards used by anti-Semites of all stripes ― double standards, faulty logic ― demonstrating that the arguments used by today's anti-Semites haven't changed much throughout Jewish history.

Mamet also believes it is self-loathing that animates Jews who don't glory in their heritage, culture and tradition and who, worse yet, put forward the anti-Semites' own arguments.

Mamet writes that his book is directed, "To the wicked son, who asks ' What does all this mean to you?'; to the Jews who, in the '70s envied the Black Power Movement; who, in the '90s, envied the Palestinians; who weep at "Exodus" but jeer at the Israel Defense Forces; who nod when Tevye praises tradition but fidget through the Seder; who might take your curiosity to a dogfight, or an opium den, but find ludicrous the notion of a visit to the synagogue; whose favorite Jew is Anne Frank and whose second-favorite does not exist; who are humble in their desire to learn about Kwanzaa and proud of their ignorance of Tu B'Shvat; who bow their head reverently at a baptism and have never attended a bris. To you, who find your religion and race repulsive, your ignorance of your history a satisfaction, here is a book from your brother."

Mamet is not so much concerned about the reason for anti-Semitism as he is with the fact it exists. He frankly acknowledges it, exposes it and confronts it.

"The most chilling thing I have ever seen in a movie is this spectacular documentary, One Day in September, about the Munich massacre," Mamet told me. "There's a scene, a long lens shot of one part of the compound that is under siege ― it's ringed by the German security police ― and inside the ring of the German security police is the building where Arafat's Black September people have kidnapped and are murdering the Jewish athletes. Then the camera pans over ' x' degrees to the right and on the other side of the fence is the Olympic athletes' compound, where you see people swimming in the Olympic pool, diving into the Olympic pool, and playing ping pong and sunning themselves." For Mamet, that is the state of world today.

Although Mamet writes about Jewish ritual, bar mitzvahs and synagogues, he wanted to make clear that the point of the book is not to criticize someone's practice (or lack thereof).

"If someone says 'I'm Jewish, but I'm not that Jewish,' who asked? That's none of my business."

"Does anyone ask an Irish American," Mamet asks, "how Irish they are? Or a Greek American or a Mexican American? They each love America and they cherish their heritage. To what other group do we say: Where do your loyalties lie?"

'Jewish Guilt' is not a side effect of being Jewish, but of being insufficiently Jewish.

On the other hand: "If someone says 'I'm Jewish but I'm not that Jewish,' that is in the nature of a confession not a description," Mamet said. "It connotes a sense of shame." In other words, a manifestation of Jewish self-loathing.

"The point of my book is that the disaffected person may consider himself the victim of too much Judaism, but someone who makes that confession has too little Judaism." Mamet writes, "'Jewish Guilt' is not a side effect of being Jewish, but of being insufficiently Jewish. Buddhism will not cure it, self-help will not cure it, good works will not cure it, A course in miracles will not cure it ― all of these, ranging from religion to nostrum, cannot eradicate the lapsed Jew's sense of being lost. For he is lost."

We live in a time when anti-Semitism is no longer a matter of quotas or numerus clauses, of Nuremberg laws, or pogroms. We live in a country where one can say with conviction: It can't happen here. Where one can argue that there has never been a better time or a better country in which to be a Jew. But that doesn't mean that anti-Semitism is not occurring or that Jews are not being murdered in Pakistan (Daniel Pearl), France (Ilan Halmi), or in Israel (I regret that the names are too many to list) for the crime of being a Jew, and that the casual anti-Semitism of certain academics, or in foreign newspapers is as any less pernicious or dangerous than what is being spewed in Iran or in radical mosques the world over. History has taught us that words lead to actions. In times like these, as Mamet might ask, should we be more Jewish or less Jewish?

Whether you read David Mamet's book or not, whether you find it right on or over the top, whether you buy a copy for your friends to please them or infuriate them, the question, remains:

This article was edited by Jewlarious. To read the complete version go www.tommywood.com

Tom Teicholz is a film producer in Los Angeles. Everywhere else, he's an author and journalist who has written for The New York Times Sunday Magazine, Interview and The Forward. Check out the website www.tommywood.com

Two Jews Walk Out of Israel

Funny Business
In the Shadow of David and Goliath
Where Do the Laws of Nature Come From?
Saadiah Gaon, Rashi and Maimonides: How Three Rabbis Revolutionized Judaism
Comments