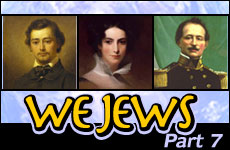 From This land is Our Land through to the Civil War, We Jews served with distinction.

In my article“The Yiddish Are Coming” we looked at Jews in the American Revolution and came to this conclusion: Without We Jews, we’d be “queuing” for our fish ’n chips from the local “chippy.” But of course the American Revolution was just the start of our mighty contributions. From Bernard Baruch, Ernestine Rose, Benjamin Cardoza, Maud Nathan, to David “Mickey” Marcus, brilliant, sacrificial, and yes, sometimes funny, We Jews changed the U.S. landscape. Here are a few of my lesser known faves.

We Jews changed the U.S. landscape. Here are a few of my lesser known faves.

The first known Jew on Southern soil was Joachim Gans, from Prague, who accompanied Sir Walter Raleigh on his 1585 voyage to the New World. A fisherman he wasn’t. But Gans established the first smelting furnace in what is now North Carolina. Later Jewish arrivals brought the “traveling dry goods store” to “the sticks,” the cotton gin to Alabama, and the peach to Georgia. Even while “wandering,” at least we had the courtesy to bring a little something when we “landed.”

Spanish Jew, Luis Moses Gomez, a successful fur trader, built a flintstone blockhouse, just north of Newburgh, New York, as part of a trading station. Erected around 1720, it’s the first known free-standing Jewish home in the U.S. Residents of Ulster County gave him the dubious honor of calling him “Gomez the Jew,” and the adjoining area, Jew’s Creek. Personally, I would’ve preferred, “Ai! Ai! Ai! Look at Gomez ............... a house right on the water.”

On State Road 45 in Pennsylvania a marker reads: “Aaronsburg, named for Aaron Levy, founded 1786"— the first town planned by and named for an American Jew! The savvy, humanist, came to America from Holland as a teen and established Aaronsburg, hoping to make it a center of government and commerce. In 1789, he gave the Salem Lutheran Church two lots to demonstrate interfaith brotherhood. One hundred and fifty years later, the Church offered a kiddush cup to New York’s Shearith Israel, symbolizing the return of the gift. OK, yes. Today, with fewer than 400 dwellers, it isn’t the center of anything, like a Wall Street or a Capitol Hill, but Aaronsburg still stands for brotherhood.

It wasn’t easy rising from cabin boy to Commodore. Especially if you were a Jew in the early 1800s. And most especially, if you opened your pisk about beatings in the Navy. Yet that’s exactly what Levy did, who had become the highest ranking officer in the Navy, having distinguished himself in the War of 1812. For his opposition to corporal punishment, he was court marshaled, which was overturned by President Tyler. As if this weren’t enough, the generous and patriotic Levy, did what no other citizen had done before him: Gave the country a gift. A big one. The statue of Thomas Jefferson in the Capitol rotunda! A huge admirer, Levy also bought Jefferson’s estate, Monticello, and willed the historic home to the American people. In 1959, the Navy's oldest Jewish Chapel in Norfolk, Virginia, was renamed the Commodore Levy Chapel, and in 2005, the U.S. Naval Academy opened a Jewish Chapel also named for Levy. At the dedication, The Navy Glee Club, sang the Navy Hymn, and “Adon Olam" in perfect Hebrew!

Rebecca Gratz the first U.S. Jewish woman college student (now Franklin & Marshall) was born in 1781, into the prestigious Philadelphia Gratz family. Along with her ground-breaking work for orphans, she founded the Jewish Sunday School system in 1838! Her friend, Washington Irving, told Sir Walter Scott of her inner and outer beauty, who then immortalized her as the model for Rebecca in Ivanhoe.

In 1817, watchmaker Joseph Jonas shlepped from New York to Ohio – no easy feat– becoming the first permanent Jewish settler in “the wilds.” Not a lot to do or pals to talk to. Worse, how many watches could they use in the boonies? But more, there weren’t enough Jews for a minyan within hundreds of miles. Two years it took him to persuade his brothers and two other Jews to join him. Minyan short, nevertheless, in 1819, prayers rang out in the “outback” when this tiny group celebrated Rosh Hashanah! Things picked up. In 1824, Jonas established the first Jewish congregation in Ohio, Kahal haKodesh Bene Israel, (now, the Rockdale Avenue Temple). Jonas became a leading macher, and “made time” to serve in the Ohio legislature during the 1860s.

America’s first official photographer on a scientific expedition was Sephardic Jew, Solomon Nunes Carvalho, who accompanied John C. Fremont when, in 1853, he sought to map the route for the transcontinental railway. Carvalho, born in 1815 in South Carolina, was chosen because of his expertise in daguerreotype photography. This historical contribution was enough, but Carvalho had more – much more to offer. He was also a portrait painter (who captured Lincoln on canvass), an inventor, and religious philosopher who was later active in Jewish affairs in Baltimore, and New York.

When most of us think of the early Supreme Court, Louis D. Brandeis jumps to mind as the first Jewish nominee. Wrong. In 1853, Southerner Judah Philip Benjamin declined the nomination by President Fillmore. The ardent Southerner preferred to remain a Senator from Louisiana – and deliver Louisiana’s secession speech! (There were Jews on both sides of the conflict.) He was such a macher in the Confederacy as Attorney General, and Secretary of State, and War in Jefferson Davis’s Cabinet, that he became the face on the Confederate two-dollar bill. After the War, when his own bill couldn’t buy him a good boiled chicken, Benjamin fled to England, where he was finally admitted to the British bar at age 55. His rep in Britain grew and he lived out his life as a VIPPY attorney, proving once again, MOTs just don’t quit!

In 1861, only Christians could be chaplains. This didn’t bode well with the mostly Jewish 65th Regiment of the Fifth Pennsylvania Cavalry (Cameron’s Dragoons). The 1,200 men did things their way by electing 30-year-old Michael Mitchell Allen, a Philadelphia cantor, chaplain! Complaints flew from the Calvary. With his usual common sense, President Lincoln pushed legislation allowing non-Christians the role, which was passed in 1862, thanks in part, to the courage and conviction of the “first” Jewish chaplain, and his “Jewish” regiment.

When Lincoln became president in 1861, he received an American flag (or painting of a replica) with Hebrew verses that came from the Book of Joshua. The gift was from Abraham Kohn , later a city clerk in Chicago. In 1860, a meeting between the men inspired Kohn to think of Lincoln as an American Moses. After the assassination on April 14, 1865, Kohn was one of the citizens appointed to escort the train bearing Lincoln’s body to Chicago.

A Jew & The Declaration of Independence

President Lincoln was a frequent visitor to read and send field dispatches. It was young Edward Rosewater, with the Telegraphers Corps of the Union Army, who transmitted The President’s Gettysburg Address in 1863. After the war, Rosewater who had a way with words – even if they weren’t his own – founded the Omaha Daily Bee!

At the Foot of the Prez

Lincoln: “My chiropodist, Isachar Zacharie , has so many times ‘put me upon my feet' that I would have no objection to giving his countrymen ‘a leg up.'"

When the greatest chiropodist in America meets the biggest, most important feet in America, what do you get? A perfect fit! Which was the case between President Lincoln and Isachar Zacharie, a Jew who worked his way up, toe-by-toe, through Henry Clay, John C. Calhoun, and Secretary of War, Stanton. When Zacharie soothed Lincoln’s tootsies, the two became buds, and Zacharie took on another role: peacemaker between North and South. His “plan” supposedly involved conquering Mexico. OK, he “tripped” up. But, his was an important “step” in establishing close ties between American leaders and Jews.

Simon Wolf, whose friends included both Grant and Sherman, published the names of 7,000 Jewish Civil War veterans, in 1895. And while on the subject, Ulysses S. Grant met with Wolf at the White House in 1869 regarding the harsh treatment of Russian Jews, resulting in Grant sending a letter to the czar. Wolf honored him by inviting the President to be godfather at his son’s circumcision and naming the infant Adolph Grant Wolf. Grant’s earlier feelings toward Jews came under fire based on an exclusionary General Order in 1862 (expelling Jews from areas in Tennessee. Mississippi, Kentucky). Prominent Jews (no doubt Wolf) considered this more a judgment lapse than anti-Semitism. Hmmmm. The Emmes? Who knows?