Traveling with My Father 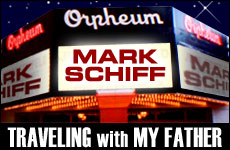 Mark Schiff's parents loved his act. In his father's final days, it brought them all closer together.

When I found out my dad was dying of cancer, I spent a lot of time in New York with him and my mom instead of Los Angeles, where I was living at the time. Road comics have no office. So New York became the base I booked myself out of.

My dad loved my act. He thought I was the funniest person in the world. I guess you are the funniest person in the world if someone thinks you are. My dad and mom came to see me at least a hundred times before he died in 1988. He would come and see me wherever I was doing a show. And he always got dressed up for the show. I would say, "Dad, you don't have to wear a sport coat. I'm at the Comic Strip, not the Copa."

"I don't care if I'm going out on a Saturday night with your mother. I'm not going to look like a slob."

I remember him asking me to do certain bits about my mother. He loved it when I talked about how they'd been married so long she'd sucked the brain out of his head.

"She loves when you talk about her. Do me a favor. Do that thing about her cleaning the house." My dad really loved my mom. He was just so proud of her. And with me being an only child, we were his life.

I remember that my dad had just gotten out of a hospice and they sent him back home to die. The night he came home, I had a show to do. I said, "Dad, maybe I should stay home instead."

About three days later, I had this gig about two hours away in upstate New York. That afternoon we were all sitting at the dining room table when my dad said in the weakest of voices, "Can I come with you tonight? I'd really like to see your show." I knew what he was saying. He was saying, "I really want to see you one more time before I die."

I asked my mom what she thought. "If you think you can handle him, then fine."

My dad was very weak, but he could go a short distance if you helped him. I said, "Yeah, I can do it."

That night as we were leaving, my mom said, "You boys have a nice time tonight. I've got things to do here at home. Call me when you get there." So off we headed to my gig. It was a cold winter night, and a light snow fell for most of the drive. We didn't talk much on the way up. As I remember, my dad slept most of the way anyway. I kept looking at him as he slept in the car. I cried most of the way up, but that was okay. I was with my dad.

When we got to the hotel parking lot, we noticed that it was empty except for three or four cars. "Hey Marko," my dad said, "can I drive around the lot?"

"Thank you for being a great father." Then he asked me to do the routine about my mother that he always liked. I did them all for him.

My dad loved to drive. He was the one who'd taught me to drive just a few years earlier in the empty parking lots of New York on Sunday mornings. He'd done every single bit of the driving for the 39 years he was married to my mother. She never drove once. Now he was asking me to let him drive. "Sure dad."

So I got him around to the driver's seat and for two minutes he drove very slowly around the lot. "That's great," he said.

I helped him park and we checked into the hotel and went to our room. It was still early so I helped him off with his pants and he took a nap. I then called my mother, told her we were safe, and she started crying. "Take good care of him. I love him."

At about 8 pm we went over to the club, which was attached to the hotel. Before we went in, my dad said, "Thank you for taking me."

"You're welcome," I said. "Thank you for being a great father." Then he asked me to do the routine about my mother that he always liked. I did them all for him.

A few weeks later, he died. About a year later, my mother came to see me work. On the way to the club, she asked me to do the routines about my father. I kissed her on the head and said sure. I also did the ones about her because I knew he would have wanted to hear them.

The Great Cholent Divide
Is Grease the Word?
Dried Fruit Compote
Scientific Curiosity and the Divine Encounter
Comments
MOST POPULAR IN Jewlarious
Our privacy policy
Aish.com Is Looking for Great Writers