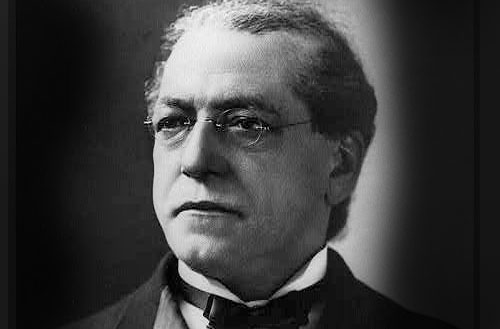 The story of Samuel Gompers: father of the American labor and trade union movement.

For most people Labor Day is the time we give those hazy lazy days of summer a huge send-off with picnics, barbecues and fireworks. It’s also bittersweet as we prepare to double our workload, send the kinder back to school, face holiday stress …….. and shop for mammoth parkas, and snow shovels.

His Jewish upbringing contributed to his lifelong passion for justice in the work place.

Yet, few of us actually pay homage to the holiday itself and its founder, the most important labor advocate in American history who transformed working conditions foverver: Samuel Gompers. For We Jews, there is special pride in recognizing Gompers, as he, too was a Jew.

Jews and labor, much like Jews and chicken soup, have been inexorably tied for years in Europe. This fervor spread to America, thanks to the London-born Gompers, the son of Solomon and Sarah, nee Rood. His childhood and teachings in Judaism no doubt contributed to his life long passion for justice in the work place.

Samuel Gompers, born on January 27, 1850 in a London tenement, came from Dutch-Jewish stock. The family settled in England for financial reasons, but life wasn’t much better for his dad, a cigar maker whose paltry salary couldn’t be stretched beyond a one room flat to shelter his brood of six.

School for little Samuel was a luxury. While he was at the top of his class at the Jewish Free School in London, he had to quit at age ten to add to the family’s larder. After a short apprenticeship as a shoemaker he soon switched to his father’s cigar-making trade. But the boy, hungry for knowledge, went to night school learning Hebrew and studying the Talmud, which he later said, was similar to studying law.

Poverty, the experience of being a child laborer, and his Jewish teachings primed the boy to become the major force – for the workforce.

Seeking new opportunities, the family borrowed the funds to immigrate to America and settled in Manhattan's Lower East Side in 1863 when Samuel was just 13. Initially, Samuel worked with dad, manufacturing cigars at home, but the teen wanted more, and to get it, he would have to teach himself. He and his friends formed a debating club, which honed his skills as a public speaker and taught him parliamentary procedure. It also put him contact with other upwardly mobile peers, who would eventually play a role in his mission.

By age 14, he joined the Cigar Makers International Union [CMIU]. (Ten years later, in 1874, Gompers helped found local 144 of the CMIU, and became its president, remaining a life long member).

Throughout the 1870’s, he continued to learn, becoming active in the International Workingman's Association, the Economic and Sociological Club, and the Workingman's Party of the United States. These alliances cemented his commitment to labor unionism. During this time, he also made another life-changing commitment when, at age 17, he married Sophia Julian then became a father the following year. The close couple had eight children and remained devoted until her death.

In 1881, Gompers was a delegate for the CMIU, at a conference to found the Federation of Organized Trade and Labor Unions [FOTLU] of the USA and Canada. Its objective was to influence, prepare legislation, and lobby Congress on behalf of labor. Gompers took a leadership role. As an officer of FOTLU (1881 to 1886) he focused on compulsory school attendance laws, regulation of child labor, the eight hour day, higher wages, safe and sanitary working conditions, and workplace democracy.

When the FOTLU was reconstituted in 1886 as the American Federation of Labor [AFL] Gompers became its president, a position he held until his death (with one short sabbatical) in 1924. During the early days the AFL was a tiny organization based in an 8 by 10 room in a shed. Its treasury was a whopping $160, and his son was the office boy. During that time Gompers also served as a vice president in the CMIU and played an active role in the New York State Workingman's Assembly.

Politically, he was initially sympathetic to the precepts of socialism, but gradually adopted a more conservative approach to the dismay of more radical labor organizers. Gompers was devoted to capitalism and collective bargaining, preaching moderation and stressing cooperation which he believed was pivotal to emancipating labor. Internally, he promoted harmony among the craft unions to minimize jurisdictional battles. By 1904, 18 years after the fledgling AFL was founded, it claimed 1.7 of the two million union members in the U. S. and by the 1920s membership had exploded to millions.*

In World War 1, he supported President Woodrow Wilson's policies and organized the War Committee on Labor, including representatives from both labor and business that established an unprecedented wartime labor policy. At the end of the War, Wilson appointed Gompers to the Commission on International Labor Legislation at the Versailles Peace Conference, where he helped to create what became the International Labor Organization (ILO), under the League of Nations.

Gompers was well known and respected for his integrity, his generosity and his willingness to stand up to power. The first six years of his presidency he served without a salary, and also paid many of his own expenses.

For almost four decades, Gompers worked tirelessly until his mission had been accomplished. His belief led to the development of procedures for collective bargaining and contracts between labor and management which are still in use today.

When Samuel Gompers died on December 13, 1924, his funeral was a national event. President Taft sent a message and members of the Government, and Governor Smith of New York were among those present. Tens of thousands of people lined the streets as the funeral cortege passed. The rabbi who conducted the funeral service said that knowing Gompers as he did, he felt that “his idealism, his unfaltering courage, and love of his fellow-men were nurtured by his Jewish past. America remade this immigrant lad even as she has remade multitudes of immigrant sons and daughters. His career was an American epic. Gompers died a poor man, but he had left a great cause. He was the pioneer of the American Labor movement and he played a great and honorable part in liberating men from bondage.”

And there was one more achievement. It was Samuel Gompers who created Labor Day to be celebrated on the first Monday in September. So hoist a cup of Manischewitz in honor of the Jewish immigrant who forever changed the lives of the American worker.

*In 1955, The AFL merged with the Congress of Industrial Organizations to form the AFL-CIO, the largest labor organization in the world.

A Brief History of Jewish Pirates

Come on Down!
Should I Break Up, Get Engaged or Keep Dating?
Time Is Your Precious Commodity
A Constant World in Flux
Comments
MOST POPULAR IN Jewlarious
Our privacy policy