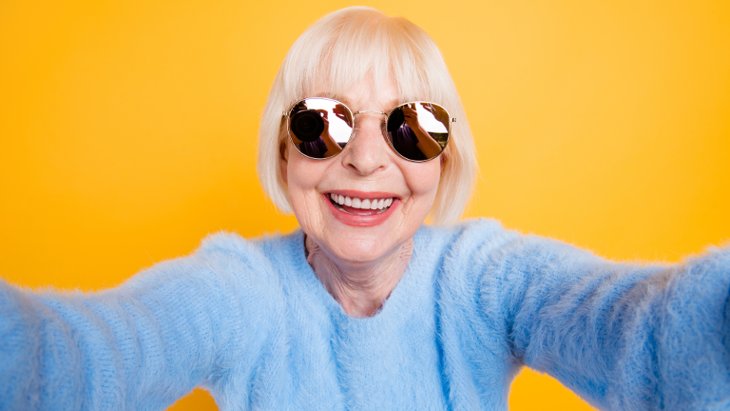 Are we still funny? Funnier! Then again it could be a “senior moment.”

I just had another “fire-extinguisher” Birthday. You know you’re getting on a bit when Emergency Services are called to put your candles out or you out – from blowing out a lung. The interesting thing is I have now reached “half-life.” I’ll explain. As we age, we start counting our age in fractions. “Darling, would you believe I’ll be 87 and a quarter in 13 days!” The only people who count age in fractions are either toddlers (“I ‘fwee’ and one half”) or those proudly marking off the time when the smiling weatherman announces: “ … and in local news, Ira Shmelowitz turned 100 today! Happy Birthday, Mr. Shemlowitz, who made hats for The Roosevelts – both FDR and Teddy!” Are we still funny? Funnier! Then again it could be a “senior moment.”

A widowed Mama was talking about her recent break-up with the businessman she was seeing, telling all to her married daughter, Sheila.

“And,” added Mama, “we both love our Social Security checks and hate each other.”

A scientist was giving a lecture at a Jewish senior center, explaining that in four billion years the sun will exhaust itself of fuel, burn out and all life as we know it in the solar system will end.

Upset, Hymie Handelman yelled out, "Oy! Is there anything we can do? Form a congressional committee or donate money for research?!"

The scientist replied: "Sir, why are you so upset? This won't happen for four billion years."

"Oyyy, denks God," said Hymie, relieved. "I thought you said four and a half million years."

Uncle Sol decided to party, even though he just passed his 90th birthday. The super senior put on his best blue pin-striped suit, Pierre Cardin tie shoes and looked in the mirror.

“Eh, Solly you old dog, still a lady killer,” he said to himself, putting a carnation in his lapel, as he made his way to the lounge in the Fontainebleau Hotel.

Seeing a lovely lady in her late eighties. Sol strolled over, took the stool beside her and ordered a Dr. Pepper. When it arrived, he sipped it slowly, turned slyly to the lady and asked:

“So darling, do I come here very often?”

Isaac, through hard work, became wealthy. As he lay dying, he talked to his wife, Sophie.

“First, the business I leave to Morty, our eldest.”

“Morty!” Sophie protested. “Morty’s always with the girls. Better to leave it to Jeffrey.”

“Alright. The summer house I leave to our Ava.”

“She’s not spoiled enough? Leave it to Morty.”

Finally, summoning his last ounce of strength, Isaac sighed, “Sophie ... who’s dying here – me or you?”

Maria, an Italian; Athena, a Greek; and Esther, a Jew, all senior citizens, were seated on a park bench discussing what they would do if their doctor gave them only three months to live.

Maria quickly answered: “Hmm. I’d eat my way through Rome. Every cannelloni would be in my mouth.”

Athena said: “I’d cruise the islands and break dishes with as many 25-year-old fishermen I could find! And you, Esther?”

“Me, darlings? I’d call my son-in-law the doctor and get a second opinion.”

SO IF NOT NOW, WHEN?

“A divorce?” asked the shocked lawyer.

“Well ... how long have you been married?” he asked in disbelief.

“Seventy years?! Why a divorce now?”

Fleigelman, who knew no English, opened a bank account and signed with two X’s as was the custom. A few years later, having done very well for himself, he came once again to the bank with a big deposit.

“Mr. Fleigelman,” asked the teller, “Why do you now use three Xs?”

Fleigelman got red in the face. “Not me, it’s my wife. You know women, always with the fancy-shmancy” he said. “Now that we got a few kopeks, she wants I should take on a middle name.”

Eighty-year-old Fishman went with a tour group to Israel. On his second day, he got separated and the bus left. So, he set out to find it.

After schlepping a mile in the boiling heat he started murmuring, “Vater ... vater ...” The sun baked his skin; the sand caused him to stumble. Just as he was sure he was a goner, a small house appeared on the horizon. Fishman crawled over and scratched at the door. A woman opened it, and Fishman, on his knees, whispered, " ... vater ... vater!"

"Of course!" said the woman, who ran, returning with a glass. “Here!”

Brightening, Fishman stared, “Did you let it run a little?"

Eli, age 92 and Shirley, age 89, were talking wedding plans when they passed a drugstore.

They walked in and pulled over the pharmacist.

“Of course,” said the pharmacist.”

“And medicine for circulation?” The pharmacist nodded.

“What about adult diapers?” asked Shirley.

“And for memory problems?” The pharmacist again nodded.

“You sell wheelchairs and walkers?”

“Perfect!” said Eli. “So where do we register for wedding gifts?”

A Miami officer pulled over 86-year-old Mrs. Posner because her signals were confusing.

“First you put your hand up, like you’re turning left, then you wave your hand up and down, then you turn right --” said the officer.

“Sonny, I decided not to turn left,” she explained.

“Then why the up and down?” the officer asked.

Puttin' on the Shmutz