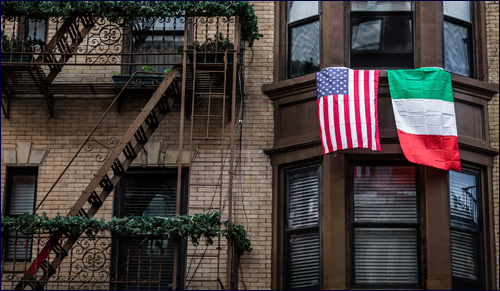 Differences I’ve observed between spending Shabbat in Italy and Shabbos in America.

Imagine you want to host someone from a Shabbat meal, and you have 2 spots available for dinner next Friday night. What would you do?

If you are in the United States, you would likely call your Rabbi or the shul welcoming committee and let them know.

If you are in Italy, you would probably walk to shul and hope to find last minute guests.

I live in Bologna Italy and travel frequently so I’ve actually become quite an expert at deciphering these differences.

If you are new in town in the States, when you walk into shul (or after the services), the Rabbi or welcoming committee appointee will likely approach you and ask you whether you already have an invitation. If you say no, you will be asked whether you are a vegetarian or have any allergies and how many spots you need. In a matter of seconds, they will probably set you up for dinner, lunch and possibly seuda shlishit (the third meal). Then your host will introduce themselves, smiling and thanking you for accepting their invitation.

Whereas if you are new in town in Italy… you will still be warmly welcomed by the local community (which will probably look quite small in comparison)… and people will introduce themselves in broken English or reasonable Hebrew. Sometimes you will receive an invitation, but less people, so less chances – it’s a numbers game.

There are many aspects in common between being a Shabbos guest in Italy or America, first and foremost, quantities of food.

There are many other aspects in common between being a Shabbos guest in Italy or America, first and foremost, quantities of food.

In Italy you can typically expect to be served two kinds of pasta, one course of fish, two courses of meat, two or three vegetable sides, and according to the recent trend, often also hummus or tehina sauce, then dessert and fruit, coffee. Along with apologies for serving such a poor meal (“you should come again and we’ll have a proper meal, bli neder”).

In America, it’s probably going to be a soup and some other starter, followed by gefilte fish, cholent, roast chicken, brisket, two or three vegetable sides as well, dessert and whiskey. Along with apologies for serving such a poor meal (“you should come again and we’ll have a proper meal, bli neder”).

The Italians would then report enthusiastically about how the American coreligionists are so numerous and welcoming. Yes, gefilte fish is not everybody’s favorite, but they treat you like a king /queen – something we should learn from. On the flip side, they eat too much… How could we watch our weight if we lived there?

The Americans would report that Italian Jews are small in numbers but stubbornly proud of their tradition. Yes, they might hardly speak any English, but they’ll find a way to make you feel welcome. If you get an invitation for a meal, be prepared to eat a lot and well, although unfortunately they don’t serve gefilte fish. On the flip side, they eat too much… How could we watch our weight if we lived there?

So, after all, how can Jews watch their weight, in any given country? My guess is we do NOT. Someone much Higher than us, does it for us. We may have to be more health conscious during the week, but Shabbat food is calories-free, isn’t that what they say? Dangerous belief? Sure. But then how do you explain that wherever you go in the world, you find fellow Jews ready to feed you as if there’s no tomorrow – and yet you can fly back home and still fit into a plane seat?

From a personal point of view, I think it’s funny how I, an Italian Jew, love gefilte fish and cholent (along with Italian and Sephardic foods), whereas my Ashkenazi wife can’t stand either. I hope I don’t get in trouble for sharing that little secret!

Differences are not only food related. The prayer services are also quite different.

In Italy, the Hazan chants the entire service, except a very few paragraphs, whereas in America, according to the Ashkenazi tradition, the Hazan only chants the beginning and the end of every paragraph. As a result, when you come to shul in Italy, you don’t need to worry about missing the mark, you can relax during the prayer, follow your train of thought… and then if you lose your place, well, you may well end up missing the mark.

On the other hand, for an Italian in America it will be difficult to constantly have to read every single word, without relying on the Hazan. If you lose your place, everybody around you could probably tell you where they are in the prayer services, but you will have to ask in English. My high school teacher was right – you never know when you will be abroad and need to communicate.

As Shabbat is over, it’s Sunday and time to do some shopping.

Americans would love to buy some typical Italian food, but there is hardly anything available in the kosher version, so they’ll settle for some clothing and fine art pieces.

Italians, on the other hand have a chance to buy a lot kosher food for a reasonable price, things a Jewish person dreams of back at home. If you are an Italian Jew and you keep kosher, you have three possibilities: You buy your food in Israel; you buy your food in the States; you go broke. Very pious Jews do all of the above to make sure they are on the safe side.

So typically you leave with an extra empty suitcase and spend the last day grocery shopping for your family and friends. You stuff it with dry meat, sweets, snacks, bars, cereals… believe it or not, the last time I came back from Israel I had a frozen duck in my baggage. A kosher duck in Italy is simply a forbidden dream. And when my wife recently went to visit her family in California she had a very hard time making me give up the idea of her coming back with another duck ( in case you were wondering, yes, I like duck!). My in-laws - whom I have not yet forgiven, were afraid she might be stuck at customs. How inconsiderate of them!

So there you have but a few of the differences and similarities of spending Shabbat in Italy, or Shabbos (as they usually call it) in America. Either way, if you are ever coming to Bologna, Italy, look me up. And if you want to bring me a Shabbos gift, I have only one request: kosher duck.

8 Jewish Movies for Oscar Consideration
Korach 5782: Visit to Lift the Spirit
That Time The Ivy League Found A Way To Limit Jewish Enrollment
Would You Rather Be Right or Happy?
Comments
MOST POPULAR IN Jewlarious
Our privacy policy