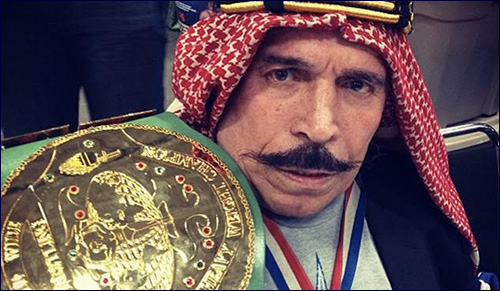 JEWLARIOUS SATIRE: The P5+1 Nations have signed a deal with the Islamic Republic of Iran known as the “Joint Comprehensive Plan of Action” allowing the Iranian regime to continue its nuclear program under an agreed upon framework. Critics and supporters of all stripes have come out against and support of the deal respectively. Now, after a period of prolonged silence, former professional wrestler Hossein Khosrow Ali Vaziri, better known by his ring name the Iron Sheik has broken his silence and come out strongly against the deal. Here are his ten reasons why:

9. During the Iron Sheik’s wrestling days, the only thing that kept the wrestlers in line was fear of World Wrestling Federation Commissioner Vince McMahon; in the international arena, Ban Ki Moon…not so much

8. Netanyahu has likened Iran without financial sanctions to a terrorist regime on steroids and if there’s one thing the Iron Sheik knows all too well, it is the destructive power of steroids

7. The Iron Sheik doesn’t want to have to compete for the title of Iran’s most prolific Twitter star with the Ayatollah

6. One thing he learned about his 6 year wrestling partnership with Nikolai Volkoff: No matter what, never trust the Russians

5. He knows that Iran won’t be using its $150 Billion “signing bonus” for worthwhile endeavours like he did with his signing bonus he received upon entering the WWF, namely, lots of tanning oil and hookah

4. The Iron Sheik laughs at the idea of “snap back” sanctions; the only thing from Iran that “snaps back” is the Iron Sheik’s dreaded “camel clutch” manoeuver

3. Over his wrestling career he developed a rule: never trust the guy with the crazy hair. As it happens, Energy Secretary Ernest Moniz has the crazy hair

2. The Iron Sheik knows firsthand from his bouts with Hulk Hogan – being on the receiving end of an atomic (leg) drop is no picnic

1. When wrestlers say they want to “kill you” they mean that they want to body slam you then pin you to the mat for 3 seconds; when the Ayatollah says he wants to kill you – it’s not a figure of speech

Judy for President
What Makes Eli Run?
The Tyranny of Materialism
Science Enters the Mysterious Inner World of Consciousness
Comments
MOST POPULAR IN Jewlarious
Our privacy policy