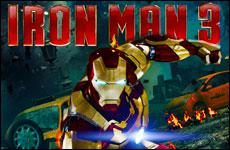 Tony Stark has a message for the Jewish people just in time for Shavuot.

I know you know that. He said it right at the end of his first movie, for the benefit of those who weren’t paying attention: “I am Iron Man.” He puts on suits that he made himself and fights bad guys and gets into misunderstandings with good guys.

“Wow, is that Iron Man?” a kid asks him, seeing his full suit of armor sitting limply on a sofa, like a scene out of Weekend at Bernie’s.

For a huge chunk of the movie, Tony is stranded in the middle of nowhere with a big, non-functioning suit that he can’t very well drag through airport security. He has to repair it and wait for it to charge, which is always the biggest problem with technology – being tied to a wall with an eye on the battery indicator. But in the meantime, he manages to use his inventiveness and ingenuity to track down the Mandarin – a terrorist who likes hearing himself talk on American TV.

The point of the new Iron Man movie is that Tony Stark is actually Iron Man, even without the suits. The fact that the suits are also made out of iron is a happy coincidence.

The Mandarin, meanwhile, is definitely not what he seems on the outside. For one thing, he’s not even Chinese. In fact, he’s nothing but makeup and a ponytail.

But Tony shows that it’s not the clothes that make the man. If anything, it’s the man who makes the clothes. 42 suits, to be exact. He spent the entire time between the end of Avengers and the beginning of Iron Man 3 obsessively building armor for every scenario. To be fair, he wears them while fighting and getting into misunderstandings, and they probably get pretty ripe.

On the surface, the expression “the clothes make the man” doesn’t really seem like a Jewish concept. We’re always taught that it’s what’s inside that counts. As your mother has told you numerous times, you can always change your clothes. If clothes made the man, then a wolf in sheep’s clothing would just be a sheep. Clothing is just superficial, right? At best, it’s shorthand for letting people know, when they first meet you, what they’re going to find on the inside if they stick around long enough.

But on the other hand, Jews put their faith in clothing all the time. Back when the Temple had four walls, the kohanim (priests) wore special clothes. When Jacob wanted to express love for his son, Joseph, he made a special shirt, and all of Joseph’s brothers were so angry they decided to sell him. And when Jacob’s father, Isaac, was getting old and wanted to give Esau a blessing, Jacob’s mother, Rebecca, gave Jacob special clothes to fool his father into blessing him instead, while Esau was off trying to figure out how to hunt wild game with a kosher butcher’s knife. And we specifically wear certain clothes for certain rituals – the tallit (prayer shawl), tefillin, a yarmulke, a white kittel on Passover so we have something on which to spill our wine, and sneakers with our suits on Yom Kippur in case we want to go jogging later. So it’s not like we don’t place any value on clothes.

So how are we to reconcile this?

The case of Jacob seems pretty peculiar, though. Jacob was wearing Esau’s clothes to fool his father, but his father was blind. So who was he trying to fool?

The answer is that he was trying to fool himself. Rebecca hoped that if he wore Esau’s clothes, he’d act more like Esau and be able to sell the part. As it was, Isaac didn’t totally buy it at first.

There was a recent study at Northwestern University in which they asked one group of people to solve complicated math problems while wearing lab coats, and another group to solve problems without them. The lab coat group did better. They also asked a third group to solve the problems in lab coats, but told them they were actually butcher’s coats. The butchers group didn’t do any better than the group without coats.

In other words, researchers proved that if you’re wearing a lab coat, people will believe what you say – not just because they assume you know what you’re talking about, but because you say it with the focus and confidence of someone who does.

We don’t even know if this was a real study, but when the researchers announced it, they were wearing lab coats. So it’s probably true.

Basically, if you wear specific clothes, the hope is that you eventually start acting like someone who would wear those clothes. If you put on a business suit, you act more composed than you do while wearing sweat pants, although a lot of that is based primarily around not wanting to get dirty. And every single one of us has at some point felt cooler and calmer immediately after putting on sunglasses.

So yes, “clothes make the man”, but not in the way that you’d think. Clothing actually makes you into the kind of man that the clothing represents.

At the beginning of the first Iron Man movie, Tony wasn’t heroic. But now, after 4 movies and 42 suits, he’s heroic even without them.

The Torah is our armor.

“My suit was never a distraction or a hobby,” Tony explains to his unconscious therapist. “It was a cocoon.”

Clothes make the first impression, sure. Iron Man 1 was about the armor, and that’s why we all came to see the movie. But this movie is about the guy underneath, and we’re willing to see it anyway now that we know him. We’ve seen his highs and his lows, and watched him hang out with his colorful friends, such as the guy without a shirt, and the other guy without a shirt.

And he’s had tough experiences with them. At the beginning of the move, we find out that he’s been unable to sleep since the end of Avengers, and has been obsessively building armors for every doomsday scenario he could imagine, which is a lot, since he’s basically fought aliens in a wormhole, almost died, and was rescued by a big green monster, and that monster was one of the good guys. And compared to all that, he wasn’t anything special. He was just a genius billionaire playboy philanthropist. Like the rest of us.

Maybe the Jews in the desert felt that way too, after the spectacle of Passover. Where do you go from that?

For forty years the Jews complained, beginning a tradition that continues to this day. All we wanted to do was crawl back into the uncomfortable cocoon that was Egypt.

In this movie, like the Jews in the desert, Iron Man is taken out of his element and stripped down to just his goatee in the middle of nowhere. But in our case, the desert was our cocoon. God gave us the Torah, kept us away from distractions for a 40-year incubation period, and helped us grow before releasing us back into our homeland. The Torah is our armor. And after wearing that for 40 years, the hope is that we’ve internalized it.

Tony spent time upgrading his suits, but what he didn’t realize was that he needed to upgrade himself. He has to get a few things, um, ironed out. It’s not his metal that matters. It’s his mettle.

We all have within us what it takes to be heroes. We also have an outer shell, but the real question is what we do when it cracks open. Do we just kind of leak out, or are we Iron Man – unflinching in our values, even in the face of danger?

I am Iron Man.

Superman vs. the Nazis: How Comics Influenced American Public Opinion
It Takes A Lot Of Faith To Be An Atheist
How Instagram Brought Back This Nostalgic Soup
What Makes Eli Run?
Comments
MOST POPULAR IN Jewlarious
Our privacy policy