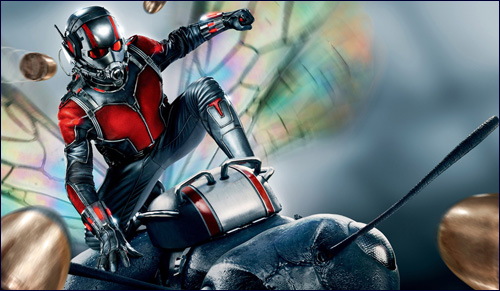 It’s hard to keep track of ants. They’re tiny and they’re everywhere. Like the Jewish people.

Nobody thought Marvel’s Ant-Man would be a good movie. It’s about a superhero who’s smaller than a regular person.

Great. What does he talk to ants ABOUT? I don’t know that they’re scintillating conversationalists.

But somehow, it’s the best movie about shrinkage you’ll see all year. And it’s definitely relatable. It’s about the little guy. The guy one millimeter high.

Strength comes from realizing you’re part of something larger than yourself.

Paul Rudd plays Scott Lang, a cat burglar with a Masters in Electrical Engineering, who gets out of prison and rejoins his crew, which consists of the getaway guy, the guy who sits in the van with the computers, and the hookup guy with a knack for telling stories exactly as they happened. Scott doesn’t want to return to a life of crime, but his ex-wife says that the only way he can see his adorable daughter with the two missing front teeth is if he starts paying child support, which he can only do by returning to a life of crime. What’s he going to do? Lie about his criminal past and get a job at Baskin Robbins? Baskin Robbins always finds out.

But then Scott is recruited by Hank Pym, an elderly recluse with not one but three tragic backstories. It seems that Hank was The Ant-Man – a secret superhero in the 1980s who fought the Russians, like all heroes did back then. But then, tragically:

2. He quit SHIELD after he found out that they were trying to duplicate his technology, and

3. His protégé ousted him from his own company.

So Hank now lives bitterly sulking alone in his huge mansion without even a cleaning staff.

That’s how you get ants.

He also spends years hooking billions of ants up to Bluetooth, so he could command them to, say, mess up a villain’s picnic.

But now it turns out that his protégé, Darren Cross, is close to reinventing the shrinking technology, and we all know that Cross is evil, because he’s a bald guy in a business suit. And if there’s one thing that movies have taught us, it’s that bald guys are evil – Obadiah Stane, Lex Luthor, Voldemort, Elmer Fudd, George Costanza…

Cross has created a new shrinking suit, called the Yellowjacket, and he wants to sell the suit to the highest bidder. Hank is afraid the tech will fall into the wrong hands, so now he needs Scott to put on the Ant-Man suit, which is one-size-fits-all apparently, and, along with the ants, sneak into the building and steal it out of those hands during the villain’s picnic. charity gala. This is assuming it doesn’t occur to the villain that they’re going to use the shrinking suit to sneak in and stop him from mass producing another shrinking suit.

But first Hank and his daughter have to train Scott, and, using his expertise, plan the heist down to its tiny details. Well, it’s basically all tiny details.

But then they run into Cross, and he gets, um, cross, and this leads to a tiny fight scene in which Cross becomes Yellowjacket and Paul Rudd becomes Small Rudd and then Tall Rudd and then Small Rudd again, all the while being pursued by the very cop who is engaged to his ex-wife.

This all culminates in a stellar scene where, to destroy the Yellowjacket suit, Small Rudd shrinks down to the subatomic level, where space and time mean nothing, and he of course finds himself inside his daughter’s bookcase.

But this whole movie seems pretty small, right? At least compared to Marvel’s other movies. It’s not an army of invaders attacking New York, or a city being raised into the sky.In fact, one of the biggest fights of the movie takes place inside a briefcase. But then, they say size doesn’t matter, right?

Well, this movie argues that size DOES matter and sometimes smaller is better. In fact, the most powerful thing these days is microprocessor technology. The smaller the chips, the more powerful they seem to get. The more they can lift. Like ants.

Small doesn’t mean weak, and the movie points this out right away. As Hank’s daughter explains, the Ant-Man retains all of his original mass, so his punches are just as hard, except, since the fist is smaller, it feels like a bullet. Paper can stop rock, but it can’t stop scissors.

And there are other tactical advantages to being small. Firstly, small things are cute. But that’s just a defense mechanism, so we won’t put all our babies up for adoption.

Also, when you have the tech to become tiny, you can move around unseen. No one thinks to even look for you. This is great for surveillance, sabotage, and hiding inside briefcases to assassinate people, and also save on plane tickets. It can also revolutionize the pet industry.

As Yellowjacket frustratedly tells Ant-Man, “You’d be easier to hit if you were bigger!”

It’s hard to keep track of ants. They’re tiny and they’re everywhere. Like the Jewish people.

In the Torah, when Moses sent spies to check out the land of Israel, they encountered giants, and the giants saw them as insects. The spies were terrified. But they had no reason to be. Case in point, ants are still around. Giants, no so much.

There’s also a famous story of a huge colony of ants defeating the giant, Og, as he was fighting Moses.

Smaller is stronger. In fact, at the climax of the movie, when Small Rudd had to defeat Yellowjacket, the answer was to go even smaller. That’s how you defeat the bad guy. When you go smaller, your attention to detail becomes greater and you see things that you didn’t see before.

In fact, I picture the writers of the movie spending days on end lying face down on a shag carpet and trying to picture what it would be like to be an ant.

“What? I’m researching my movie!”

And in fact, our sages suggest we spend some time observing ants. The Talmud says that, from the ant, we’re supposed to learn to avoid theft. Which is ironic, because this is a heist movie. On the other hand, the whole purpose of this theft is to avoid disaster in the future.

Which brings us to the lesson of Solomon in Proverbs: Solomon instructs the lazy reader to observe the ant, and learn about hard work and preparing for the future.

Right now, Ant-Man’s struggle seems like a small-scale fight, but it’s about saving the future. It’s about preparing, like an ant – saving the world now, in small scale, so you don’t have to later, in large scale. The ant reacts now before the problem becomes unmanageable – before it’s the winter and it has no food.

As Hank says to Scott at some point, in reference to their daughters, “It’s not about saving our world. It's about saving theirs.”

An ant spends all summer gathering food for the winter. We all know this. But an ant only lives for 2-6 months. He’s gathering for his kids. Life is bigger than any one ant, and it’s that realization that makes them strong. Maybe strength comes from realizing you’re part of something larger than yourself. And about how ideals travelling through generations is bigger than the people passing them. They make the people stronger, through shared ideals.

A single ant can lift 50 times its own weight. The only human that can do anything approaching that is a parent lifting a vehicle off a child.

I think what Solomon in his infinite wisdom is saying is that you should go watch Ant-Man.

“Observe the ant, O lazy one. During the summer.”

Sidney Poitier and the Jewish Waiter who Taught Him How to Read
Big OnThe Little Things
Chraime Egg Boil
Is Grease the Word?
Comments