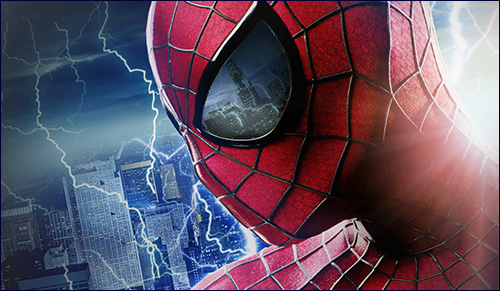 Today’s Spider-lesson: Who is powerful? One who conquers his bad inclination.

There’s a lot of bad parenting in the Spider-Man universe. For every one hero, there are like six villains.

Psychologists are right. It really is all the parents’ fault… Am I raising supervillains?

I mean, obviously Aunt May is a loving parent, as is Uncle Ben, and Peter turns out okay, aside from having the occasional tendency to talk to himself.

Psychologists are right. It really is all the parents’ fault. This is a scary thought, as a parent. Am I raising supervillains? They already don’t listen.

But what happened to Peter’s actual parents? How involved were they? I mean, Uncle Ben and Aunt May probably weren’t his biological parents, right? Did his parents go on vacation and forget to come back? Is shipping yourself off to Europe really better than shipping off your kid?

It’s tough to be a parent. And not just because kids don’t listen. It’s because sometimes, you have to make tough decisions. You have to choose between your kids’ happiness and their well-being. And if you make the right decision, your kids will hate you.

In The Amazing Spider-Man, the first (fourth?) movie, Police Captain Stacy, father of Peter’s girlfriend Gwen, takes the time, while dying, to tell Peter to stay away from his daughter. He says that Gwen will get hurt if she keeps hanging out with Spider-Man.

And he would know. This is a cop in a city where every time Spider-Man fights a villain, magical barricades pop up and people stand behind them, with their kids, cheering on Spider-Man and booing at the villain. Instead of, I don’t know, trying not to antagonize anybody and looking for cover. Talk about absentee parenting.

And Peter struggles with Stacy’s request for the entire movie. He and Gwen want to stay together and continue stuttering at each other. But every time Peter goes near her, the ghost of her dad shows up to give him dirty looks. They know they should break up, but they can’t bear to make it stick. They’re happy.

Are you strong enough to put long-term well-being before immediate happiness? A good parent is strong enough to do this, even when it comes to his own happiness. We see this when Peter finally uncovers the truth behind his parents’ extended vacation, thanks to a bag his father left behind that keeps revealing new secret pockets.

As it turns out, Peter’s father, who was a scientist for the OsCorp Villain Factory, found out what his animal-hybrid experiments were being used for, and decided, in his words, that he had a responsibility -- “a responsibility to protect the world from what I know the company is capable of.”

But this painted a target on his back. So in an attempt to save his son, Dr. Parker abandoned him with relatives and took off. Literally. There was a plane involved.

Peter’s parents left him to keep him safe, and they died. Pete didn’t leave Gwen to keep her safe, and (spoiler from 1973) she died. You can never know what’s going to happen. Maybe the moral of the story is that every Spider-Man movie has a funeral scene. It’s something that comes with the red-and-blue pajamas.

He should think about getting a black one for funerals.

A good parent is strong enough to push long-term goals over immediate gratification.

If a parent wanted to put his kids’ happiness before what’s good for them, he wouldn’t make them go to school. A good parent is strong enough to push long-term goals over immediate gratification. In the Torah, our forefather Jacob was sent away from home by his mother so he wouldn’t get killed by his brother Esau (spoiler alert from 1594 BCE). And to save Moses from the Egyptians before he was old enough to call down plagues, Moses’ mother put him in a tiny ark, alone, without two of every kind of animal.

Peter, through most of this movie, doesn’t have that strength.

Sure, he’s learning. At some point, Harry asks Spider-Man for a blood transfusion to save him from literally turning into his father. And Peter, despite wanting to save his friend, refuses, because the last time he did something like this, the guy turned green and scaly.

But when it comes to Peter’s own happiness, he’s not strong enough to make that sacrifice.

“Do I have to lose you too?” he writes on a picture of Gwen.

A significant theme of the movie seems to be “power”. This is especially highlighted by the main villain, Electro, an electricity-controlling villain who is very, um, power hungry (sorry).

At the beginning of the movie, Electro is Max Dillon, an employee of OsCorp who is so faceless that he has a talent for getting slammed into by passersby on the street, and then again when he’s picking up the stuff he dropped. No one notices him. He has no power. But then one day he gets electrocuted and falls into a tank of genetically-modified electric eels, as one does, and the eels, of course, proceed to bite him. Nobody’s genetically modifying anything that doesn’t bite. No genetically-modified sheep or anything.

And that accident turns Max into a smurf who can control electricity, because science. For example, he has the ability to make car alarms go off by walking past them. I have that ability too, sometimes.

“Soon everyone in the city will know how it feels to live in a world without power,” he says.

I’ve lived in a world without power, after Sandy. It wasn’t fun. I spent the entire week trying to find somewhere to charge my phone.

But, as Electro finds out when Spider-Man shows up, what he has isn’t real power. It’s just a spark that dies down. As soon as Spider-man shows up, everyone’s focus is off Electro and turns to cheering Spider-Man and standing in the way.

In superhero movies, we use the word “power” interchangeably with “superpowers”. If you’re full of powers, you’re powerful. Right?

The villains have powers, but they don’t have power.

The Mishna in Pirkei Avot – Ethics of our Fathers – defines power:

“Who is powerful?” it asks. “One who conquers his inclination.”

It doesn’t say “evil inclination”. Yes, we have to be strong, I guess, to decide not to rob a bank every single day. But many of us don’t anyway.

Dieting is a great example of this that hits really close to home. I don’t want to talk about it. I’d look like Spider-Man if I didn’t love cake. Instead, I look like Rhino.

A strong person isn’t someone who does whatever he wants no matter what anyone thinks. That just makes you stronger than other people. But it’s a comparative thing. Are you strong because you’re stronger than them? Maybe they’re just weak. Are you in shape just because you surround yourself with fat people? Is Spider-Man good because he keeps standing next to villains?

To be really strong, you have to be stronger than yourself.

As does Peter. After all, it’s in his blood.

A Simple Song for Israel
The 21st President of the United States: Failure or Inspiration?
Hiding Their Jewishness
The Jewish Pope: Following the Questions Home
Comments