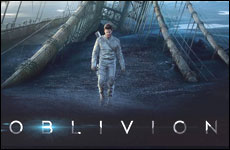 What if all of your memories disappeared? Would you still long for the past?

It might be tough. How many of us miss the “good old days”, the traditions of our grandparents, Jewish holidays we celebrating when we were kids? Or were they just created for an older time, and are now obsolete?

How many of us miss the “good old days”?

Oblivion is the newest mind-bending sci-fi movie, and it’s decent enough entertainment if you want to see Tom Cruise tackle himself, fall down holes, and be surprised by everything.

But critics don’t know why he’s surprised. They’re saying that it seems to be a rip-off of a host of other sci-fi movies.

But I don’t know why they’re saying that. All it is (SPOILERS AHEAD) is a futuristic story about a clone with false memories who finds a stasis pod from the past and has to team up with a wise man in sunglasses and help the rebels defeat the alien robot artificial intelligence who has taken over the earth, all just two weeks before his retirement. Also, the Statue of Liberty’s torch is down.

But Tom Cruise’s character, who, as usual, is named Jack, has had his memory wiped, so he’s never seen a sci-fi movie before. This is all new to him. In fact, that’s basically the first thing he tells the audience – that he’s been mind-wiped – which is a very strange thing to remember.

“I’ve been mind-wiped. But here’s a back story that’s probably not true.”

Jack is the last man on Earth. As the story goes, at some point before the movie – while you were watching the trailers, I guess – aliens attacked the Earth. We won the war, but everything’s destroyed, so now we can’t live there anymore either. All the people are gone, and Jack is left as the one-man clean-up crew. Like Wall-e, but slightly more human. He even has a little flower in a can. The surviving humans, meanwhile, are said to be living out in space, where they – I don’t know – float around in chairs or something. They’ve been exiled from their land, and they keep gaining weight. It’s a very relatable concept.

Jack’s main job is to maintain the drones, which are floating robots whose job it is to hunt down the last few remaining aliens, even though there are no people left on Earth, so who really cares at this point? But it’s the principle of the thing. He lives high above the clouds in a birdhouse with his partner, Victoria, a really nice pool, and a hamster wheel/treadmill thing so he could do some Tom Cruise sprinting every night.

But like Wall-e, Jack has developed a personality. And he’s curious. He starts noticing plot holes (Yes, the movie has so many plot holes that even the main character is noticing them):

“Wait. Why do I keep having dreams of being on Earth before the invasion if I wasn’t even born yet by then? If we won the war, why do we have to leave? When did we develop this enormous space station that probably took years to build? AFTER most of Earth was destroyed?”

Jack has memories of an Earth he isn’t old enough to remember. Even though he can visit whatever’s left, he yearns for what was. He looks at the ruins – at the landmarks crumbling in the dust, and he misses it. He feels a connection to the ruins that he can’t explain. And he feels alone.

Victoria, whose job it is to monitor him from their little “Jetsons” house and never actually sets foot in their homeland, doesn’t yearn for it. He gives her his Wall-e flower, and she throws it off the balcony.

(Flowers have an entirely different meaning in the future.)

“Our job is not to remember,” she says. “Remember?”

Judaism is all about remembering.

But Judaism is all about remembering.

It’s harder to remember what you lost if you never visit – when you can’t reach out and touch things, and when the slightest hint of your people’s past sends you running for the balcony. Jack sees every day what was lost, but Victoria doesn’t. How many people who’ve never been to Israel actually miss it?

Then one day, Jack stumbles across the underground human resistance, who live, well, underground, in the dark, and are narrated by Morgan Freeman. (Morgan Freeman plays “Morpheus”.)

Morpheus then tells Jack the truth – that the drones are actually part of the invading force, and the “remaining aliens” are actually the humans. What once was is gone, and what society says is good used to be thought of as bad. The world is upside down. But the truth was there before the lies. The lies are just piled on top, covering it. The truth is underground.

But here’s how you know the difference: The lies have plot holes. You’re not supposed to ask questions. Judaism on the other hand encourages asking questions, because that’s the only way to bring out the truth. There are no plot holes in Judaism, only questions that we haven’t dug deep enough to find out the answers to yet. And the best way to get those answers is to know who to ask.

But if he’s just a clone, is the earth still his home? In the world he knows, the planet always belonged to the aliens. After all, you’re born into a society that is what it is. Your memories of your traditions are just your parents’ memories. Or are they?

We’ve always had cloning technology, to some extent. After all, what are kids? They’re partial clones of their parents. They share your DNA, your looks, your values, and a lot of your life experiences and memories.

So you could say, “This isn’t my land. These aren’t my traditions. These aren’t my memories. They belong to my parents.” But it’s like cloning in a sci-fi movie: Even though it makes no sense, the clone somehow retains the memories of the original. It’s called “Lamarckism”, and it’s why kids these days know how to use computers right out of the womb, while you’re still typing with two fingers, because if you type with more, they get in the way and you can’t see the keys.

We’ve all been mind-wiped, over time, and have no idea what we’re missing. The world is constantly changing, and with them, so should traditions, right? But Oblivion is about hanging onto your traditions, despite the fact that you don’t really remember them being yours. It’s about longing for a time when it was obvious what was good and what was not. It’s about Morgan Freeman sitting around in the dark, wearing sunglasses.

The future is bright, apparently.

Judaism has always been about passing on traditions.

You know how in the movies, when you get rid of the parent alien, all the others just drop what they’re doing and keel over?

(Yeah, that happens in this movie too.)

But Jews are not like that. Like the resistance in Oblivion, there will always be more of us to carry on -- albeit scattered around the earth. We just can’t forget what we’re missing.

How Kronk Became a Jewish Icon
Why My Iranian Mother Didn’t Want Me to Become a Religious Fanatic
The Jewish History of Prague
Why the Sexual Revolution was Bad for Women
Comments
MOST POPULAR IN Jewlarious
Our privacy policy
Aish.com Is Looking for Great Writers