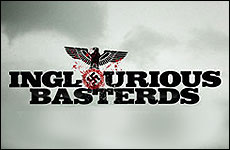 Quentin Tarantino's new movie made me wonder what Jewish "vengeance" should look like.

If you were a Jew in Germany in the 1940s what would you have done? You would have fought back, right? You wouldn't have gone like a sheep to the slaughter. You would have joined the resistance and showed the Nazis that Jewish blood wasn't cheap, right?

Growing up in a family still carrying the scars of the Holocaust, that's what I used to tell myself. My grandfather had been sent over from Poland to America in the 1920s as the eldest of nine siblings to work and earn enough money to send for the rest of brothers and sisters and eventually his parents. He was able to rescue one of his brothers until the doors of Europe were slammed shut. The rest of his family perished and he never forgave himself for it. As children and grandchildren, we all shared a portion of Zadie's guilt, as have the entire Jewish community, and society as a whole.

What would our world look like if there had been no Holocaust? Or what if the Jews could have somehow fought back successfully and changed the course of the war? Sadly, in reality we will never know, but Quentin Tarantino's new movie, Inglourious Basterds, allows us to imagine the possibility.

The film follows a group of Jewish American soldiers called the "Basterds" who set out for revenge against Nazi soldiers with the directive from their Lieutenant "Aldo Rain," played by Brad Pitt, that they are to obtain 100 Nazi scalps each (literally). These Jews also take sport in killing their prey, taking whacks at Nazi skulls with baseball bats and carving swastikas into their foreheads. The film ends with a film premier at a Paris movie theatre owned by a girl named Shoshana, whose entire family had been killed a few years earlier by the Nazis. The subject of the premier is a Nazi propaganda film and in attendance are all of the Nazi top brass including Joseph Goebbels, Hermann Goering, Martin Bormann and Hitler himself. Shoshana, along with the Basterds, lock the doors to the auditorium, light the place on fire, and shoot indiscriminately into the crowd blowing up the place in a Tarantino-esque blood bath.

While only a movie, watching the Basterd named the "Bear Jew" put 100 holes into Hitler with and AK, and his cohorts herd the Nazi brass into a locked room while they violently burn to their deaths is strangely cathartic. Indeed, it is interesting that 65 years after the end of the Holocaust Tarantino's movie marks a recent trend of movies emphasizing Jewish vengeance or heroism (Defiance, Valkyrie, White Rose). But is vengeance really a Jewish attribute?

My 19-year-old self would have said yes. After having heard my Zadie's tragic stories, and the many others we heard in school, in my way, I wanted vengeance. One way I thought I could do my part was to join the Israel Defence Forces. I went to Israel to study for a year at the Hebrew University of Jerusalem and I figured that at the end of my studies I would think about enlisting.

The more I learned about Judaism and Jewish practice, the more I realized that this was the type of "vengeance" I wanted.

But soon after I arrived in Israel, I began to study not only at the university, but at the Yeshiva as well. I was exposed to Jewish wisdom and practice that I had never known really existed. I saw close knit families that not only stayed within the Jewish fold but made Judaism a part of their lives. This was in stark contrast to the community in which I grew up where intermarriage and Jewish apathy were rampant. The more I learned about Judaism and Jewish practice, the more I realized that this was the type of "vengeance" I wanted. Being a proud, informed Jew, immersed in the meaning and relevance of Judaism.

After my return from Israel, I informed my Bubbie and Zadie that I had become observant. While they did show some initial apprehension, slowly they began to realize that the more "Jewish" I became, the more connected I became to my history, my people, and them.

As the years have progressed I have gotten married and had children. While my Zadie has since passed away at 97 years old, my grandmother is alive and well (may she live until 120!) Recently, my wife and children and I went to visit my Bubbie where she lives in a Jewish senior's home. Interestingly, my wife and I got in "trouble" from the activities director as none of the residents showed up for baking class. Apparently, they all simply wanted to sit in the lobby and watch our children run around. As my Bubbie sat there next to her cousin whose entire family was wiped out in the Holocaust, along with a few dozen other residents who no doubt suffered tragic losses as well, I realized that this was the best "vengeance" someone could ever have. Who knows -- maybe my family will be the subject of Tarantino's next film.

Avatar: Bad Guys and Good Guys
Blessing on Chewing Gum
Was Rahab a Prostitute?
Extras In Our Own Epic
Comments
MOST POPULAR IN Jewlarious
Our privacy policy