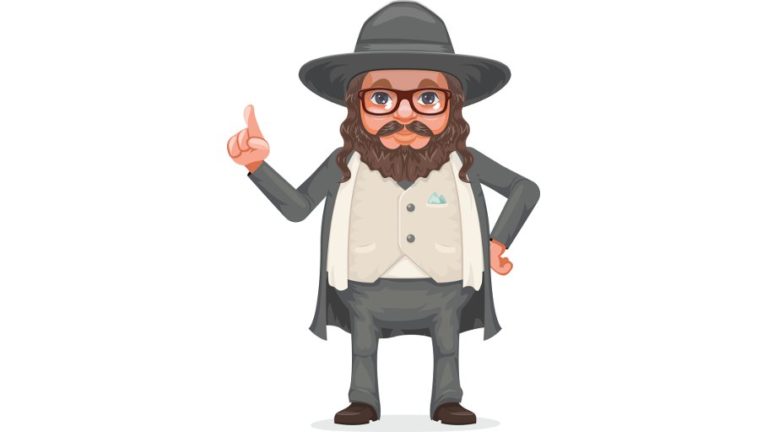 A rabbi walks into a bar…

Rabbis teach us. They inspire us. They lead us. So what better way to say thank you than to tell jokes about them. That’s just what Jews do. So without further ado, here are 10 of our favorite jokes about Rabbis.

A Rabbi and his wife were cleaning up the house. The Rabbi came across a box he didn't recognize. His wife told him to leave it alone, it was personal.

One day she was out and his curiosity got the best of him. He opened the box, and inside he found three eggs and $2000. When his wife came home, he admitted that he opened the box, and he asked her to explain the contents to him. She told him that every time he had a bad sermon, she would put an egg in the box...

He interrupted, "In 20 years, only three bad sermons? That's not bad."

His wife continued... "and every time I got a dozen eggs, I would sell them for $1."

2. The Rabbi and the Frog

A Rabbi walks into a bar. He has a long, long grey beard, he's wearing tzitzis, the whole package. And he has a frog on his shoulder.

The bartender asks, "Where did you get that?!"

The frog answers, "Brooklyn, there are lots of them there."

3. A Deal with the Rabbi

Issy and Howard were brothers disliked by the entire community. They ran a crooked business, they lied, and they cheated the poor. But they were also very, very wealthy.

When Issy died, Howard went to Rabbi Bloom and said, "I will donate one million dollars to the synagogue if at the funeral you say that my brother Issy was a mensch."

The Rabbi thought long and hard but eventually agreed.

>When it came time for the funeral, the Rabbi recounted Issy's wrong doings during his eulogy at length. He then closed with the sentence "But, compared to his brother, he was a mensch!"

Rabbi Epstein was a particularly tenacious clergyman and couldn't stand seeing Jewish people getting drunk. So one day he went into a particular tavern frequented by Jewish patrons.

Rabbi Epstein walks into the pub and sees Stan from shul. "Stan, do you want to go to heaven?" The man said, "I do Rabbi."

The Rabbi said, "Then stand over there against the wall."

Then Rabbi Epstein asked another man he recognized, "Do you want to got to heaven?"

"Certainly, Rabbi," was the man's reply.

"Then stand over there against the wall," said the Rabbi. Then Rabbi Epstein walked up to Chaim Yankel Rabbinowitz and said, "Do you want to go to heaven?"

The Rabbi was in disbelief, "You mean to tell me that when you die you don't want to go to heaven?"

Chaim Yankel said, "Oh, when I die, yes. I thought you were getting a group together to go right now."

Rabbis Bloom, Levy, Goldstein and Morris regularly have theological arguments, and whenever they do, three of them are nearly always in accord against the fourth rabbi. Today, the odd rabbi out is Rabbi Goldstein. But this time, Rabbi Goldstein decides to appeal to a Higher Authority.

"Hashem," he cries out, "I know in my heart that I was right and my colleagues were wrong! I would therefore be most grateful if you could give us a sign to prove to my colleagues that they were wrong."

Although it is a beautiful warm sunny day, as soon as Rabbi Goldstein finishes his prayer, a storm cloud moves across the sky above the four rabbis, rumbles once and then dissolves.

"Aha," says Rabbi Goldstein, "that was a sign from Hashem. I knew I was right."

But the other three rabbis disagree, pointing out that it isn’t unusual for storm clouds to form on hot days.

So Rabbi Goldstein prays again. "Hashem," he cries out, "I need a bigger sign to show my colleagues that I was right and they were wrong. Please God, please give us a bigger sign."

This time five storm clouds suddenly appear above them and rush towards each other to form one big cloud. Then a lightning bolt slams into a nearby field.

"See," says Rabbi Goldstein to his colleagues, "I told you I was right."

But the other 3 rabbis continue to insist that nothing had happened that couldn't be explained by natural causes.

Then, just as Rabbi Goldstein is getting ready to ask God for a gigantic sign to end the other three rabbis' disagreement, the sky turns pitch black, the earth starts to shake vigorously, and a deep, booming voice says, "He’s right!"

Rabbi Goldstein smiles, turns to the other three rabbis, and says to them, "So nu, my argument was correct was it not?"

Rabbi Sapperstein, fresh out of rabbinical school, had to officiate his first funeral for a homeless man with no friends or family. The funeral was to be held at a new cemetery across town and this man was the first to be laid to rest there.

Rabbi Sapperstein arrived late, but noticed a few workers gathering around the grave opening. Young and enthusiastic Rabbi Sapperstein poured out his heart and soul as he gave his sermon and recited the prayers. He was so powerful that he brought the cemetery workers to tears.

When the service was over, the rabbi walked to his car and as he opened the door he heard one worker say to the other, “I never saw anything like that before and I've been putting in septic systems for over 20 years."

7. Did you hear the one about the Rabbi?

>The mothers are gathered and showing their nachas. One boasts of her son, the head of a medical department; the other has a son, a judge, and a daughter, psychiatrist. One of the women is quiet through it all. Finally, they turn to her and ask: "Well, what does your son do?"

"A rabbi? What kind of a profession is that for a nice Jewish boy?"

8. My Father the Rabbi

Three young boys were walking on the sidewalk arguing over whose Daddy was the greatest.

David said, "My Dad is the greatest because he is rich stock broker on Wall Street."

Michael said, "That’s nothing. My Daddy is a politician and he says he’s the most powerful man around."

Moishie said, "That's nothing, my Dad is a rabbi, and he owns hell.”

“How can you own hell?” asked the other boys.

“Well my Dad came home last night and told my mom that the Shul Board gave it to him!"

9. Pulling it out of the Rabbi’s Hat

On a very windy day, a rabbi was walking along when a strong gust of wind blew his hat off his head. The rabbi ran after the hat, but the wind was too strong. It kept blowing his hat farther and farther away.

A non-Jewish young man, seeing what had happened, ran after the hat, caught it and gave it back to the rabbi. The rabbi was so grateful that he gave the young man 20 dollars and blessed him.

The young man was so excited that he decided to go the race track and with the rabbi's blessing, he decided to check the program and place the entire 20 dollars on a horse. After the races he went home and recounted his very exciting day to his father.

"I arrived at the fifth race and looked at the program. I saw this horse named 'Top Hat' was running. The odds on this horse were 100 to 1 but since I received the rabbi's blessing I bet the entire 20 dollars on 'Top Hat' and guess what? He won!"

"So did you bring the money home?" asked his father.

"No," said the son, "I lost it all on the last race. There was a horse named 'Chateau' that was a heavy favorite so I bet everything on him, and since 'Chateau' means 'hat' in French I figured he was a sure thing."

"You fool!" said the father. "Hat in French is 'chapeau' not 'chateau!'" Exasperated, his father then asked, "So who won the race?"

10. Rabbi Epstein is a Joke

Rabbi Epstein, who shall we say was "humor impaired," attended a conference to help him improve his public speaking skills. Among the speakers were many well known and dynamic speakers.

One such speaker boldly approached the podium and, gathering the entire crowd's attention, said, "The best years of my life were spent in the arms of a woman that wasn't my wife!" The crowd was shocked! He followed up by saying, "And that woman was my mother!" - The crowd burst into laughter and delivered the rest of his talk, which went over quite well.

The next week, the rabbi decided he'd give this humor thing a try, and use that joke in his sermon. As he surely approached the bimah that shabbat, he tried to rehearse the joke in his head. It suddenly seemed a bit foggy to him.

Getting to bimah he said loudly, "The greatest years of my life were spent in the arms of another woman that was not my wife!" The congregation inhaled half the air in the room. After standing there for almost 10 seconds in the stunned silence, trying to recall the second half of the joke, Rabbi Epstein finally blurted out, "...and I can't remember who she was!"

The Real Reasons World Leaders Are Upset about Netanyahu’s Victory

Ahmadinejad: Iran Doesn't Have Tyrannical Dictators
The Promise Of The Land
Which Chat Are You On?: Parshas Behar/Lag Ba’Omer
Do You Like Slow-Cooked Food? Thank the Jews
Comments
MOST POPULAR IN Funny Stuff
Our privacy policy