Dating Tips from the Jewlarious Rebbetzin 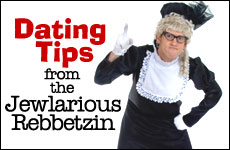 When my friend Lisa dropped by to report on her blind date, clutching a bottle of antacids and sporting a brand-new twitch in her eye, I sensed that it hadn't gone well. When I asked what happened, she said, "He sounded so normal on the phone, but even though he had bragged about his successful business, when the waiter asked for our order, he said, 'Get whatever you like. I've got a coupon.' He also mentioned his ex-wife, the Brazilian one with the anger-management problem, a bunch of times, and kept darting his head around, as if he thought she might show up in the restaurant."

I clucked sympathetically. "There are good men out there," I tried to assure her.

"Sure there are. They're all married to my friends," Lisa said.

Unfortunately, Lisa has a lot of company, and not just among women. For years, my friend Ed had sought a life partner who was kind, compatible, didn't mind his modest earning power, and didn't require more than 50 pair of shoes. It took years before he found his match.

Having talked a lot of singles down from their doldrums, and having been happily married for 22 years and thereby dubbing myself a relationship expert, I hereby share some general advice that I hope will lead to greater understanding between men and women, and more happy marriages, too. Here's to successful bashert-hunting!

On Commitment: The commitment gene (known by its biomarker "IDO") was one of the last to be introduced into the male of the species. Even God Himself had trouble making this one stick, and rejection of this gene in the host body has been an ongoing problem. Many women don't understand this phobia, but it's an annoying reality, much like static cling in the laundry and spam email.

Railing against this is futile. Women are better off by limiting how many months they will date before securing a ring and a hall. After two months of dating, a guy should be asking questions deeper than whether you could see yourself ever rooting for the Red Sox. At six months, he should be transfixed less on whether its time for the tires to be rotated and more about how you figure in his long-term plans. As painful as it is for women to broach the "C" topic, they simply must if things are not getting serious. Look, if the shmegeggie runs, at least you'll not have wasted more than two seasons on the prospect! On Sports: Sports can be very important to a guy. So can beer. Sports and beer together can be very, very important. Try to be understanding, and remember, you don't have to like either one to get married. I nearly lost my husband to another girl when I said I thought beer made an excellent shampoo. Eventually, he married me anyway. On Communication: Like commitment, many men need help in communicating their feelings, and even locating them on a Google Earth map. Tread carefully in this tricky territory. It's best to remember that most men don't like to be asked too many questions about their feelings, since, as you've noticed, there are hardly any guys in the audience of the Dr. Phil show. On the other hand, a common complaint about men is that they are lousy listeners, is sometimes true. If a guy has talked for an hour and still hasn't said, "But enough about me. . . , let's hear about you!" move on.

On Commitment: Men, understand that most women have been wired for marriage from the moment they were born. When you were playing cops and robbers at 6, your girlfriend was playing wedding dress-up, tottering on her mother's high-heeled shoes and collecting plastic rings from cheap toy dispensers till she would eventually score something bling-worthy. If you need bucking up in this area, remind yourself that married men live longer, are healthier physically and emotionally, and far less likely to live alone in the words with a shotgun, scribbling notes about conspiracy theories, than single guys. Still not convinced? They out-earn single men, too.

Jewish women are capable of multi-tasking, shopping for sets of meat and dairy China at the same time.

Smart women will not date you forever. They are multi-taskers, and are capable of dating and shopping for sets of meat and dairy China and flatware at the same time. They are eager to establish traditional Jewish home with Shabbat dinners, cute children, and matching furniture. This all follows in the great Jewish tradition, and it really is a good thing, I promise!

On Shopping: Shopping is to women what sports is to men, except for women, shopping is rarely a spectator sport. While you should avoid dating women whose only magazine subscription is to InStyle magazine and who can spend upwards of two hours in a shoe store that extends for a full city block and still "not find anything," you will have to make peace with women's excitement over things such as matching colors, requirements to change outfits suddenly and for reasons only known to them, and to "need" new purses every season. If this is as bad as it gets, consider yourself fortunate.

On Communication: Women thrive on communicating their feelings and will be eager to share them with you in the process of building your relationship. You may find this boring or confusing at first, but you will get used to it. Don't try to solve a woman's problems when she shares her feelings with you. While you think you are doing her a favor by offering to solve her problem, you will only annoy her and make her think she needs to go shopping for a new purse. As your relationship grows, you will learn to reach a happy medium between talking, listening, and watching the NBA playoffs.

I am confident (since, as a Jewish mother, I am always confident) that my advice will lead to greater harmony between those who inhabit Mars and those who inhabit Venus. You know, maybe if I had gotten that TV show instead of Dr. Phil, I could have gotten many more couples to live happily ever after on the same planet – Jewpiter!

Are Jewish Stereotypes Funny? Part 2
The Connection between Israel and the Jewish People
Grit and Torah
Why We Can’t See True Reality
Comments
MOST POPULAR IN Funny Stuff
Our privacy policy