Musings of a Male Shopper 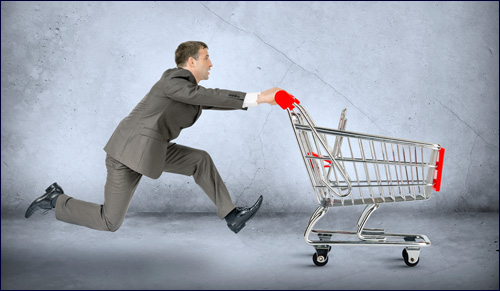 I’m not sure how I ended up being the one who does the food shopping. I can’t remember if it was because I saw the bill one time and thought I’d better get involved, or if it was because otherwise I’d have to babysit while my wife goes out. Either way, I’m the shopper in the house. I actually remember the first time I went out to do the shopping. I was a little nervous I’d be the only man in the store. Boy was I off – grocery stores are full of men – very, very bewildered looking men. Welcome to the world of men’s food shopping.

If we went without a list we’d probably come back with barbeque sauce and beer.

Now, the major problem with men doing the food shopping is that we have no idea what we need to restock on. If we went without a list we’d probably come back with barbeque sauce and beer. (The two things you can never have enough of.) So of course our wonderful wives write up lists – so the children won’t have to drink beer. The problem with this though, is that the list is not a foolproof plan. First of all, you need to decipher what is actually written down on the list, since it’s usually been written with a crayon on the back of an old mitzvah note. (You know the mitzvah note, it’s that thing your kid’s teacher wants you to fill out every Sunday morning telling him how well he behaved over Shabbat…. And apparently “he didn’t kill anything” is not an acceptable comment.) ]

And even after it’s deciphered, a lot of times we men just have no idea what the product is. Quinoa? Seriously? Which section could that possibly be in? I’ve walked up and down the fruit and vegetable aisle five times! That is why men usually spend most of their time at the store on their cellphones asking their wives questions. Really, take a look around next time you’re shopping – there will probably be at least ten men around you on their cellphones at any given moment. What did men do before cellphones? Were there a whole row of telephone booths outside the supermarket? I’m surprised families didn’t go hungry because of husbands coming home empty handed from the store. “Sorry, couldn’t find quinoa anywhere.”

Another very serious issue is the vagueness of the list. “Shampoo and conditioner”. Does she know how many different brands of shampoo and conditioner there are? I stand there for about ten minutes opening every single bottle, smelling it and trying to decide which one smells nice enough for her, but won’t be too womanly smelling for me so the guys at work won’t pick on me. Also, my sage advice to any new male shoppers: do not try buying one bottle which is “2 in 1” shampoo with conditioner. That’s a big no-no. Apparently the conditioner nullifies the capabilities of the shampoo if they are mixed together.

I am pretty good at picking good produce though. Check the apples for worm holes, make sure the peaches are soft yet firm. The only thing I have no idea what I’m doing with is the watermelon. I just do what everyone else does, which is basically hold it up to my ear and smack it. I’m not sure what I’m waiting for exactly. Maybe for the watermelon to whisper to me if he’s juicy or not? He’s probably not gonna tell me if I keep on smacking him.

Now, I finally have all my stuff in the cart and it’s time to make one of the most important decisions of my entire life. Which line to wait on. Now, it’s important to take into account all the variables that will help you come to your decision. How many people are in the line, how many items are in each cart, does the cashier seem to be efficient or just playing on her cellphone, is the person waiting to pay over a hundred years old? The problem is it usually takes me so long to decide, that I could have gotten out of the store three times by the time I get in line.

And you know which person really drives me crazy? That guy who’s not ready to pay at the end. It’s as if he just got the biggest surprise of his life.

And then he starts searching for his credit card as if he had no idea this was going to happen. “What, I actually have to pay for these groceries?”

Yes, and you had ten minutes to find your credit card while they were checking your stuff through!

But by far the worst is when the person takes out a checkbook to write a check to the cashier. Seriously, a check? They still have those?

Well, I might be standing here in line waiting for the guy to find his credit card or write that check and hating myself for not choosing the line next to me which has been flying, but at least I had time to think of an article.

Thinness: We’re Just Not That Into You

Are Jewish Stereotypes Funny? Part 2
Why Are The Prayers Of Yom Kipur So Repetetive?
Ha'azinu 5783: A Time for Unity!
Twisted Thinking
Comments