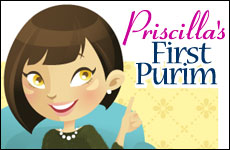 Priscilla writes to her friend Vivian about experiencing her first ever Purim.

You know how much I treasure our correspondence and as always, I find it most therapeutic for me to be able to put into writing my thoughts and experiences, knowing that you, very dearest friend, will be reading these words. Of course I would never discuss the intricacies of my personal life with just anyone, but you have always been like a sister to me and although you are miles away, these letters remind me constantly of your presence in my life.

Well this time, darling, I have the most astonishing news to share with you! This will indeed surprise you since you are privy to every “high” and “low” that my marriage to Roger has endured and have advised me on countless occasions as to how to handle the various “situations” that have arisen. Well, this month’s challenge presented itself in the form of religion.

Have I ever told you that Roger is Jewish? The fact that Mother allowed me to marry him is nothing short of a miracle. You know that Mother is not generally a big fan of religion (she thinks if there is a God, and He is responsible for under-eye bags and wrinkles, then she wants nothing to do with Him) but she likes Jews because she says Martin Luther King was Jewish and he invented the telephone so clearly Jews can be trusted.

Martin Luther King was Jewish and he invented the telephone so clearly Jews can be trusted.

Now, Roger’s family is very religious. They host the Boca- Raton Yom Kippur party every year and every Passover everyone gets together and goes out to eat at that Kosher Italian restaurant that was raved about in the New York Times Magazine and they even wash their hands for the garlic bread. And while they are upstanding members of Temple Shalom, they are not fanatical like his Aunt Dena and her kids who wear long sleeves in the summer and don’t watch TV on Saturday.

Even though Aunt Dena is a bit odd, (she wears a wig even though her hair hasn’t fallen out and always checks her eggs before she cooks because she is afraid that they are bleeding) we still keep in touch because at then of the day, she is family and family is important to us. Well, Aunt Dena called us a few weeks back and invited us to her home at the end of March for this holiday called Purim. Roger said it would be rude to refuse to go.

But I was very concerned about Muffy. My poor darling puppy! You know I love that little ball of fur as though she were my own daughter! She has been so aggravated ever since the vet put her on a low carb diet and has been in such poor spirits. I would feel awful to have to leave her at home but she has a conflicting appointment at the spa to have her fur trimmed and wouldn’t be able to travel with us. Also, they don’t allow pets in first class on Regional Airlines and I will not have Muffy sitting on those stuffy coach seats!

Also, Mother begged me not to go because she just had an eyebrow lift and for some reason the muscles froze on her upper eyelids and she can’t close her eyes. She hasn’t slept in 4 days and says that if I could leave my own mother in this condition then she thinks that if, in fact, there is a God He will strike me with lightning for abandoning her. My therapist says that if I continue to let mother dominate my life, then my marriage will fall apart.

So we agreed to go. Oh, Priscilla, what a very difficult decision it was! We arrived at Aunt Dena’s on Purim eve and were greeted at the door by her kids who were all dressed up like they were going to be in a parade or something. Apparently, part of Purim is getting all dressed up but instead of going trick or treating, they all go to the synagogue and listen to the Rabbi sing a story in Hebrew and the kids get really bored in the middle and make lots of crazy noises. That poor Rabbi! Why don’t these Jews tell their children to be quiet when the Rabbi chants?

Well, it gets worse. We came home for a delicious meal but throughout the dinner, I noticed Uncle David having a bit too much to drink. I know it’s a holiday and everything but this wasn’t the usual celebratory drink, it would’ve been easier to give the man a bottle of wine with a straw and just eliminate the need for glasses altogether! He must do this often, because Aunt Dena didn’t seem the least bit perturbed.

It turns out that there is a huge problem with alcoholism in the Jewish community, as all the family friends who came to visit seemed noticeably intoxicated. I suppose all that separate meat and dairy stuff and praying is finally starting to get to them. Fortunately, the majority of the people who stopped by were happy drunks, unlike Mother’s third husband who used to throw things and call people names when he drank too much. These people danced about merrily and sang a lot. In fact, Uncle David, it soon became apparent, is a very generous drunk and began handing out money to everyone in sight. Roger says that he must be doing very well financially.

The next day was quite lovely, with all the neighbors bringing over hostess baskets for us. What thoughtful people! Aunt Dena must have told them we were coming from out of town and they were so welcoming with their beautiful, colorful gift baskets. Judging by the number of packages that we received, I assume they must not get a lot of visitors around here.

Throughout the festivities, I so wished Muffy was here. This would have been such a positive Jewish experience for her. I have always really wanted her to connect with her spiritual roots. The Rabbi at Temple Shalom told me that Muffy is definitely Jewish because she belonged to Roger’s mother before we got her and Jewish lineage runs through the mother’s side.

When I told Aunt Dena that perhaps we would come for Passover this year with Muffy, her whole face began twitching nervously and I realized that she must be so very enthralled with prospect that she was positively losing muscle tone in her great excitement. I turns out on Passover, you only drink four cups of wine at the meal so it’s not quite as much of a party, but I’ll tell Roger to bring lots of cash with him to the meal just in case.

All in all, it was a most lovely trip with the exception of the fact that Roger gets mortifyingly odd when he is drunk and ran around in circles all day, shouting, “I want more Purim!” I’m not saying that these Jewish holidays make a lot of sense to me, but I think that maybe, just maybe, Martin Luther King was onto something after all.