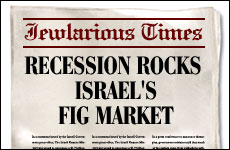 A few weeks after the intense Tu B'shvat shopping period, economists are shaking their heads at yet another sign of a global economic meltdown – families are cutting back on so-called "luxury fruit" purchases, including figs, dates and pomegranates. Noted Economist Ed Yardeni tells Jewlarious, "Last Tu Bishvat a family of four might have eaten a dozen pomegranates and washed that back with a bag of dates. Who knows, they might have even eaten an etrog? This year, the data shows that that same family bought four individual grapes and a prune. Times have changed."

Families are cutting back on "luxury fruit" purchases, including figs, dates and pomegranates.

With the economic slowdown, the price of figs has fallen from an all time high on the London Stock Exchange's overnight fig futures market, from $40 per pound in September to $10 per pound today. Still, even with the decline, many families are staying away. Mother of four, Shelia Berkowitz, told Jewlarious, "I got caught up in the hysteria and bought $160 worth of figs a few months ago. Now, they are worth $40 bucks. Yehuda barely eats his lunch as is – he needs a single fifty cent fig like he needs a hole in the head. Do you think I am buying more?"

Meanwhile, due to poor planning, fig farmers are stuck with tons of un-purchased inventory, produced when the market was at a high, but unmovable now at a low. Fig farmer Gideon Bar Nachman told jewlarious, "We can't make a dime at anything less than five dollars a pound and now these cheap almond producers have dumped their supply on the market. What's a fig farmer to do?" Despite Mr. Bar Nachman's rhetoric, fig, date and carob farmers are taking action, They are joining together – with the Almond lobby noticeably absent – to demand their share of funds through the Troubled Asset Relief Program (TARP) by the American government. Co-spokesperson Itzik Rosenberg stated, "We don't want or need all $809 billion, but maybe $30 billion? We have been giving Americans our luxury fruits for years. It's time for them to give something back to us."

Puttin' on the Shmutz
Saadiah Gaon, Rashi and Maimonides: How Three Rabbis Revolutionized Judaism
King Sennacherib and the Siege of Lachish
Three Small and Easy Changes to Add Positivity in Your Home
Comments
MOST POPULAR IN Jewlarious
Our privacy policy
Aish.com Is Looking for Great Writers