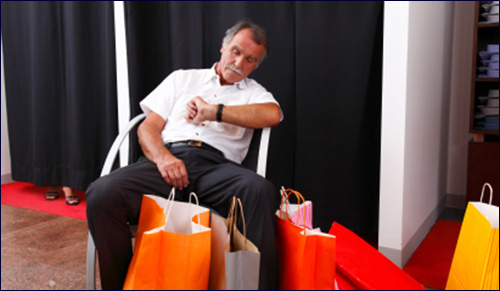 I’ve never liked shopping for clothing. As a kid, every shopping excursion involved me trying to keep up with my parents, whom I couldn’t see because I was shorter than the racks, so I just had to keep zig-zagging around, with sleeves and price tags continuously slapping me in the face.

Men never have “nothing to wear”. We wear a pair of pants until they dissolve.

Not much has changed since then. My parents don’t take me shopping anymore, but my wife does, and I basically find myself dragging my feet behind her, sleeves and price tags still hitting me in the face. (“Are we done yet? I wanna go hoooooooooooooome!”)

My wife dragged me to the store today, because we’re going to the wedding of my cousin Temimah, who’s getting married in Brooklyn, although that’s totally not her fault. Her family lives in Brooklyn. Naturally, my wife needed something to wear.

Here’s what I don’t understand: In my closet, I have two suits, a rack of ties of which I wear about three on a rotating basis, exactly eight shirts, plus two others that require cufflinks that I can’t find, my second pair of pants, and a bathrobe that I wear less frequently than I wear my second pair of pants. The rest of the closet, which goes along the entire length of the room, belongs to my wife.

Yet whenever we have to go somewhere, she says she has nothing to wear. Whereas I have two suits, and I only ever wear the same one.

Men never have “nothing to wear”. They find a pair of pants that they like, and they wear it until it dissolves. Then they go right back to the store where they got the first pair and buy that same exact pair again, most likely in a bigger size.

But not only does my wife go from store to store, she has to drag me as well, because she wants my opinion, which is all of a sudden going to be right for once. And she does try to include me in the process. We walk into the store, and she says, “Okay, try to help me find something that goes with a black skirt.” So I look around and realize that I have no idea what I’m looking for, because EVERYTHING looks like it goes with a black skirt.

So I say, “Here. Does this go with a black skirt?”

“I already have that one.”

So my wife, on her own, found a couple of shirts and went into the dressing room, and I had to stand outside with the big group of husbands sitting outside the women’s dressing room trying not to look creepy.

And every few minutes, my wife came out and said, “How about this?”

“This isn’t the one you were wearing before?”

I don’t make her do that. In fact, when I’m buying pants, I only really try on one or two pairs, just to see what size I am. Once I know that I’m, say, a 42 waist, I just go around the store looking for labels that say “42”, and I trust them. Why would they lie? What could they have to gain by making me buy a 36?

And in fact, the stores know that men don’t try things on as much. That’s why all the shirts already have pins in them.

But according to my wife, women’s clothes are not like that. One company’s size 10 is not the same as another company’s size 10. But then why bother having sizes at all? And what do those numbers even mean? There’s 2, 4, 6, 8, etc., and those numbers aren’t 2 anythings or 4 anythings. And what on Earth is a zero? If I call my brother and say, “I’m in the store right now, and there’s a sale on pants. What size are you?” and he says, “I’m a zero,” then I would say, “Ok, I won’t buy you pants.”

Women don’t want to be reassured; they want a real answer.

But my wife wants to know which shirt is better, and I need to answer her. When I first got married, I thought that the best answer would be, “They’re both great. What do you think?” But it turns out women don’t want to be reassured; they want a real answer. So you have to actually pick one. And if you’re wrong, you’ll be wrong, but you won’t be in any more trouble than if you say that they all look okay. They want you to gamble.

You also have to realize that if you give a definitive answer, you actually have a chance of getting out of the store quicker. So what I do is I always like the first outfit better. Chances are she likes it better too, because it was the first one she was willing to try on. You definitely don’t want to say, “You know what? I don’t like any of them. How about we look around for more clothes?” But you have to be careful that your wife doesn’t catch on that you’re just trying to leave. You have to pretend that you don’t want to leave, which is really difficult, because the truth is that you want to leave.

For some reason, women do not understand how men could not care less about clothing. Men don’t ever mention each other’s suits, unless they’re in certain tax brackets. Most of the time we don’t say anything, because we don’t want to bring attention to our own suits, because we’re happy we’re still fitting into them at all. At most, we will mention each other’s ties, and only if it’s like a Chanukah tie or something. But even that is a two-second discussion. We don’t want to know where the other person got it, or how many ties he had to try on before he found one that fit.

Okay, I’m going to go; my wife is out of the dressing room. It turns out we’re going to buy both outfits, so she can try them on for her friend. So I’m glad I came along. I hope she does this quickly, though, because it’s almost time to go to the wedding. I hope that guy knows what he’s getting into.

How the Wise Men of Chelm Dealt with Anti-Semitism

The Ten Commandments of Jewish Worry: Part 1
What Makes Eli Run?
The Tyranny of Materialism
Science Enters the Mysterious Inner World of Consciousness
Comments
MOST POPULAR IN Jewlarious
Our privacy policy