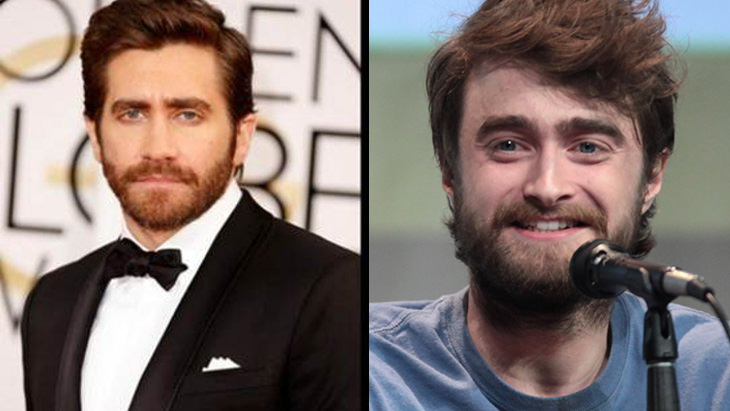 Daniel Radcliffe, Rashida Jones and Scarlett Johansson are all members of the tribe.

According to a recent survey, three of the most mind-blowing experiences in life are:

While I can’t help you out with the first two, I have done some research on the third. As it turns out, there is a multitude of Jewish celebrities out there who don’t exactly present themselves as obviously Jewish. For example, most folks probably know that Barbra Streisand is Jewish. Elliot Gould is Jewish. Gilda Radner and Gene Wilder were Jewish. Adam Sandler and Jackie Mason are Jewish.

Today, however, we deal with celebrities whom you either didn’t think were Jewish, or were not sure. And yet all of the following were born to Jewish mothers, which is the determining factor to whether or not one is officially a Member of the Tribe. So, should you run into them in the future, you’ll have something else to discuss besides how wonderful they are in their chosen fields. The Chosen People in their chosen fields. Check them out…

Who knew when you watched the movie, “Harry Potter and the Chamber of Secrets”, that one of the secrets is that Harry himself, portrayed by Daniel Radcliffe, is a Member of the Tribe? Radcliffe’s mother, Marcia Jeannine Jacobson, who was born in South Africa, is Jewish and his ancestors were all Jewish immigrants from Russia and Poland. If they make another sequel, might I suggest Radcliffe taking advantage of his heritage with something along these lines: “Heshie Potawitz and the Magical Mezuzah”?

The famous American Idol judge and triple threat has completely Jewish roots. Her father is a Syrian Jew, and her mother is a Canadian Jew. Paula still identifies with her Jewish roots and is very proud of them. In fact, during a 2013 10-day trip to Israel, there were many highlights, ranging from a personal meeting with Israeli President Shimon Peres to emotion-charged moments at the Kotel and Yad Vashem. Perhaps the most special, though, was when Abdul fulfilled a long-held dream to celebrate a belated bat mitzvah with a ceremony at the International Centre for Kabbalah, in Tzfat, in northern Israel. At that moment, judge Abdul gave Israel a Yes and became an Israeli idol.

The “That 70’s Show” and “Black Swan” star, who is married to Ashton Kutcher, was born Milena Markovna Kunis to a Jewish family in Ukraine. Kunis has said that most of her family was killed in the Holocaust and that she had to hide that she was Jewish in Ukraine out of fear of persecution. She moved to America in 1991 at the age of seven. In terms of Jewish tradition, Kunis revealed during an Armchair Expert podcast interview last year, “What I grew up with was tradition and I think tradition is beautiful. I don’t think it needs to be based on a book. I think tradition is what you make it. But to that point, I also think the stories in the book [or] books, however you look at it, are really beautiful moral stories.”

Jones is best known for her role in NBC’s “Parks and Recreation.” The actress is half African American and half Jewish by birth. She was raised as a Reform Jew and attended Hebrew school. Jones is the daughter of music mogul Quincy Jones, and an Ashkenazi Jewish mother, Peggy Lipton, who starred in “The Mod Squad”. Growing up, she attended a Hebrew school and was raised as a reform Jew, though she did not have a bat mitzvah. She told American Jewish Life Magazine that Judaism still informs her spiritual life. “In this day and age, you can choose how you practice and what is your relationship with God. I feel pretty strongly about my connection, definitely through the Jewish traditions and the things that I learned dating the guy that I dated. My boyfriends tend to be Jewish and also be practicing.”

Pink, born Alecia Beth Moore, is a singer, songwriter, and dancer with R&B and pop influence. With a Jewish mom, her religion has been in evidence in the wake of everything going on around the world, and she even wants her kids to learn about it. While visiting the Holocaust memorial in Berlin with her 6-year old daughter, Willow, the girl slowly spoke her thoughts: “My mom’s Jewish … then I’m Jewish … Well, then this could have been us.” When Pink was struck by the parallels of performing in Berlin while the Charlottesville march was occurring, she observed: “It’s incredible to watch neo-nazis march in 2017, while I, a Jewish woman, headline a show in Berlin… Hate will not win if we don’t let it. It’s up to each of us to choose love and acceptance.”

Jake is an American actor who is best known for his roles in October Sky, Donnie Darko, The Good Girl, Brokeback Mountain and Love and Other Drugs. Born to a Jewish family in New York City, he considers himself Jewish. Jake’s mother, screenwriter Naomi Foner Gyllenhaal, is Jewish and her credits include the scripts for Running on Empty and Losing Isaiah. She said that she was raised with only a little formal exposure to Judaism and that, in effect, social liberalism substituted for religion in her household. She added that this is the way she raised Jake and his sister, actress Maggie Gyllenhaal.

The movie star’s surname name comes from her father's Danish side, but her mother, Melanie Sloan, is of Ashkenazi Jewish descent. In an Israeli TV interview, she said that she identified as Jewish and had been brought up with basic observance of Shabbat and holidays like Chanukah. She even said she had a smattering of Yiddish. When the actress appeared on the PBS show “Finding Your Roots”, she learned some specifics about those branches of her family tree – and broke down in tears upon learning about their tragic Holocaust experiences.

Two Jews Walk Out of Israel

Laughter and Tears
It Takes A Lot Of Faith To Be An Atheist
How Instagram Brought Back This Nostalgic Soup
What Makes Eli Run?
Comments
MOST POPULAR IN Jewlarious
Our privacy policy