A Letter to My Soul Mate 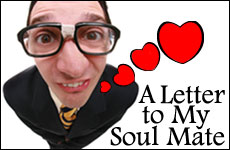 Since I haven't been able to find you, Soul Mate, I have decided to write you a letter.

Forgive me for not using your actual name. It's not that I'm being impersonal or forgetful; I simply have no idea what it is. You see, we haven't met yet. Tell you what -- how ‘bout I just refer to you as Julie? I've always liked that name and I wouldn't be surprised if you ended up having it. Y'know, it feels strange expressing my deepest personal thoughts to a woman I haven't even seen, but I'm making an exception for you because, after all, we will eventually be together for the rest of our lives. Plus, just because we haven't been able to locate each other yet, doesn't mean we can't share our feelings, right? This way, when we finally do meet, we'll be that much farther along in the relationship. It'll be like our seventh date. I hope you have enjoyed the first six -- I know I have. But that's jumping ahead.

I'll be honest -- this past year has been a difficult one. After many years of not being able to find you, the frustration of the endless search started to get to me. I started to feel as though I would never meet my soul mate, never meet you. My heart sank. It seemed like I was right on track for turning into the male Jewish equivalent of the old spinster with seven cats and a passion only for crocheting sweaters for friends and relatives lucky enough to have found relationships. I felt myself beginning to experience the Seven Stages of No Soul Mate Grief.

First, there was Shock -- the horrifying realization that it's absolutely likely we may never meet. It seemed as though every woman I met had a giant neon NOT YOUR SOUL MATE sign atop her head. That shock ended up driving me to drink. But I'm not big on alcohol, so I'm now attending a 12-Step program for Snapple iced tea drinkers. Today marks my third month without a Snapple. One day at a time.

It seemed as though every woman I met had a giant neon NOT YOUR SOUL MATE sign atop her head.

Denial followed shock. All evidence to the contrary, Julie, I informed anyone who asked about it, that it was simply a question of time and luck before I'd meet my soul mate. They'd nod and give me a half-smile, attempting to be supportive, but, oh yes, I could see the pity in their eyes. It was the same look they gave Jennifer Aniston after she said she's even happier with fill-in-her-latest-boyfriend-here than she ever was with Brad Pitt. Or that they gave Russell Crowe after he said that was the first time he ever threw a telephone at a concierge's head. They realized I was only fooling myself. I knew they were right, but couldn't admit it, wouldn't admit it. I felt like Nixon telling the nation "I am not a crook," or Michael Jackson saying with a straight face that taking a little boy into bed with you is the most loving thing a grown man can do. Was I any different, saying "My soul mate is just around the corner"? No, clearly, I was only fooling myself.

As I moved into the Bargaining stage, I attempted to cope with my loss of soul mate hope by making a deal with God. "Lord, if You allow me to meet my soul mate, I'll become a better person. I'll attend synagogue more often, I'll be kinder to people, I'll make donations to charity even if they don't send the cool, self-sticking address labels, I'll stop taking your name in vain when the driver in front of me is too slow to make it through the yellow light, I'll subscribe to PBS. I'll floss."

Of course, the Guilt stage was no big shocker to me, as I was quite experienced in that arena. It took the form of multiple "If onlys." If only I hadn't turned Kathy down just because she sounded like a goat when she laughed. If only Nicole Kidman would at least send me some response to my countless emails a bit more encouraging than that restraining order. Like she wasn't flattered that I have a shrine to her in my hall -- with its own back-up generator in case the power goes out.

It's no wonder I reached the Anger stage. I was angry at life for forcing me to keep paying monthly fees to online Jewish dating websites rather than the much easier and far more economical method of simply accidentally bumping into my soul mate in an elevator or supermarket, with appropriate Phil Collins or Elton John soundtrack music, just like in the movies. I was angry at myself for not having developed whatever relationship skills might turn me into a babe magnet. I was angry at my parents for not having given me the genetic gifts of George Clooney's looks, Bill Gates' intelligence, Fred Astaire's dancing ability, 50 Cent's street cred. Yes, that's right, a Jewish guy with 50 Cent's street cred. If we can put a man on the Moon, why couldn't that happen, too?

Yes, that's right, a Jewish guy with 50 Cent's street cred. If we can put a man on the Moon, why couldn't that happen, too?

Depression followed closely upon Anger, Julie. Look what you did to me and you didn't even know me. I lost interest in meeting my soul mate, much less dating at all. I sounded as though all the life and energy had been drained from my voice. I slumped. I couldn't even motivate myself to call a depression hotline. And here's how I realized I was truly, deeply depressed -- Snapple iced tea just didn't do it for me anymore. I went for canned Lipton. Canned Lipton, Julie! Canned Lipton! Do you know how deeply depressed a person has to be to open a can of Lipton iced tea? The horror. The horror. How can canned Lipton iced tea executives even sleep at night? But it's all I felt worthy of.

Finally, I became resigned to the fact that some people just aren't meant to meet their soul mates and apparently I was one of them -- the few, the lonely, the people doomed for the rest of their lives to face restaurant maitre d's who, while the Muzak is playing Roy Orbison's "Only the Lonely," look at them pityingly and ask, "Table for one?" and then shine a spotlight on them as all eyes follow them to their solitary table, offering looks of sympathy as the waiter removes one of the place settings and they cry out in anguish, "Please, for the love of God, look away, I am alone and hideous!"

So, how, you may wonder, did things turn out relatively well? How did I finally arrive at the last of the Seven Stages of No Soul Mate Grief -- the stage of Acceptance and Hope? Well, Julie, you see, there's some good news. Some exciting news. I met someone. Finally. Which to me pretty much constitutes proof of God's existence. I witnessed a miracle. Ten plagues? No. Sea splitting? No. Finding a woman who I like as much as she likes me? Bingo. Miracle. Hosanna. L'chaim. And I really like her. I even got rid of my Nicole Kidman shrine for her. Well, not totally; it's in storage. You never know. Is this woman my soul mate, Julie? Who knows? At this point, I'm not even sure what it would feel like to have a soul mate. I mean, come on, her name isn't even Julie. It's just that... maybe if you find someone you really like, who seems to like you, is pretty and smart and doesn't seem to mind your flaws and smells good and doesn't even bring up the subject of restraining orders, that's soul mate enough for any man. Even me. Now, if you'll excuse me, Julie, I need to go floss and get ready for synagogue.

Yiddishe Mammas
The Blue Beyond
Great Place to Live
Is Eating Supposed To Be Spiritual?
Comments
MOST POPULAR IN Jewlarious
Our privacy policy