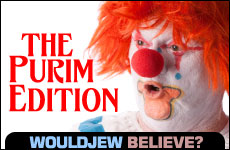 Outrageous, odd and interesting Jewish facts to get you into the Purim spirit.

Many of our holidays are a mixture of joys and oys! Purim of course, commemorates the deliverance of the Jewish people in ancient Persia from destruction in the wake of a plot by the evil Haman. In the story, recorded in the Biblical Book of Esther (Megillat Esther), Haman, royal vizier to King Ahasuerus planned to kill the Jews, but his plans were foiled by Mordechai and Queen Esther. The day of deliverance for Jews is one of pure joy as we feast, rejoice (and have been known to drink a little – or a lot). Here are some things you may or may not know … but are ever fascinating about Purim.

A BIT MEGILLAH OVER … “MAKING A MEGILLAH?”

The Megillah, the Book of Esther, as we know, is a loong detailed account that’s read in the synagogue during Purim. From this came the expression "the whole megillah," as in “… then he talked about his hernia operation and we had to hear the whole megillah,” meaning “oyyyy – every detail he tells us, for hours.” Over the years, the word has been expanded and embraced by Jews and Gentiles alike to describe a major drama or a big deal. Listen:

Judy Woodruff used it during the 2000 Presidential race, saying: "We're waiting for the vote from Florida. That's the big megillah."

A White House spokesman said of Clinton’s second inauguration, "The President and First Lady wanted it to be less of a megillah."

Not one of the above was dressed as Queen Esther at the time. Pity.

We Jews can credit Purim plays for giving birth to the modern Yiddish Theater, which began in Romania in 1876, notably through the work of producer, playwright, and manager, Abraham Goldfaden. It soon spread through Europe and the U.S., thriving for years in New York City. Great names and family dynasties dominated. Some of the most prominent were Sigmund Mogulesko who was the first great comedian of the genre in the late 1800s. Others included Aaron Lebedoff, Ludwig Satz, Max Bozyk, Michel Rosenberg, the Burstein family, Jacob Jacobs, Leo Fuchs, Henrietta Jacobson — and of course, Molly Picon, Menasha Skolnik and Muni Weisenfreund a.k.a. Paul Muni. Currently there are attempts to revive this art form, so … the next time you go see Der Yeshiva Bokher (a Yiddish version of Hamlet), take with you a bag of Hamentashen and maybe a bottle of Schnapps – or two!

NICANOR IS NOT TO BE IGNORED!

“What” you may ask is Nicanor, which I admit sounds like a salute to Santa in Rio de Janeiro.

Actually, it’s Jewish. This long forgotten holiday, occurring the day before Purim, was originally observed as a festival. By the seventh century, it all but disappeared, replaced by the Fast of Esther. Nicanor Day marked the anniversary of Judah the Maccabee's defeat of Syrian general Nicanor in 161 BCE – by beheading. Oy! If we Jews eat hamantashen (Haman's ears) on Purim, I shudder to think what we’d be nibbling on Nicanor.

Jennie Migel-Drachman, born in 1859 in Russia, daughter of a Jewish merchant, married Samuel Drachman at age 17. They went to Tucson, where they resided for 37 years, raised four children and pioneered Jewish life in the region. Sam acted as lay rabbi and was the first president of congregation Emanu-El, while Jennie was active in the Hebrew Ladies Benevolent Society. In 1886, The “Tucson Citizen” described the first Purim Ball Jennie helped plan, as: “The most brilliant social event in the history of Tucson.”

Kosher Comedy: The Rise of the Orthodox Comic

Schlock Rock Rocks
Who Was Josephus? The Controversial Backstory of the Famed Historian
Should I Break Up, Get Engaged or Keep Dating?
Time Is Your Precious Commodity
Comments
MOST POPULAR IN Jewlarious
Our privacy policy