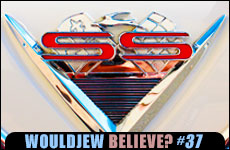 Weird wild and wacky Jewish facts like…getting out the Jewish vote in Pakistan.

The new 2014 Chevy SS won’t be storming Israel. The car that made its debut at the Daytona Speedway on February 16 has been sharply criticized for its “SS” moniker, which also stood for the Schutzstaffel, the paramilitary unit headed by Heinrich Himmler in Hitler’s Nazi Germany.

“Chevrolet has no plans to export the SS to Israel.”

While the car’s “SS” sobriquet means “Super Sport” and is part of many GM cars with the SS suffix, this is the first time the initials are being used without “Super Sport” included in the branding. According to the Hebrew daily Yedioth Ahronoth, Baruch Shuv, a manager of the Yad Vashem Holocaust memorial said: “the use of this name is very inappropriate… It is not a name that bring will them pride or success.”

Chevrolet spokesperson Michael Albano told FoxNews.com that “Chevrolet has no plans to export the SS to Israel.”

Always at the ready, I looked up “SS” and while of course one of its meanings refers to the Schutzstaffel, there are no less than 600 instances where the acronym stands for something else, especially in the digital age, from “Social Security” to “Screen Saver.”

STILL HAVE ANY LEFTOVER MATZAH?

Admit it. You’ve done the matzah-brei-ing, built 12 matzah houses with the kids, grouted your tile, and you’re still stuck with 250 pounds of leftover Pesach matzo (which is no doubt why they call it the bread of affliction). Ah, but celebrity dermatologist Dr. Ava Shamban has a brilliant new way to use the stuff. She has recipes to make our skin gorgeous post-Pesach, even as our waistlines are increasing. Her Oliv-ing in the Desert Scrub includes matzo meal, olive oil, and grapefruit juice. But there’s more … her Have A Berry Happy Seder Mask uses yogurt, blueberries, yogurt, and what else? Matzah meal. Now, if she could only come up with “The Thigh Matzah” count me in.

EDUCATING OUTSIDE “THE BOX”

While the Jewish Museum of Berlin has created a “unique,” never mind controversial way of educating visitors with their Jew in a Box exhibit, the Auschwitz Jewish Center kicked off a fundraising campaign on Yom HaShoah to save the house of Szymon Kluger (who died in 2000) the last Jewish resident of Oswiecim, Poland -- the town where Auschwitz was built. His house was next to the Center, which includes a restored synagogue, a museum, and educational facilities; however a retaining wall is so eroded, that a landslide could easily destroy both the house and the synagogue, according to Tomasz Kuncewicz, the Center’s Director.

Plans include turning the house into a vegetarian cafe called Oshpitzin — the Yiddish name for Oswiecim — where guests from around the world can engage in intercultural dialogue. Said Kuncewicz, “We want to respect the town’s heritage by offering local products and promoting local artists in Cafe Oshpitzin. By reinforcing the Kluger house, the synagogue’s future will also be secured, so that visitors to Auschwitz can continue to have a Jewish haven for reflection.”

Personally I’d much prefer sharing over hummus on pita than “performing” in a box and developing a mortal fear of flying peanuts.

On March 30, 2013, Het Parool, a local Amsterdam daily reported that Amsterdam fined hundreds of Jewish Holocaust survivors for non-payment of city taxes, in absentia during the Holocaust. It seems they were elsewhere – hiding or in concentration camps. A college student, Charlotte van den Berg, found the archived documents while researching Jewish homeowners. The abandoned houses were grabbed up by the Dutch Nazi party, while the owners were “otherwise occupied.” About 75% of Holland’s Jews (140,000) were murdered during the Holocaust. Ronny Naftaniel, a top advisor for the Center for Information and Documentation on Israel, a Hague-based watchdog on anti-Semitism found the discovery “shocking” adding, "The City of Amsterdam has never, to my knowledge, taken steps to correct its actions.” This even dwarfs “No taxation without representation!”

GETTING OUT THE JEWISH VOTE?

Pakistan’s English language paper, The News, recently cited the Election Commission of Pakistan’s report that “there are around 800 Jewish voters registered in Pakistan out of which 427 are women and 382 men.”

Given the fact that there are virtually no Jews in Pakistan, my guess is politicians won’t be speechifying at Pakistani shuls, or handing out bagels on street corners to woo the Jewish vote, which trust me, they wouldn’t get anyway. But … WouldJew Believe we’re a “silent” minority … according to Pakistan?

Famous Jews and Their Pen Pals

A Chanukah Call to Action
Scientific Curiosity and the Divine Encounter
Mind Over Milkshakes
Love the Convert
Comments
MOST POPULAR IN Jewlarious
Our privacy policy
Aish.com Is Looking for Great Writers