He Knows if You've Been Naughty or Nice 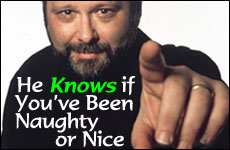 CBS's flagship investigative journalism program 60 Minutes is usually reserved for hard hitting segments aimed at covering and solving the world's most complicated problems. But on a recent broadcast, anchorman Mike Wallace was trying to solve a problem of a different nature -- mind reader Marc Salem.

Salem is performing for an audience which includes Wallace and a randomly selected group of group of 60 Minutes viewers. He asks Wallace to hold onto an imitation leather bag, while Salem goes into the audience and asks people to write down random numbers on his pad of paper. He then selects one audience member to come on stage and add them all up -- the final tally is 1695. "Please understand Mike, that there are over 155,000 different possibilities," Salem says with his characteristic understated showmanship. Salem then instructs Wallace to open up the leather bag he has been holding which contains a tape recorder that he asks Wallace to play.

In studio Wallace continues, "Do we know how he did that last trick? Nope. Do we think he can actually read people's minds? Possibly."

Mike Wallace continues, "Do we know how he did that last trick? Nope. Do we thinkhe can actually read people's minds? Possibly."

Just who is this Marc Salem, and how does he do that?

Born Moshe Botwinick, Salem was the middle son of a prominent Philadelphia rabbi. As an extremely intuitive child, he says he could guess what his Chanukah gift was before opening it, or where his parents were headed on vacation before they could even tell him. "Even at that age," Salem offers, "I think I started to realize that how people act gives away a lot more information than what they say."

After studying in a traditional yeshiva, he went on to college where he specialized in psychology and even more specifically, in non verbal communication. While completing his studies he continued to hone many of his innate skills, including a remarkable ability to tell if someone is lying. He has trained police officers, secret service agents, and even Fortune 500 companies how to spot liars. In 1998, lawyers involved in a tobacco trial hired him to weed out jurors with hidden biases against smokers. He has been featured on Fox News, CNN, and is a regular on Court TV.

His stage show, "Mind Games," which he has performed around the globe, showcases the products of his studies of the mind, his own natural abilities, and his sense of humor. But he is quick to point out that there is nothing supernatural about what he does. "I am not infused with the spirit of prophecy," says Salem. "I don't have any added spiritual enlightenment. This is why I don't discuss my orthodoxy in public. I don't want people to attribute what I do to my religiosity."

So how does he do it then?

"It's 50% heredity and 50% learned," Salem explains. "My father was very sharp at reading people and picking up what was happening around him which was an excellent skill for him to have as a rabbi. Unfortunately, he was so sensitive to other peoples' problems that he couldn't divorce himself from them. That stress is what killed him at 41. That's why I don't do any counseling. I consult, I entertain, I teach, but I don't counsel."

He has educated for over 20 years in his capacity as college professor, and has just released a book titled The Six Keys to Unlock and Empower Your Mind which he hopes will open up his brand of teaching to an even winder audience.

Salem offers a preview of his number one key to unlocking the mind. "The most important thing people have to learn is how to pay attention."

Seems simple enough -- we can all do that can't we? According to Salem, we can, but we don't. "Unfortunately, modern technology greatly impedes our ability to concentrate. Generations ago, people were much better at paying attention than we are today. For example, one reason that God gave the Jewish people an Oral Torah along with a written Torah was so that peoples' minds could be sharp. We could argue and debate the intricacies of the law, and by doing so, we could keep the Torah alive. But once it was written down, we lost our memories because we just needed to look things up in a book."

So how do we unplug ourselves from technology and reconnect in a way that allows us to unlock the power of our minds? Salem suggests taking time out for introspection or meditation. "The Hebrew verb to pray – 'lehitpallel' – is reflexive, so it basically means ‘to look inside yourself.' We should use prayer as a contemplative and meditative experience, not just for making requests."

"The Hebrew verb to pray – 'lehitpallel' – is reflexive, so it basically means ‘to look inside yourself.'"

Besides setting aside some time each day for meditation or prayer, Salem also lauds the benefits of a day of rest. "I think that Shabbos is a perfect opportunity to take time out to relax, unplug ourselves from things that are competing for our attention, and refocus our energies on that internal voice in our guts that tells us what is truly right or wrong."

It is clear after talking to Salem that he is not only principled about his Jewish observance, but principled when it comes to the Jewish people as well. Because of his work, he has come to know famed Israeli mentalist Uri Geller who recently became a reality TV star in Israel due to the success of a show he produced called The Successor where he chooses Israel's next great mentalist. Although Salem calls Geller a friend, he refused Geller's request that he be involved in the production of the show.

"I didn't want to profit on the emotions of the Israeli people, especially right now," Salem explains. "The truth is, I think that the reason why this show was so successful was because people are going through such a painful period in Israel right now due to what happened during the war in Lebanon. They are looking for something supernatural -- something spiritual to grab onto. But I would prefer that they look elsewhere where spirituality actually exists. Answers to life's questions are not contained in some TV entertainer who can supposedly do strange things."

Salem makes it clear that in his show, he is not answering any of life's questions, but after watching him perform, it is impossible not to be convinced that he can indeed do some strange things. In the 60 Minutes special, while blindfolded, he chose someone from the audience and began describing her recent vacation.

"To the left was the water. To the right was a straw hut."

"Yes!" she says incredulously. She is just as shocked as anyone else who has seen Salem perform.

Schlock Rock Rocks
Scientific Curiosity and the Divine Encounter
Mind Over Milkshakes
Love the Convert
Comments
MOST POPULAR IN Jewlarious
Our privacy policy
Aish.com Is Looking for Great Writers