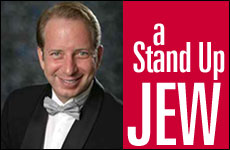 Comedian Steve Mittleman has performed for just about everyone. But his favorite thing to do is to make Jewish people laugh.

Steve Mittleman has been on the Tonight Show with Johnny Carson and Jay Leno. He's been on Late Night with David Letterman and has acted in movies opposite Steve Martin. He's played in comedy clubs and corporate events around the world. But his favorite thing to do make Jewish people laugh.

"There's nothing more fun than playing for a Jewish crowd," says Mittleman in an interview from his home in Los Angeles. "They are bright. They enjoy thoughtful material. They don't mind laughing at themselves, and they get the ‘wink' behind a joke that I feel like only bright audiences really get."

As an example of a joke that is enhanced if the "wink" is understood, Steve cites the following bit:

"My apartment was robbed. I live alone. The police told me it's an inside job. They took me in for questioning, so I confessed and gave everything back. The line-up was tough. They put me in front of a mirror. I pointed -- I said that's the guy. Then I made a run for it. They caught me, so I dropped the charges. I took out a restraining order. I am not allowed within 50 feet of myself."

Steve Mittleman has performed that bit and gotten laughs hundreds of times. But he says that he didn't start getting laughs until he was in his mid-teens. "I was a shy kid and kind of funny looking so I never wanted to be the center of attention. But then I started developing a sense of humor about the way I looked. It was like an ‘I will tell you when you can laugh at me' kind of thing. That's when I started to realize that I was funny."

Steve fondly remembers the first time that he got up on "stage." "When I look back, my Bar Mitzvah was really my first performance. I was six feet tall and six inches wide. I was wearing my first suit which I outgrew during the ceremony. I had one of those crackly voices that didn't settle until I was 15 so I didn't really do my Torah portion justice. Maybe that's why I didn't get a ‘call back' from the synagogue president."

I was six feet tall and six inches wide. I was wearing my first suit and I think I outgrew it during the ceremony itself.

Fortunately, Steve's Bar Mitzvah experience didn't sour him on the prospect of performing. While in college, he started hanging out and performing at the Improv comedy club and he quickly realized that making people laugh was something he wanted to do for a living.

But his parents were not as convinced. "My father told me to try my best at whatever career I chose for myself. My mother on the other hand wanted me to do anything besides comedy. Every so often she would say something like, ‘You know, your cousin Marvin is an electrician, and we hear it's a very nice profession. Maybe you should talk to him -- he has some connections in the Electrical Engineers Union.'"

But the only connection Steve wanted with electricity was to have his name in lights. He got his wish when he won the "Laugh off" on the Showtime Network, which he credits as being his big break. From there, he started performing at the comedy clubs, casinos and corporate events across the country.

Now an established veteran on the comedy circuit, Steve insists that performing for his coreligionists brings him the most satisfaction. "I do a lot of shows for Jewish audiences. I recently got a call from a shul having a comedy night in the Washington DC area. I saw the address of their shul and couldn't help but laughing -- they are on Bacon drive. What's the cross street? KKK Boulevard?"

And what type of material does Steve perform at these Jewish shows? He gives a quick sample:

"I did a show at a JCC in Salt Lake City Utah. A guy came up to me afterwards and said he was part Mormon and part Jewish. He said his name was
‘Brigham Youngman,' he said, ‘take my wives, please!'"

"And, who would hire a first time mohel [ritual circumciser]? You have to have a great gift of gab to talk yourself into that first gig. What do you say, ‘I'll give you half off?'"

Steve Mittleman is not all jokes though -- he has a serious side too. One of the things that he likes to get serious about is, ironically, comedy. "I think the Jewish sense of humor is a result of our need and ability to survive; it has been something of a survival mechanism. We are very deep thinkers, and we can think ourselves into darkness or light. It's the dichotomy of our people." Mittleman adds, "The healthiest sign of a people is to know when you need to lighten up."

Before concluding the interview, Mittleman can't resist telling one more of his Jewish jokes. "You know that Jews were the only survivors in the Titanic. They were found clinging on to the mid night buffet table. It was 12:01 and they were famished."

An L.A. Latke Lament
In the Shadow of David and Goliath
Where Do the Laws of Nature Come From?
Saadiah Gaon, Rashi and Maimonides: How Three Rabbis Revolutionized Judaism
Comments