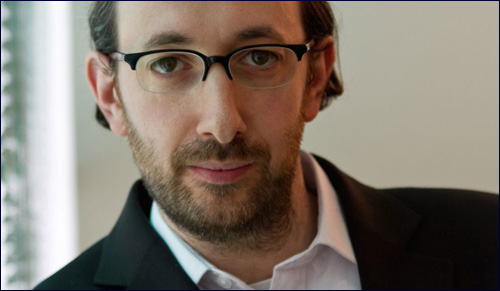 Meet the UK’s only religiously observant stand-up comedian Ashley Blaker, the only person in TV who doesn’t own a TV.

If you were to walk into a comedy writer’s room at the BBC, the last thing you would think you might see is a charedi Jew with beard, peyos, tzitis out and the like. But if comedy is about the unexpected, then British comedian Ashley Blaker is hilarious. Blaker is writer and producer of shows such as Pompidou, The Matt Lucas Awards and Little Britain (think Monty Python) and yes, in the halls of the BBC he is a rather odd site. So how exactly did a nice observant Jewish boy end up in comedy and at the BBC of all places?

How did a nice observant Jewish boy end up in comedy and at the BBC of all places?

Ashley Blaker grew up in London, England in a traditional shul going, but non-orthodox home. He attended both Oxford and Cambridge where he did graduate work in history concentrating on 17th Century Christian theology. Ashley soon married Gemma and apparently firms weren’t clamoring for graduates of early modern Church history so he picked up the newspaper and perused the jobs section. There, a particular ad caught his eye. It read, “Do you have funny bones? The BBC needs comedy producers!”

Blaker had no prior comedy writing experience but somehow talked himself into a job. During his first week at the Beeb, he hooked up with a childhood friend named Matt Lucas who was already making a name for himself as a comedian and the two of them connected comically. That Lucas/Blaker connection went on to yield Little Britain, a wildly successful British sketch comedy show as well as The Matt Lucas Show and others. Blaker also currently has a television show in development with NBC.

While things were progressing professionally for Blaker, spiritually, something was missing. He always considered himself traditional but he wanted to have more Jewish practice in his life so he started attending shul on Shabbat. Soon, the rabbi asked Blaker to attend during the week as they were struggling to get a minyan. As they might say on Seinfeld…and yada yada yada… he was charedi.

Of course it was much more gradual and complex than that. So was the development of his family, four boys and two girls, two of whom were diagnosed with autism, along with a daughter with Down Syndrome whom the Blakers adopted. Not the typical family life for a TV producer.

Then again, Ashley Blaker is not your typical TV producer. “I am probably the only person in TV who doesn’t own a TV,” admits Blaker. “I don’t shake hands with women for religious reasons. I realize that there are differing views on that but that’s where I feel most comfortable. On the other hand, I never raise my voice at work even though I know a lot of producers do.”

Ashley Blaker isn’t just a religious Jew in a secular workplace but a religious Jew in a country where anti-Semitism is on the rise working for an organization, the BBC, who some would argue is partially to blame. But his approach is not one you hear every day. “I work at the BBC and of course they do have a reputation for being anti-Zionist,” Blaker admits. “And during last summer’s war in Gaza I went on Twitter and saw some of the comedians I was friends with and some of the anti-Israel stuff they were posting and it was just terrible. But my approach is simple: do what God asks of us and realize that He is in charge of the world. What more can you do? You aren’t going to change people’s minds. And I am not going to change who I am or what I believe. The only thing you might be able to do is change people’s impressions through personal example. That’s why for me, making a Kiddush Hashem (sanctification of God’s Name) in the world is so important.”

Of late, Blaker has expanded beyond his own real life fish out of water comedy – or as he likes to call it, “Gefilte fish out of water” – by scaling back his writing and producing in favour of performing his own stand-up comedy. And this too came about someone unexpectedly.

He was asked to speak at the annual Rabbinical Council of Great Britain conference and when the rabbis saw him get up they assumed, by the way that he was dressed, that he was a colleague. They soon found out how wrong they were. “Afterwards, all of the rabbis asked me for my card and asked me to come and perform at their shuls,” Blaker relates. Since then, he’s been performing non-stop at synagogues, charity events and for Jewish groups in the UK and more recently has been invited to the United States as well. And in November he starts touring his full-length stand-up show – ‘Ungefilterd’ – at over 30 venues around the UK.

It appears that this fish, has finally found his water. “Even though I’m entertaining people, I think I’ve really been able to make an impact. My stand-up opens people up to the idea that frum (religious) people can do different things and be funny. You can be frum, or shomer Shabbos, or wear a Magen David or whatever, and there shouldn’t be any barriers to you in terms of what you do in your life.”

Blaker is a trailblazer of sorts but recognizes that not every charedi Jew is going to become a stand-up comedian or TV producer. Having British comedian Russell Brand over for dinner (which he did) is not for everyone. What keeps him grounded though is his steadfast commitment to Jewish observance. “I do what I do for a living but I am uncompromising in my observance. There are no compromises. I know that there are people who take their kippas off at work, but that’s not me. I perform stand-up dressed exactly as I would in shul or at any time.If NBC were to say to me, ‘We are going to make you famous if you just make this compromise,’ I would never do it. No compromises.”

Ashley Blaker can be reached through his website here .