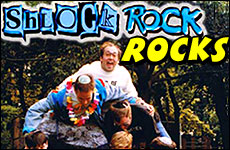 Making a livelihood in Jewish music hasn't been easy, but Lenny Solomon has loved every minute of it.

"Well they lived in many towns from Cordova to a place called Fez,
Headed for the holy land but they settled in Cairo instead.
Rambam would write so fine, had a knowledge that was Divine,
You know that he's the Rambam, Rabbi Moshe Ben Maimon.

The above is not a joke. It's a real song, by a real band that has released real albums. Over 29 of them to be exact. Add over 2000 live performances around the world to their resume and you will start taking them seriously. "They" in this case is Lenny Solomon's Schlock Rock, a band some have described as Jewish music's Weird Al Yankovic. In the Jewish music parody business now for over 23 years, you just have to ask: how exactly did this happen? For Lenny Solomon, it has been an interesting journey.

Lenny Solomon was born in New York into a musical family, boasting cantors on both sides of the family tree going back for generations. Young Lenny showed an aptitude for music but decided instead to pursue a career as an accountant. Ironically, his parents encouraged him to become a musician, but he was adamant that he needed to find a career where he could earn a decent livelihood.

But things suddenly changed when he attended an NCSY shabbaton in the early 1980s. He saw some people performing parodies of popular songs, but with a Jewish message, and the kids seemed to love them. So Lenny decided to write a few songs of his own and started performing them with a band he formed. For three years he worked for an accounting firm during the week, and played NCSY conventions on the weekend. Then in 1985 he released his first album and called it Schlock Rock. Recalls Solomon, "In 1985, after my third year of accounting, I looked at the rest of my life as an accountant and decided that I should at least give music a chance." The result? Well, Lenny Solomon is not an accountant.

"I looked at the rest of my life as an accountant and decided that I should at least give music a chance."

The album met with considerable success, and Lenny started hearing encouraging stories. "I got a letter from a lady who said ‘I have a brother who hates everything about Judaism except for your album.' He plays it 24 hours a day.

"A girl wrote me a letter that she was walking to shul on Yom Kippur singing one of my songs that says that you're not supposed to wear leather shoes on Yom Kippur. When she got to those lyrics, she realized what she just said, and ran back to her house, to put on sneakers, and went back to shul."

Solomon started getting requests for live concerts, and since 1988 Schlock Rock has been his full time profession.

He didn't do it without detractors however. At first, some people in the religious community were opposed to what he was doing – trying to teach Judaism using secular music. "I had to really develop a thick skin," admits Solomon. "I didn't know how to respond to the criticism at the time, but I began to realize that the people who had a problem with what I do probably never needed my music. But if you speak to a pulpit rabbi in Omaha Nebraska who needs to reach out to a secular kid, he's going to reach for my CD. Every day I get letters from children and grown ups who say they owe their knowledge of Judaism to Schlock Rock. That makes it all worth while."

Solomon sees in Schlock Rock something of a Divine mission. "The whole thing was God. I did not plan this career. I couldn't have planned this career – it's so outrageous. 29 CDs over 2000 shows worldwide. And my sole purpose has been to allow people to connect with their heritage, their roots, have a positive association with Judaism. God directs everybody. Why did he pick me? I don't know, but it's my job and I accept it. I love doing it."

Solomon also has a soft spot for the Land of Israel, and tries to convey the sentiment through his music. "I have a song titled Born in the USA, Making Aliyah Today. I feel that the place for every Jew is in Israel. I've written a good 15 songs about the importance of living in Israel. I tell people you don't have to move today, but you have to make a plan, make Israel a central part of your life."

Looking back on that fateful decision he made 25 years ago to forgo a career as an accountant for a life in Jewish music, does Lenny Solomon have any regrets? "None at all. It's hard to make a living doing this don't get me wrong, but I wouldn't have it any other way."

You can visit Schlock Rock's website by clicking here.

An L.A. Latke Lament
Were Adam and Eve Jewish?
How I Learned to Love the Multiverse
10 Big Jewish Inventions
Comments