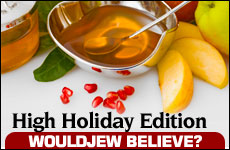 No eating pickles on Rosh Hashanah?

Rosh Hashanah and Yom Kippur, our High Holy Days, are revered by We Jews. On Rosh Hashanah, Jews the world over gather in synagogues to celebrate the day God created Adam and Eve, the first humans. Symbolic foods are eaten, such as apples dipped in honey and round challahs, for a sweet year; fish heads (so we can be "like the head and not like the tail"); pomegranates (for health, happiness, and plenty for the New Year); and carrots (the Yiddish is "merren" which also means “more,” and represents more of the good things in life.) For Sephardic Jews, carrots are symbolic of the phrase "Yikaretu oyveynu" or may our enemies fail to do us harm.

How many of us know that on Rosh Hashanah 1963, Larry Yellen sat out what was to be his Major League debut for the Houston Colts.

On Rosh Hashanah we wish each other “May you be written in for a good year.” But Rosh Hashanah is not the end of the judgment; it is only on Yom Kippur that our judgment is made final.

AND FROM THESE SEEDS

Interestingly, the pomegranate is believed to possess 613 seeds … the same number of Jewish mitzvot (commandments). The fruit then also serves as a reminder to God of how meritorious the eater has been during the previous year.

DON’T EVEN THINK ABOUT IT

In Ashkenazi tradition, nuts are forbidden on Rosh Hashanah, since in Hebrew, the numerical value of “egoz” (nuts) is equivalent to the word “chet” meaning sin. Finally hold the pickles! Pickles, a great Jewish food favorite, are never served so as not to start anew with a sour taste.

In order to prevent Yom Kippur from falling on the day before or after the Sabbath, a rabbinic calculation, insures that the first day of Rosh Hashanah can never fall on a Sunday, Wednesday, or Friday. This was a highly logical decision. The rabbis needed to make sure Jewish laws forbidding the preparation of food, or burial, could never occur on two consecutive days.

A ROSE BY MANY OTHER NAMES

We call the start of the Jewish New Year, “Rosh Hashanah.” But the holiday has “nicknames:”

The Book of Leviticus 23: Zichron teruah – a remembrance of sounding of the Ram’s horn. It’s also referred to as Yom teruah, the day of blowing.

The Talmud: Yom HaZikkaron, or Day of Remembrance, and Yom Ha-Kaseh or the Day of Concealment, as it falls at the start of the month when the new moon may still be hidden.

The term “Trumpet Feast” was also used, according to Philo of Alexandria.

FOR YOU SPORTS FAN: DENKS GOD THEY DIDN’T PLAY!

Leave it to the Jews! We admire those athletes who didn’t play on the High Holy Days, as much we do their amazing records! I’ve written about Sandy Koufax, Ken Holtzman, “Hammer’n Hank” Greenberg, and Ron Blomberg, “The Sundown Kid.”

But how many of us know that in 1963, Larry Yellen, in what was to be his debut for the Houston Colt .45s, listened to “mama” and sat out the game against the New York Mets? Unlike Koufax, there was little press, as Yellen’s career in the majors was short. It ended in 1964, after pitching in only 14 games.

On the other hand …

The “bomber from the Bronx,” Hank Greenberg, the first Jewish ball player elected to baseball’s Hall of Fame, who refused to play on Rosh Hashanah, inspired the Detroit Free Press to publish a special New Year’s greeting to him on its front page in 1934 — in Hebrew

Lydia Hatoel-Zuckerman, one of Israel's top female fencers, competed in the foil event at the 1984, 1992, and 1996 Olympiads. In 1979, at the age of 16, Lydia became Israel's women's fencing champion, a title she would hold for many years. The Guinness Book of World Records listed her after she had won the title six straight times. However, she missed the 1988 Seoul Olympics because the fencing competition fell on Yom Kippur. She won the bronze at the 2001 Maccabiah Games in the individual foil competition. In 2002, the 39-year-old reached the semifinals of the European Championships only one-and-a-half months after giving birth to her third child.

1. At the beginning of the New Year, one should eat gourds, fenugreek, leeks, beets, and dates (Talmud, Keritut 6a), as some grow and ripen early, signifying increased merits, while others are sweet, representing a sweet year.

2) A little like a Jewish Groundhog day, according to Rabbi Z’vid, if the first day of Rosh Hashanah is hot, so will be the entire year – and vice versa.

3) Live or Die? According to Rabbi Ammi (Talmud, Horayot, 12a), to determine if one will live out the year, during ten days between Rosh Hash and Yom Kuppur, light a lamp in a house with no drafts. If light continues to burn, you’ll live.

THE NEW YEAR IN THE WILDERNESS

According to The Pictorial History of the Jewish People, one of the first Jews to arrive in the “wilderness” of Ohio was a watchmaker from Plymouth, England, Joseph Jonas. While friends tried to dissuade him from heading West, for fear he would forget his religion among non-Jews, Jonas, vowing never to forsake Judaism, was fascinated by the prospect of settling on the banks of the Ohio. It took him two difficult months to make the journey from New York to Cincinnati finally settling in 1817, where for two years, he prayed alone. Finally he persuaded his brothers and two others, also Jews, to join him. In 1819, prayers rang out in the wilderness as this tiny group of Jews celebrated Rosh Hashanah! Not only were the High Holidays celebrated, but Jonas and his group started the first Jewish Congregation in Cincinnati, Kahl aKodish Bene Israel.