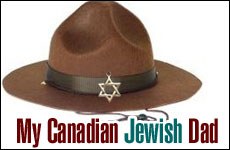 Everyone knew you could count on my dad.

As Father’s Day approaches, naturally my thoughts turn to my own: Louis “NMI” Winston (Weinstein). The “Louis” he insisted, was pronounced “Louie” as “Louis XVI”. The NMI stood for “no middle initial.” As the youngest of six (the oldest two from his widowed father), he was the only “NMI” in the bunch. It’s possible that his mother, Manya, for whom I was named, charged at age 24 with running a farm in Northern Ontario, managing the local Jewish girls’ club, cooking, housing relatives from “the old country,” taking in sewing, organizing labor strikes, and then, raising her brood alone (my grandfather, in ill health, died when “Louie” was a baby) was too busy to think of a middle name.

Through my father I learned all Jews aren’t stereotypical “New Yawk.”

Or to notice that “little Louie,” age three, like Mary’s little lamb, followed his next elder brother to school one day – and stayed.

Yes, my dad had independence thrust upon him early. By age five, he, like his sibs worked for a penny, and developed strategies for streetcar “sharing” – one fare, and five sibs running and replacing one another at different stops.

Dad never thought of himself as “poor.” Underfinanced, maybe. But never “poor.” Poor was a mindset, and his was to view life as rich with fascinating possibilities.

He went to New York at 16 to make 35 cents an hour, pioneered an industry, spent four years in the India-Burma-China theatre during WWII, suffered 14 bouts of malaria, then met my mother at Mrs. Ginsberg’s house in Brooklyn, the mama of a mutual friend. In her thick Yiddish “hecsent” she warned her: “Dere’s a soldier here. From Ceneda. He’s a bissel meshugge from the var, and losing his mama.” His beloved mother died the day his ship docked. The Army refused to let him muster out a little early. After four years in the jungle he arrived 60 minutes too late to say good-bye.

So, he threw all the furniture out a second story window.

Ok, he was a little shaky. Yet, when he appeared at the top of the stairs, thin, in a bathrobe, hair disheveled, my mother fell instantly in love. They married within two months and moved to Flushing, New York.

Like many of my peers raised in New York City, the second “Jewish homeland,” we arrogantly assumed that American Jewry was synonymous with “New Yawk Jews.”

But it was through my father, that I learned all Jews aren’t stereotypical “New Yawk.”

Canadians, for example, actually stop at crosswalks, talk to answering machines, don’t know from road rage, and if you’re lost, they’ll walk you -- to another Province. Perhaps because they never went through that adolescent “revolution,” Canadians are well, nice. Enterprising. Optimistic. Helpful.

Unlike the many Jewish Dad “New Yawky” stereotypes:

My Canadian Jewish Dad … Fixed things! Yes! A Jewish dad who didn’t stare in a stupor under car hoods, bang and “geshrei” at toilets to make them flush, or have panic attacks at IKEA. Canadians are doers. From pipe clogs to building machinery that would frighten John Deere, nothing remained tsebrokhn (broken) in Dad’s orbit. Except for the rare times, he broke it. Dad once lit a match under my car to “see what the trouble was.” By the time Emergency Services arrived, Dad emerged from the flames looking like Peanuts’ Pigpen with a sweet “oops” on his face. But he most enjoyed fixing -- us. At the mention of a splinter, his eyes lit: “Bring me a needle from my sewing kit!” Paralyzed, we let him “operate.”

My Canadian Jewish Dad … cared how contraptions worked. Canadians are a curious people. Whistling, they adore taking things apart, from computers to, well … once, a neighbor, owner of a quick mart, brought over a can of mace. With a houseful of people, my dad, fascinated, futzed with it. Dad’s curiosity was quelled. He learned that “futzing” with mace can send 50 humans careening through screen doors in 10 seconds flat, leaving cartoony cut-outs worthy of the Roadrunner.

My Canadian Jewish Dad … didn’t buy, he made! Or found “deals.” Canadians are endlessly thrifty and resourceful! Need a toothpick? Chop down a forest and shear a sheep. Out of butter? Churn! Nothing in our house was ever “obsolete” – until it blew up. Dad canned enough crabapples from our tree to end world hunger. Need a Purim costume? He turned me into a working shower – with curtain. Less successful were his “deals.” Dad used a mail order house. In Belarus. “Need a coat, mamala? I ordered you three -- 150,000 rubles!” (47 dollars.) They arrived made of a mystery fabric I’m sure will be featured on “Life After People.”

My Canadian Jewish Dad … played ice hockey! “Wind chill factors?” Feh! He and his sibs swam like Mark Spitz in Lake Ontario -- in January -- saw icy streets as skating ops, and knew from pucks, balls, and baskets. With unset broken noses, his sisters and brothers were champions! Sadly, his daughter was AC (Athletically-Challenged). For 10 long years, my Canadian Dad tried to teach me to float. Like a matzoh ball, I was a natural sinker.

My Canadian Jewish Dad … believed the world was his responsibility. When I was a child we lived in a working- class neighborhood where gelt was scarce. When a little girl across the street was ill and her immigrant parents refused to call a doctor, my Canadian Dad tended to her for a solid 72 hours until her fever broke. Throughout his life, if a neighbor needed a new porch, mentioned a broken sink, or was stranded in say, Philadelphia, everyone cried “Call Louie!” Everyone knew he’d be there.

My Canadian Jewish Dad … was ardently pro-Jewish and pro-Israel. During the War, in the jungle, he demanded Services for the Jewish soldiers. When anti-Semites kicked up trouble, my dad stood up and organized the few Jews in the neighborhood, including those who “didn’t want to make a fuss.” Despite a tight budget, he laid the cornerstone for the first synagogue in the area.

From my Canadian Jewish dad, with his Yiddish-British background, morality wasn’t implied, it was taught. Ethics were essential. Trust was inviolate. Generosity was expected. Responsibility was unquestioning. Jewish principles and Yiddishkeit weren’t merely guidelines, or golden tickets to heaven. They were living values that could never be compromised.

The day he died the house was full with family, friends, the myriads of people he’d helped, mentored, loved and was loved by.

Yet almost comatose, in severe pain, he hung on. I knew why. He couldn’t, wouldn’t ruin a party, even as his own was ending. I asked them to leave, took his hand, and said, partly in Yiddish, the most difficult words I’d ever said or would say: “Everyone’s gone now. You did great. We love you, Daddy. And, we’ll be okay. It’s time now … for you to rest.”

My Canadian Dad died right then, his hand in mine. Remember this touch, I thought.

And this upcoming Father’s Day, as every day, I remember.

The Office: The Lost Purim Episode

Schlock Rock Rocks
In the Shadow of David and Goliath
Where Do the Laws of Nature Come From?
Saadiah Gaon, Rashi and Maimonides: How Three Rabbis Revolutionized Judaism
Comments