My Life as a Jewish Cartoon 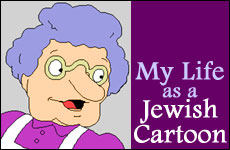 Playing a Jewish cartoon character on "Rugrats" taught me about who I am in real life.

One afternoon in 1989, having just been cast to play my first cartoon role on some pilot called "Rugrats," on some new network called Nickelodeon, I received a frantic call from my voice agent (various aspects of me having been farmed out to an armada of acting, writing, singing, commercial and cleansing agents). Producers in New York wanted to audition me via phone to also play "the grandma from the Old Country" on the series that very afternoon!

"Which old country?" I asked.

"The Jewish one!" responded my agent.

Oy. There wasn't much else to go on, beyond a few adjectives faxed with rough sketches of a beefy (okay, fat) old woman in granny glasses, gray bun, apron, baggy stockings and scuffies.

"How cliche," I scoffed to myself. But I wanted the gig. Playing two characters on a show would be a coup. It would be fun to be grandma to a bunch of animated babies, to play the mother of the character I had already recorded -- I might be able to even talk to myself as my daughter in scenes. And get two lunches, and two cracks at the centerpiece at the holiday dinners....

The few audition lines read something like "Oh Lordy, Lordy, I'm so angry at you!" and "Boris, what have you done with our grandchildren, you silly man?" Although the show had been created by Jews, this script had clearly not been written by them. Having had no Hebrew schooling, beyond the family arguments of my childhood, my feel for enhancing this material was spotty to say the least. My agent, who feels (hopes) my gifts are boundless, said "Improvise!" And most non-Jews assume all us Jews just know the whole patois, that it's built in genetically or something.

During the two hours I had to prepare, I searched closets and dim memories for mementoes of my grandmothers. Both had passed away while I was still enduring the bouncing saddle-free on the knees bit, and the "I got your nose!" bit, as they'd pinch my nostrils, then the tip of their thumbs between their second and third fingers. I knew my nose had no thumbnail, but went along with it, humoring them because I loved their attentions and, much like with the wine for Elijah bit, you didn't want to ruin grownups' delusions about life or your awareness too soon.

I found two photos in which I was being hugged within an inch of my life by each of them, one Russian, one Austrian, and grinned in fond remembrance. Oh, there was a good reason I called them "bubbies" and they called me "bubalah" -- that was the sound one invariably made when squashed suffocating in their arms. "Blububbulalahabublah."

I was shocked to realize they both predicted this cliche role to a T, both plump with gray buns, horrible hosiery and unflattering footwear. Amazingly intuitive, this animator! I squeezed my brain really hard, recalling their smells, cooking, and very faintly their shoulder shrugs, upturned hands and plaintive inflections. Were those just East Coast grandmas? I needed more.

I rushed to the local kosher deli owned by a German Jew, Mrs. Gerechter, who had migrated up from Mexico, and who, I must add, also looked remarkably like the cartoon sketch. What IS this!? Had Jewish grandmas been born this way, aged this way or had they been societally, genetically engineered to give our culture comfort?! Maybe this was just God's way of getting me the job and a belated Jewish education.

Maybe this was just God's way of getting me the job and a belated Jewish education.

She was flattered that I showed so much interest in her (I was taping the whole thing) and began to share colorful tales of her life in Germany. She was so winningly, shockingly forthcoming that I got in the habit of going to pick up more food and history there often, and not just to bone up on a role. Mrs. G. made me miss the grandmas I never got to know.

So with a wing (turkey) and a prayer (an "oiy vey"), I placed the conference call. And with three different producers prompting from different cities with differing ideas of "Jewish grandma," I amalgamated a character named Minka, married to a gruff schmendrick named Boris, improvising in Yiddish gibberish how I thought she should sound and got the job on the spot.

T'was a mitzvah! Over the next decade and a half, I learned so much more Jewish lore whilst playing Minka. I got to narrate the first animated televised Hanukah special, and to play a pivotal role in the "Rugrats Passover Special," too, opposite the gifted Michael Bell as Boris, with whom I got to squabble in all our episodes. We came as a unit in the writing. Those episodes were cited by the National Foundation for Jewish Culture for Outstanding Achievement in the 2001 Jewish Image awards. Imagine, me! Lapsed Jewess that I am, I got fan letters from a broad spectrum of Jewish adults worldwide.

But strangely, I also got a letter of complaint -- from my own mother no less! She felt the depictions ugly and Anti-Semitic. I was amazed.

"So, Mom?" I asked. "Do you think the cartoon character Minnie Mouse demeans mice, or Olive Oil insults women? They ain't no decorations."

"That's not the point!" She felt that Minka's whininess and Boris' big nose were the sorts of specific characterizations that ridiculed rather than celebrated our people. And, besides, Minka seemed a stinging send up of her own mother. Hmm. She picked that up, too.

Alas, prejudice is in the eye of the offended. I expressed understanding and sympathy and helped buy her a condo and a new car with my "Rugrats" residuals to assuage her upset. We Jews provide for our elders, I'd learned. And, after all, she was the prototype for my Didi Pickles character on the show, a depiction she found unattractive yet acceptable, as the character was so universally beloved.

So, I now give thanks to my living mother and my late bubbies for the belated relating to my people. Now I get to have the honor of being a Jewish grandmother too – even if I only get to pinch cartoon cheeks.

The Band's Visit
Why My Iranian Mother Didn’t Want Me to Become a Religious Fanatic
The Jewish History of Prague
Why the Sexual Revolution was Bad for Women
Comments
MOST POPULAR IN Jewlarious
Our privacy policy
Aish.com Is Looking for Great Writers