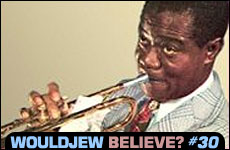 WouldJew Believe that the jazz legend who put the “Hello” in “Dolly” was heavily influenced by a family named Karnofksy? The King of cornet and trumpet (with voice and scat to match) Louis Armstrong was born on August 4, 1901 in New Orleans to “absent” parents. Enter the Lithuanian-Jewish immigrants. He worked for the Karnofskys in their junk biz. They became his surrogate family, offering bed, board, love, and spiritual nourishment. They also gave him his first instrument which sent him soaring as a jazz innovator and worldwide ambassador for humanity. He later wrote a memoir of this relationship (“Louis Armstrong and the Jewish Family in New Orleans, La., the Year of 1907) saying,” I was only seven years old but I could easily see the ungodly treatment that the White Folks were handing the poor Jewish family." From them, he wrote he learned "how to live—real life and determination." Louis Armstrong not only spoke Yiddish, but wore a Star of David for the rest of his life!

In 2007, Jews for Obama, a volunteer not for profit group in New York created “Obama 08” yarmulkes, to stump, head-first, for their guy. Though not officially endorsed, the future Prez was presented with one, showed it off to his Secret Service detail and got a really big kick out of it. The charge for the kippah in 2007? Five bucks plus five more for shipping.

Well, they’re back just in time for the 2012 re-election campaign! The ivory suede yarmulkes are printed with “Obama 2012” in navy blue and red, and available through Obamulkes.com. The price? The website claims Ebay merchants are charging $25 plus tax for Obama yarmulkes, “but we’re offering our original 2012 Obamulkes at $9 each, plus a flat fee of $5 per order for shipping & handling anywhere in the US.”

Yes! The price has gone up! I guess they haven’t been following the economy. Now, I wonder what the price would be for say, a Mitt Menorah, Ron’s Ram Horn, or Gingrich grogger? Purim is around the corner after all…

Remember when as kids, we had pen pals? These were compatible kinder at a distance with whom we shared thoughts, events, feelings?

Louis and “Mu” exchanged letters, cards, even opinions about Israel from the time the dictator grabbed Libya in 1969 through 1988. Schlamowitz ended his 20-year "pen pal" relationship after the 1988 Pan Am bombing. "[Gaddafi] committed crimes against humanity. I didn't want to get mixed up with him," he told the New York Post.

Schlamowitz, an 81-year-old Brooklyn resident has a binder filled with 6,000 autographs from people as various as Yasser Arafat, Marilyn Monroe, and Barack Obama. He has even been investigated by the CIA, who concluded this was just a hobby, and not a threat to U.S. security.

Gaddafi, who was killed in Libya on Oct. 20, was “a good pen pal," said Schlamowitz. “He didn't have to reply back to me, but he did."

FROM UZIS TO SUSHI?

Old soldiers never die … they make sushi! Or that’s the plan according to the Israeli Defense Ministry, the Industry, Trade and Labor Ministry and the Gross Foundation, which provides scholarships for discharged soldiers.

Retiring soldiers will be trained as sushi chefs courtesy of the government. The idea is for Israelis to replace Asians now “sushi-zing” in Israel. "There is a lack of Israeli workers in this area, and that is why we are building a program that allows them to learn, get a job, and has lots of 'treats' for those taking the course," said a Ministry official.

Along with cooking courses, some ex-soldiers may receive housing and living expenses for a few months. Graduates, who will be placed all over the country, will receive a large grant if they “roll” into the industry, classified as “priority work.”

Although when we think sushi, Jews doesn’t jump to mind, Kosher sushi is gaining popularity. So next time you dip your sushi in a little soya sauce, make a bracha and say l’chaim!

As my dear readers know, I’ve written on “Names” as they are fascinating! In an earlier WJB, I reported that an Israeli couple, inspired by Facebook, named their child “Like”

Well, they may have to “Like” something else. A new law proposed by MK Zvulun Orlev (Bayit Yehudi), chairman of the Knesset Children's Rights Committee, would prevent parents from giving their children “weird” or strange names that would “hurt their welfare or their feelings.”

The law states that “a person's name has an important influence on how society and those around him look at him … Judaism places great importance on a person's name.”

Israel is not alone. Sweden, Portugal, Norway, and Peru, to name a few, had laws preventing parents from giving their children “negative/difficult” names.

So, the question remains, does this law strip mamas and papas of their rights or is it fair child protection from future torture, courtesy of their parents’ egos and meshugas?

You be the judge!

Joseph Aaron of the Chicago Jewish News reports the death of Yitta Schwartz, 94, a survivor of the Bergen Belsen concentration camp. Yitta Schwartz never gave up, and embraced her Judaism. She and her husband had 17 children, 170 grandchildren. When she died, she left behind 2,500 Jewish descendants because she “believed that whatever her past, her future could be bright.” Bright indeed. Thank you Yitta.

The Office: The Lost Purim Episode
The Blue Beyond
Great Place to Live
Is Eating Supposed To Be Spiritual?
Comments
MOST POPULAR IN Jewlarious
Our privacy policy