The Sadness behind the Laughter 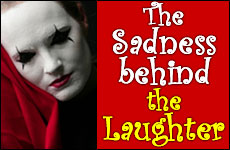 A man goes to see his psychiatrist because he's horribly depressed. He's tried everything -- therapy, medication, but nothing works. "You know what," his psychiatrist says, "go to the circus. There's a clown there that makes everyone laugh. He'll make you feel better."

A few weeks pass, and the man is still depressed.

"Didn't you go watch the clown?" the psychiatrist asks.

"You really should. That clown is some sort of miracle worker."

Many comedians live a certain dichotomy. On the outside, they are funny, gregarious and happy -- consummate performers. But on the inside some of them live with a certain sadness. It weighs on them constantly, departing only temporarily, when they are onstage making audiences laugh. Shecky Green is that comedian.

Green's journey to stand up comedy was an unlikely one. Upon being discharged from the Navy in 1944 after completing a 3 year tour of duty, Shecky enrolled in Wright Junior College in Chicago and planned to become a gym teacher. That summer, he took a job at a resort near Milwaukee called Oakton Manor, where he met and started performing with Sammy Shore (years later Shore went on to open the highly successful Comedy Store in Los Angeles).

Bitten by the comedy bug, Shecky started performing stand up at a club in New Orleans. A two-week contract turned into three years, which turned into an invitation to play the famed Chez Paree in Chicago. Soon after, the Nevada hotels and casinos came knocking, looking for acts to fill their rapidly expanding entertainment destination. Skecky moved out west and never looked back.

"The only time when Sid Caesar and I could really talk to each other was when we were doing Russian accents."

He's won numerous awards for his act, and was a staple of the Las Vegas strip for years. He was even credited by some for "saving" the Tropicana hotel from bankruptcy when he agreed to perform nightly while they had no other entertainment. It's been quite a ride for Shecky Green, although as he freely admitted in his interview with Jewlarious, it hasn't been all laughs.

"I suffer from severe depression," Shecky relates. "I always have. I come from a family of all depressed people. When we used to get together for a Shabbos dinner, we didn't talk. We just sat and stared at the floor. We had the best shined shoes in the world because that's all we looked at."

Shecky, who had an ear for dialects and loved to perform, started inventing characters to portray, perhaps as a way to avoid being himself. "I lived in characters. I didn't even know who I was. And the funny thing was, I wasn't alone. The only time when Sid Caesar and I could really talk to each other was when we were doing Russian accents."

It's strange to think that someone who makes his living making other people laugh is so sad himself, but in Shecky's case, it's true. "People never knew that I was depressed, and living in total fear, but I was."

It was only recently that Shecky began to deal with the sadness that he has dealt with throughout the years. "I am working with a doctor right now from Columbia. I thought I only had depression, but she tells me I'm bipolar, norpolar, southpolar and westpolar." Shecky adds, "Working with this doctor, along with taking the medication she has prescribed for me has brought me out of the darkness a little bit."

Before he started seeing a doctor, Shecky ascribed to the theory that laughter was the best medicine. "My audience is my psychiatrist. For example, I talk about my divorce in my act. I'm thinking about going back to my first wife -- because she's is a wealthy woman."

"Being Jewish is where my humor comes from."

Shecky also has some choice words for the people behind the recent rise in anti-Semitism and anti-Israel rhetoric in Britain. "The English have always been anti-Semitic, they've just been hiding it for a while. They could have saved a lot of Jews during World War II, but they turned them away...the English should just worry about getting better food in their restaurants and stop worrying about Israel and the Jews."

Although he can get serious when talking about the state of the Jewish people, at the end of the day, what Shecky Green enjoys most is making people laugh. Like the circus clown who can cheer up almost anyone, Shecky's brand of humor has been delighting audiences for over 50 years. And finally, Shecky Green is starting to get into the act himself. "I am 81 years old, and I am the happiest that I have ever been."

The Matisyahu of Stand Up Comedy
BBQ Bourbon Cheese Kugel Recipe
Korach 5782: Visit to Lift the Spirit
That Time The Ivy League Found A Way To Limit Jewish Enrollment
Comments
MOST POPULAR IN Jewlarious
Our privacy policy