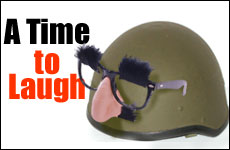 Why now is the best time to launch Jewlarious.com -- a new site dedicated to Jewish humor.

The congregants were shocked when they entered the rabbi's study only to see him watching Al-Jazeera, the Arab satellite news station. "Rabbi," said the shul president. "How can you be watching such anti-Semitic propaganda? Are you, God forbid, some sort of a self-hating Jew?"

"On the contrary," the Rabbi replied. "When I read the New York Times, I see such terrible things: that Israel is branded as the ‘aggressor' despite the fact that it is defending itself against terrorists, that rockets are raining down on Israeli cities, and now the violence has spread to Jews around the word -- such tzuras. But when I watch Al-Jazeera, I see so much more: that the Jews control the American government, the banks, the media, and that we're even on the verge of taking over the entire world. Watching Al-Jazeera makes me feel a whole lot better!"

One of the reasons why this joke is amusing is that it takes our current situation, one which is tragic and at times seemingly hopeless, and turns it on its head by suggesting that our enemies are not that menacing at all. In fact, they are actually helping us -- and that makes it funny.

In a sense, this is much like the history of the Jewish People itself. For thousands of years we have been struggling through trying times, but we always manage to keep things in perspective by turning our perception of reality on its head to see what truly lies beneath. One of the ways we have always done this is by using one of our gifts: our sense of humor.

We Jews are known for our sense of humor, and this goes way back -- all the way to the times of the Bible. The first recorded laughter in Jewish tradition results from tragic circumstances -- the inability of our patriarch Abraham and matriarch Sarah to have children. But when the angels tell Sarah that at the age of 90 she will miraculously give birth, she laughs. A situation which was seemingly hopeless -- infertility -- has now been transformed into the miraculous -- a 90 year old woman and a 100 year old man becoming new parents. Now that's funny.

Jewish humor through the ages has helped us deal with situations that seemed unbearable.

Jewish humor through the ages has helped us deal with situations that seemed unbearable. During the days of oppression and poverty of the Russian shtetls, one village had a rumor going around: a Christian girl was found murdered near their village. Fearing a pogrom, they gathered at the local synagogue. Suddenly, the rabbi came running up, and cried, "Wonderful news! The murdered girl was Jewish!"

To the untrained eye, a joke like this might even seem a bit morbid, but those who know the history of the Jewish people know that that couldn't be further from the truth. After all, we Jews have a long history of making light of the predicaments that we find ourselves in. Because if you can make light of your struggles, you can deflate them and make them much easier to handle.

Case in point: a segment of the Israeli satirical television program called Eretz Nehederet (A Wonderful Country) that was aired during the current conflict in Lebanon. The opening scene shows a hospital room with a heavyset, gray haired man in a coma. A television beside his bed displays scenes of the fighting in Lebanon, and suddenly, his eyes open wide and he declares, "What a bad dream I had." He continues, "Get me [Former Prime Minister] Begin on the phone immediately!" It is obviously Ariel Sharon, thinking he has awoken from his coma and returned to the Lebanese conflict of 1982.

The show continues to lampoon everyone possible during the current conflict. Even Israeli singer David Broza, who has been playing his guitar in bomb shelters throughout northern Israel to raise spirits, is a target. But in the Eretz Nehederet version, he is driving people out of their bomb shelters into the streets where they prefer taking the risk of getting hit by a Katyusha rocket than remaining to listen to his performance.

Some might claim that a show like this is insensitive, or even destructive to the Israeli national psyche. But perhaps it is the exact opposite. When someone thinks his world is literally crashing down around him, he might think to himself that there is no way he will be able to survive. Laughter shows the absurdity of the situation and helps one pull through.

Likewise, some might claim that now is not the right time to launch Jewlarious.com -- a website dedicated to Jewish humor. But it is times like these when we need our sense of humor most! The current situation can appear hopeless. But we Jews have been enduring hopeless times for thousands of years, yet remarkably, we continue to survive, and perhaps even more remarkably, have managed to keep our sense of humor through it all.

Some have wondered what the secret is to our survival. Perhaps a small part is owed to our sense of humor. Our ability to make light of difficult situations, to see beyond today and know that there will be a better tomorrow. That no matter how unbearable our current state is, we will get through it somehow, and survive. In this spirit, Jewlarious.com is being launched, and we hope we are playing our small part by reminding the world of the Jewish people's secret weapon: our sense of humor.

The Sights and Sounds of Kosherfest
It Takes A Lot Of Faith To Be An Atheist
How Instagram Brought Back This Nostalgic Soup
What Makes Eli Run?
Comments
MOST POPULAR IN Jewlarious
Our privacy policy