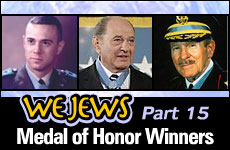 Profiles of some of the many Jewish Medal of Honor recipients.

Over the years, despite statistics to the contrary, there is often the perception that We Jews are under-represented in the military. Sadly, some Jews in the military, past and present, have chosen to designate themselves as “unaffiliated” given concern over anti-Semitism on the part of enemies and even colleagues.

Jews have served with distinction in the United States military.

Yet, the facts are that Jews have served with distinction in the United States military: In WWI, for example, 250,000 Jews served with over 3,000 killed, and another 12,000 were gassed or wounded. We comprised 5.73% of the military when we totaled only 3.27% of the general U.S. population (half of whom were women).

In honor of Memorial Day, we look at a few of that rarefied group: Medal of Honor winners who were Jewish. The award, the highest for U.S. military service, was created during the Civil War. Post-Civil War standards are stringent. Recipients must distinguish themselves at the risk of their own life above and beyond the call of duty. The medal is presented by the President on behalf of Congress.

Thus far there have been 3,473 recipients. At least 29 Jews have been so honored from the Civil War through the Vietnam War. Some received the honor posthumously.

While sources vary, as many as seven recipients were Jewish. A few include:

*Army Sergeant Major, Abraham Cohn during the Battle of the Wilderness and Battle of the Crater, Virginia, May 6, 1864 and July 30, 1864: rallied and formed disorganized and fleeing troops of different regiments. At Petersburg, Virginia, bravely and coolly carried orders to the advanced line under severe fire.

*Army Sergeant, Henry Heller during the Battle of Chancellorsville, Virginia, May 2, 1863: One of a party of four who, under heavy fire, voluntarily brought into the Union lines a wounded Confederate officer who provided valuable information concerning the position of the enemy.

*Army Sergeant Leopold Karpeles during the Battle of the Wilderness, Virginia, May 6, 1864: While color bearer, rallied the retreating troops and induced them to check the enemy's advance.

Four recipients were Jewish. The first was Simon Suhler a.k.a. Charles Gardner honored for extraordinary bravery.

*Army Sergeant George Geiger during the Battle of the Little Big Horn, Montana, June 25, 1876 : With three comrades courageously held a position that secured water for the command.

*Army First Sergeant Jacob Trautman during the Wounded Knee Massacre, South Dakota, December 29, 1890: Killed a hostile enemy at close quarters, and, although entitled to retirement from service, remained with the campaign till its end.

*Marine Corps Private Samuel Gross a.k.a. Marguiles at Fort Riviere, Haiti, November 17, 1915: The second man to pass through the breach in the fort's walls despite constant fire from the Cacos, then engaged the enemy in desperate hand-to-hand combat.

Of the 124 Medals awarded, seven were to Jews. William Sawelson, received it posthumously, as he was killed by a machine gun while trying to assist an injured soldier.

*Navy Lieutenant Commander Edouard Izac aboard German submarine U-90 as prisoner of war, October 8, 1918: Captured after the ship he was on was sunk, gathered information about German submarine movements and risked his life to escape and provide it to the allies.

During World War II more than 650,000 Jewish men and women served. Approximately 60,000 Jews received medals, including five Medals of Honor. Three, Isadore S. Jachman, Ben L. Salomon and Raymond Zussman received it posthumously. Jachman and Salomon were killed helping injured soldiers; Zussman risked his life on September 12, 1944, by leading his tank against the enemy, capturing 30 prisoners. He was killed less than a month later -- before receiving the Medal.

*Navy Lieutenant Commander Samuel G. Fuqua, Pearl Harbor, December 7, 1941: Aboard the USS Arizona during the Attack on Pearl Harbor, directed the crew to resist, fight fires, then evacuate the injured. When the ship couldn’t be saved and all possible crew was rescued, he ordered the ship abandoned and remained on deck until the last of the crew had been evacuated.

Although more than 150, 000 Jews served in Korea, not one received the Medal of Honor! Yet, on July 23, 1950, Tibor Rubin, a rifleman in Korea, stayed behind to keep the road open for his withdrawing unit, single-handedly fighting North Korean troops, and capturing prisoners. A few months later, Chinese forces assaulted his unit and once again, Rubin, manning a machine gun, allowed the unit to retreat southward. Severely injured and captured, he snuck out at night to get food and medical supplies for other wounded prisoners.

In a 1993 study commissioned by the Army to investigate racial discrimination in the awarding of medals, it was determined that Tibor Rubin, Holocaust survivor, and Korean War hero, had been denied the Medal because of religion. In 2005, President George W. Bush presented the Medal of Honor to Rubin in a ceremony at the White House for his actions in 1950 during the Korean War -- 55 years later!

Today, the percentages of Jews in the military has decreased somewhat, yet, 44 Jewish servicemen and women died in the wars in Iraq and Afghanistan. About a third did not register as Jews and their religion became generally known only after their deaths, suggesting that there may be many more Jews in the military than assumed.

The truth: Over the years, Jewish representation in the military has frequently equaled or surpassed the Jewish population of the United States and We Jews have served with honor and courage.

Why Are Jews Funny?
Lessons from the Book of Jonah
Where Are We? The Body, Brain, Soul Problem
Dr. Sheila Nazarian’s Escape from Iran
Comments
MOST POPULAR IN Jewlarious
Our privacy policy
Aish.com Is Looking for Great Writers