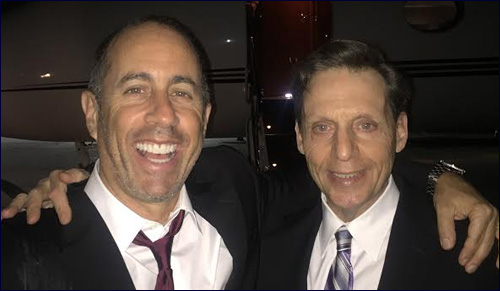 In December, Jerry Seinfeld and I are doing stand-up comedy in Israel. Not even terrorism can stop the laughter.

On Dec 19 and 20th, Jerry Seinfeld and I will be performing stand-up comedy at The Menora Mivtachim Arena in Tel Aviv. I have not been this excited about doing a gig in years. Jerry and I had talked about going to Israel to perform and thank God (BH), it’s now happening. 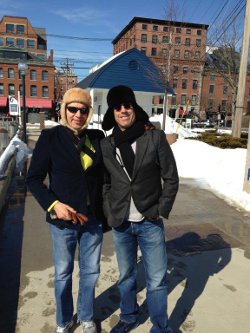 Jerry and I have been touring together for over a decade. Touring with Jerry is a total first-class experience. Like this trip to Israel, we travel in a private jet. That’s a lot better than an El Al flight where every ten minutes people wake you up to join a minyan or some religious woman with 14 kids wants you to hold the triplets while she tries to get the other 11 out of the bathroom. Also, we stay in the best hotels and we laugh more in a day than most people laugh in a year. Plus the people that come to see Jerry’s shows are by far, the best audiences on the planet. And I expect Israel to be that and more.

The people in Israel are more than just an audience. They are my brothers and sisters.

For me, performing in Israel is a different experience than performing anywhere else in the world. The people in Israel are more than just an audience. They are my brothers and sisters. They are modern day heroes. And now more than ever is a perfect time for Jerry and I or anyone else to go and show support for the people that live there.

People ask me “aren’t you scared to go to Israel with all that’s going on now?” Not really. My job calls for me to go wherever people want and need to laugh. Bob Hope taught us all about that. Israel is under immense pressure on almost every level. Just having a Jewish mother is enough pressure for anyone. Now add to it all their other meshugas and your head could pop off.

I love Israel and I love the Jewish people. In stand-up comedy, Jews have always been the majority. They have set the standard for the art form. And have raised the bar pretty darn high. A question that comes up a lot is “what keeps the Jewish people going? How have they survived when in every generation someone or some group is trying to wipe them out?” One answer might be laughter. Jews love to laugh. Jews like to tell funny stories. Jews don’t mind jokes at their own expense. In a rabbi, a priest and a minister joke, the rabbi is almost always the fall guy. And no one laughs harder than the rabbis.

So on Dec 19th and 20th, two Jews will walk into the Menora Mivtachim Arena and tell some funny stories to the great people of Israel who will listen and laugh. You know what? Not even terrorism can stop the laughter.

The Office: The Lost Purim Episode

I Was a Soupy Groupie
Where Do the Laws of Nature Come From?
Saadiah Gaon, Rashi and Maimonides: How Three Rabbis Revolutionized Judaism
King Sennacherib and the Siege of Lachish
Comments