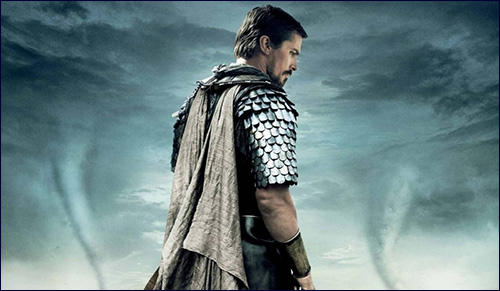 Why the new film is a disgrace.

According to Hollywood insiders, this year has been unofficially designated as “The Year of the Bible.” As 2014 comes to a close, Ridley Scott’s just released blockbuster Exodus: Gods and Kings is just the latest in a series of major movies based on biblical themes to make their appearance these past twelve months.

In February, 20th Century Fox made the first move with a Christian biopic based on the history Channel’s hit 2013 miniseries The Bible – a hugely successful miniseries which racked up about 100 million cumulative viewers over a six-week period, making it the third most-watched cable series of 2013. Paramount followed soon after in March with Noah, Darren Aronofsky’s reimagining of the biblical story of the flood and its survivors. April brought us Heaven Is For Real, Sony’s movie based on the best-selling book that purports to tell a young boy’s after death experience meetings with God and biblical heroes. Now, just in time to be considered for Oscars, comes Exodus: Gods and Kings, hoping to capture the huge interfaith market for whom the Bible is sacred.

What explains this sudden revival of Hollywood’s interest in the Holy Book? No, Hollywood hasn’t suddenly become transformed into a religious mecca. There’s a simple reason why the Bible today is almost as “cool” as Kim Kardashian. It’s the same reason that Willie Sutton famously gave when he was asked by an FBI agent why he chose to rob banks. “Because,” he explained with succinct honesty, “that’s where the money is.”

The Bible is the best-selling book of the year, every single year.

Here’s the result of a remarkable study. How many of the top 15 highest-U.S.-grossing movies of all time, adjusted for inflation, star comic-book characters? None. How many are based on the Bible? Two: The Ten Commandments and Ben Hur.

And that is why what Hollywood has all too often done with biblical themes – and is most explicitly guilty of in its latest exploitation of the Bible in the film Exodus – is beyond inexcusable. It is nothing less than profaning the sacred and making a mockery of the holy.

According to a 2014 poll of 1,200 adults nationwide, 79 percent of Christians say that accuracy is important to their ticket-buying decisions when it comes to movies dealing with questions of religion. While Jews weren’t part of the poll, I would imagine that these numbers would be at least the same. Simply put, moviegoers want a biblical film that sticks to the text and gets at least most of the facts right. Watching it could strengthen their faith and add a visual component to their reverence for the text. More, parents could feel good about having their children see a faithful depiction of stories that form the basis of their life’s values and moral judgments.

So let’s get to Exodus, the movie. Moses, the man we’ve always thought of as the hero in the biblical story of the redemption of the Israelites from the slavery of Egypt, is played by Christian Bale. (I’ll say nothing about the irony that only Hollywood could have turned a Christian into the greatest Jew of history.) In analyzing his role, the Hollywood Reporter quoted Bale as calling his character “schizophrenic” and “barbaric” during a press interview. Based on the script’s development of Moses’s leadership, Bale concluded that “I think the man was one of the most barbaric individuals that I ever read about in my life.”

And that’s just for starters. Wait till you see the first 20 minutes of the film – Moses the warrior in Pharaoh’s army and his aide-de-camp; Moses the big- shot in Pharaoh’s cabinet; Moses in a Cain and Abel relationship with another of Pharaoh’s sons; in short, Moses the cartoon figure of the directors imagination – a director who has no qualms whatsoever in substituting Hollywood fantasy for holy book facts.

How about the miracles, though? Those who remember how Cecil B. DeMille, in an age before the amazing effects produced by digital photography were possible, managed to leave us with the powerful imagery of the splitting of the sea and the drowning of the Egyptians will be gravely disappointed to discover that this wasn’t really a miracle after all. According to Ridley Scott, the parting of the Red Sea wasn’t achieved by the hand of God but just the coincidental result of an earthquake whose timing proved exceedingly fortunate for the fleeing Israelis. And of course the plagues which preceded the Israelites departure were all similarly comprehensible as products of natural phenomena.

God is portrayed as a petulant, temperamental and impatient preteen boy.

But that still is not the worst of it. What is sure to inflame many audiences, even those willing to forgive parading fiction as fact, is the incredible decision to portray God as a preteen boy, played with the voice of eleven-year-old British actor Isaac Andrews as a petulant, temperamental and impatient deity. Representatives for the marketing firm, Faith-Driven Consumer, felt that “The portrayal of God as a willful, angry and petulant child in Exodus will be a deal breaker for most people of faith around the world.”

The film deserves to have it prefaced with a bold warning that “Any resemblance between this and the book suggested by its title is purely accidental – and improper.” But if the producers were honest they wouldn’t get the benefit of the built-in audience thirsting for Divine wisdom.

I couldn’t help thinking of the classic story about a boy coming home from Hebrew school and Grandpa asked him "What did you learn about today?"

"Well," he said, "teacher told us about Moses and the Children of Israel and the Red Sea!"

"What about them?" Grandpa wanted to know.

"You see, gramps – – the Jews were slaves in Egypt for a long time when Moses came along and organized them. They had sit down strikes and demonstrations. To make it short, they made so much trouble for Pharaoh that he finally gave up and let them go. They got as far as the Red Sea and pitched camp to rest. Moses sent up some of his reconnaissance planes – – he didn't trust Pharaoh. Sure 'nough they spotted Pharaoh's army. The pilots judged that there were about 600 tanks with high powered rifles, backed up by a large number of half tracks, artillery and infantry. All of this was reported to Moses immediately. He ordered his engineers to throw a pontoon bridge across the Red Sea. He set up road blocks to slow down the tanks and armed a rear guard with bazookas to hold up Pharaoh's forces as long as possible. When the Jews were all on the other side and the Egyptians were half way across the bridge, Moses ordered his demolition squad to dynamite it. The Egyptians and their tanks were drowned in the waters and the Jews were saved."

"Oh come on, Abie, is that what your teacher told you?" Grandpa protested in amazement.

"No..." Abie replied, "but Grandpa, if I told you what the teacher really told us – – you'd never believe it!"

And that’s how Hollywood thinks it needs to handle the Exodus.

A recent Gallup poll reveals that three quarters of the American population believes that the Bible is the word of God. To sell Exodus the movie as an incarnation of that book is a lie that needs to be severely disowned. The conclusion is clear: Exodus the book is holy; Exodus the movie is Hollywood looking for a way to make a bigger buck by masquerading its inanities as sacred.

The Matrix Resurrected: A Philosophical Examination
Korach 5782: Visit to Lift the Spirit
That Time The Ivy League Found A Way To Limit Jewish Enrollment
Would You Rather Be Right or Happy?
Comments
MOST POPULAR IN Jewlarious
Our privacy policy