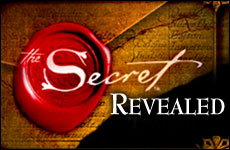 God as a cosmic bellhop.

Rhonda Byrne, the Australian producer-turned spiritual entrepreneur behind the bestselling sensation, The Secret, certainly understands the secret of marketing. She has turned a simple idea into a New Age film and book that have catapulted into the glorified stratosphere of #1 ranking on Amazon and the New York Times Best Seller list.

With hundreds of "Secret" support groups sprung up round the world and the imprimatur of not one but two Oprah specials dedicated to discussing its "breakthrough" concept, we surely have to wonder if this is indeed the dawn of an unparalleled spiritual awakening.

Byrne claims what she preaches was inspired by the Bible. Her former partner, Esther Hicks, who argues that she is the one who first popularized the concept, gives seminars in which she summons the other-worldly spirit of Abraham to speak through her and counsel her rapt, capacity-filled audiences with the teachings of The Secret.

The secret in a nut shell: People can get all the things they want simply by thinking positively about them.

If you're one of the few who haven't yet spent your money to help Rhonda Byrne fulfill her financial fantasies, allow me to present, for free, the secret in a nut shell: People can get all the things they want simply by thinking positively about them. You see, as she profoundly explains, "When you think about something, you become a magnet for what you want." This is "the law of attraction."

The idea, she contends, is at least 3,500 years old and the key to most major religions. Think of it, she says, as "spiritual truth" and "the wisdom of the ages." And apply it to everything. Need a parking spot? Concentrate hard and really believe it will be there for you. Didn't happen? Oops... guess you didn't really believe it enough. Well then give it more time. Practice till you get it right. Start small.

As Byrne, at her best, writes: "Everyone has to have their own experience to believe it. People should start with little things, like deciding that a cup of coffee will come to you or that you will see a feather." When you wish upon a star, makes no difference who you are -- and in the Byrne version you don't even need the star!

I can't help but admire the marketing genius that has repackaged the old "think and get rich" philosophy which was the staple of self-help advisors for centuries in a way that makes us believe it offers insights never previously published. I'm also highly impressed by the chutzpah that isn't embarrassed to utter modern psycho-babble promising greater gifts than a mythical genie as reward for nothing more than unconditional wishes.

What troubles me, though, is what this incredible hoopla over a publishing craze tells us about contemporary spiritual naivete. Are people really that gullible -- or simply that ignorant?

Let's make clear at the outset that The Secret could never have found the slightest acceptance if it weren't based on a measure of truth. A lie needs at least a little legitimacy to gain credibility. But, as George Christoph Lichtenberg so powerfully put it, "The most dangerous untruths are truths moderately distorted."

Thinking positively is always the first step to success. Should we ardently wish for things that we want? Of course! Hope fills us with conviction that our dreams are attainable. Desire serves as spur to our initiative. If it is not a magnet, it is at the least a supreme motivator. We should believe in the possibility of acquiring our heart's desires. But that's far from saying that there is a universal and unequivocal law that turns every one of our wishes into God's command.

Judaism always understood that the answer to some of our most profound desires may still be "No." Not every wish deserves to be granted. And even more to the point, not every wish ought to be fulfilled. George Bernard Shaw understood it when he pointed out that "There are two great tragedies in life. One is not having your prayers answered; the other very often is the reverse." Jewish prayer asks of God, "And fulfill the requests of our heart for good" -- only if what we ask for is truly in our best interest from the Divine perspective.

Should every person's dream for millions really come true? Is the "law of attraction" so automatic -- in Byrne's words as irrefutable as the law of gravity -- that any one who truly desires wealth, fame or power must have the universe grant these to them no matter what the consequences?

Our tradition teaches us that God is kinder than to unquestioningly saddle us with all the penalties that we cannot possibly anticipate accruing from the realization of all of our daydreams. How sad if every teenager's fantasy to lead the life of Paris Hilton would have to become reality because of the magnetic power of undisciplined desire.

Thankfully, the Divine plan allows for rejection of ignoble thoughts; the world doesn't respond to our greed as much as it does to our need.

The Secret simply doesn't work -- and for very good reason. God wasn't foolish enough to create a world blindly responsive to human cravings. Our wishes and our best interest are very often far apart, and God is much more concerned with taking care of the latter than responding to the former.

The danger of Byrne's philosophy goes far beyond offering people a false panacea.

So The Secret is a failure first as a practical matter. But the danger of Byrne's philosophy goes far beyond offering people a false panacea. We ought to worry not so much for those who find out that "the law of attraction" doesn't really attract but for those who end up being held responsible for misfortunes for which they were totally blameless.

Since with positive thought you can create your perfect reality, those who suffer must be guilty of "negative thinking" that allows bad things to happen to them. That means those who experience widespread calamity, tsunamis, hurricanes, earthquakes, famine, and even diseases like AIDS, experience them because they are, in Byrne's words, "vibrating in exact alignment with these disasters, such as thinking they could be in the wrong place at the wrong time."

Which of course makes them at least partially guilty themselves for the fate that befell them. How far is this incredible theology taken? Byrne strongly implies that the 3,000 people who died in the 9/11 attacks were victims of their own dark thoughts!

Whatever comfort might come to those who buy into The Secret's promise of making all the world's gifts readily accessible may well be outweighed by the guilt placed upon all those made to feel that their suffering is really all their own fault.

People can die for many reasons. We may not understand the why, but as believers we accept it as Divine decree. From a Jewish perspective, death is God calling a soul home because it has ended its mission on earth. For Byrne, death is a criminal choice by those who could have used The Secret to prevent it.

Forgive me therefore if I seem harsh in my judgment of a book that would appear to come bearing only a positive message. If only that were its point -- that we ought to try a little harder and we might find our efforts blessed -- I would embrace it warmly. But when it suggests that God is a cosmic bellhop just waiting to grant every one of our wishes if we only believe strongly enough that He'll do it, that offends not only my intelligence but also my faith.

There are indeed secrets out there to discover. I don't know from where in the Bible Byrne draws her conclusions, but I do know what King David tells us as the final word on the subject in his incomparable Book of Psalms: "The secrets of God belong to those who revere Him." Happiness is the reward for those who choose to follow the ways of God.