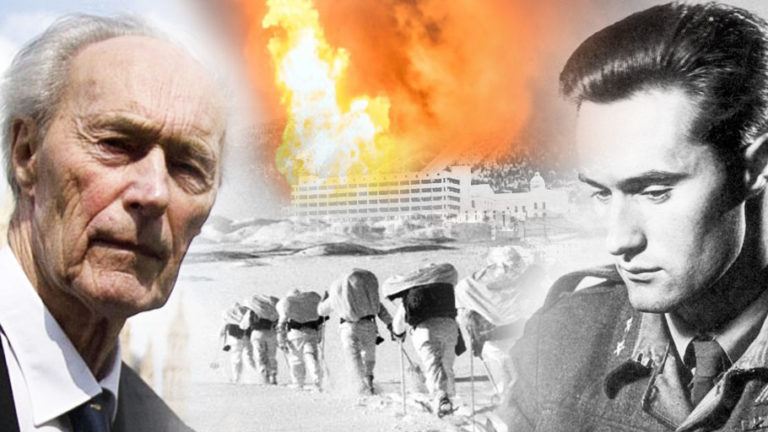 The daring raid on the Nazis’ secret nuclear facility in Norway.

It was one of them most daring raids of World War II. As Hitler raced to build the ultimate weapon, an atomic bomb, Allied efforts to thwart his plans were unsuccessful. A raid on the Nazi’s nuclear factory failed spectacularly in 1942 with the loss of 35 men. Terrified that Hitler would succeed in building a bomb, Churchill ordered one final, daring attack.

The odds were impossibly long. The Nazis’ secret nuclear facility was hidden on a remote mountain in Telemark, a region in southeastern Norway. The former fertilizer plant was producing heavy water, or deuterium oxide, a critical component of nuclear weapons. The only current map of the facility was an aerial photo taken at a height of 4,000 meters. It showed an impassable gorge and river blocking access to the plant. The access road was a single suspension bridge that was heavily guarded. Snow and ice blanketed the area and the raid was scheduled to take place in the depths of winter. 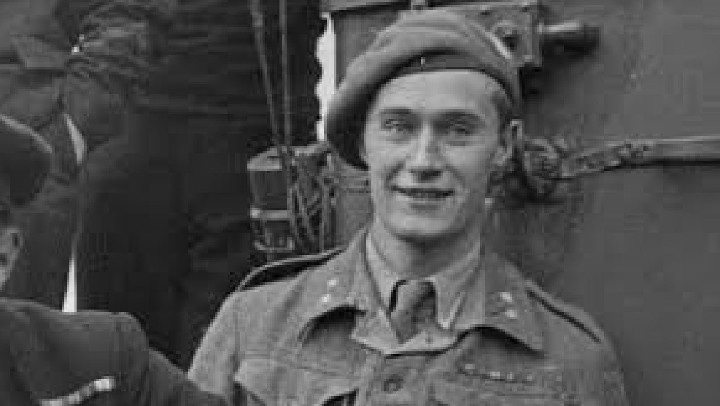 Lt. Joachim Ronnenberg, 23, was chosen as the team leader. Just a few years earlier, he’d been living with his parents in his hometown of Alesund, working as a fisherman. While many of his fellow Norwegians collaborated with their Nazi rulers, Joachim and a group of friends decided to take a stand, slipping out of Norway one night on a fishing boat headed to Scotland. Joachim later described leaving Norway to report for duty as the most important decision he made during the war. Once in Britain, he contacted the Special Operations Executive (SOE), a secret organization Churchill had established to coordinate sabotage missions behind enemy lines.

In 1942, Joachim was asked to choose a team of men to plan and carry out an assault on the plant. They would be completely alone. No air strikes would back them up, as the heavy water was being made in a basement workshop that was fortified against bombs. No Allied forces would be available to aid the commandos overland either; the nearest troops were hundreds of miles away. Joachim and his team of 11 men spent months planning and training.

On a rare day off, Joachim decided to go to the movies and for a drink in Cambridge. As he wandered around town, Joachim went into a hardware store and impulsively bought a pair of heavy duty metal cutters. It was those cutters which allowed Joachim to open the heavy lock on the plant’s side gate, once the group realized that the saw given to them by their British trainers would have been too slow and too loud to use without alerting Nazi guards. 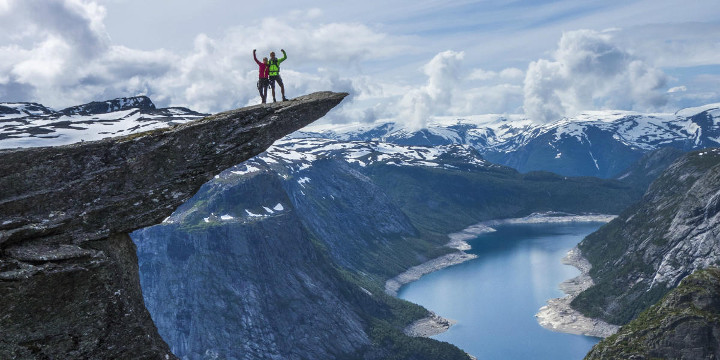 In October 1942, the first half of the group parachuted into Nazi-occupied Norway, landing on the remote Hardangervidda Mountain Plateau, about 40 miles from Telemark and the heavy water enrichment facility. They survived for months, eating Arctic moss and the meat and stomach contents of reindeer. In February 1943, a second group, including Joachim, landed. They parachuted into the the worst blizzard they’d ever seen, an indication of how difficult it would be to cross Norway’s rugged countryside and reach the remote nuclear plant. 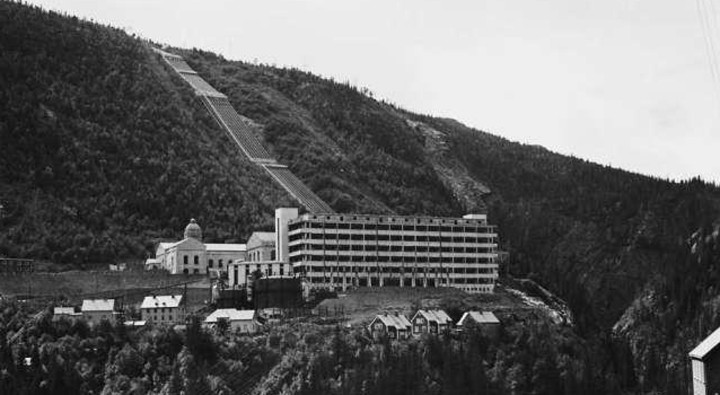 The heavy water plant (the front building) in 1935

The teams met up, full of determination despite the nearly impossible conditions. They each carried a cyanide pill to swallow in case they were captured. The team skied to Telemark, avoiding the roads, and traveled only at night. They finally reached the plant on the night of February 27, 1943, and realized anew how difficult their mission would be. 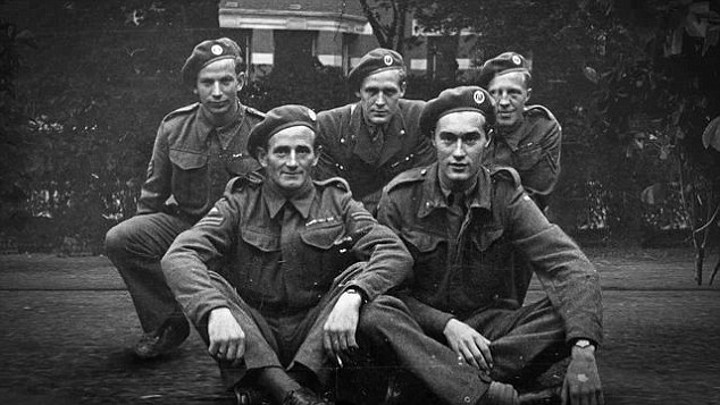 Steep mountainsides rose starkly up 1,000 feet from the Mana River. The plant was located on a shallow plateau midway up the far slope. The only way into the front of the plant was along a narrow suspension bridge that was heavily guarded. The back entrance was blocked by a wire fence with railroad tracks and German barracks nearby. Nazi guards patrolled the area. Joachim later recalled that many of his team “often thought that this was a one way trip” and they would never be able to destroy the nuclear facility, let alone escape afterwards.

The small group of commandos watched the guards movements. “There was no plan” for how to enter Joachim later explained. “We were just hoping for the best.” After observing the troop movements, they settled on trying to enter the plant via the rear. They waited until after midnight, then travelled 75 yards up the Mana River and, as quietly as they could, climbed down the steep snow-covered banks, clinging to wild bushes and shrubs to prevent themselves plunging into the icy water below.

When they reached the bottom, the men crossed the river on an ice bridge and began the slow ascent through waist-deep snow up the other side. There, the men walked to the base of the plant and split into groups. Joachim and three other commandos waited until the guards turned a corner on their rounds, then ran to the gate and cut the heavy padlock with the metal cutters he’d brought from Cambridge. Joachim and a second commando, Fredrik Kayser, split off from the others and entered a small ventilation duct in the wall. They squeezed into the tiny space, dragging backpacks filled with equipment behind them.

Once inside the building, Joachim and Fredrik followed the passageway into the very heart of the heavy water laboratory. They recognized the 18 steel cylinders in the factory as heavy water containers from their training back in England. The room was guarded by only one soldier. Pointing his gun, Joachim asked that the lone guard not make any noise, and succeeded in gaining his cooperation without firing a shot. 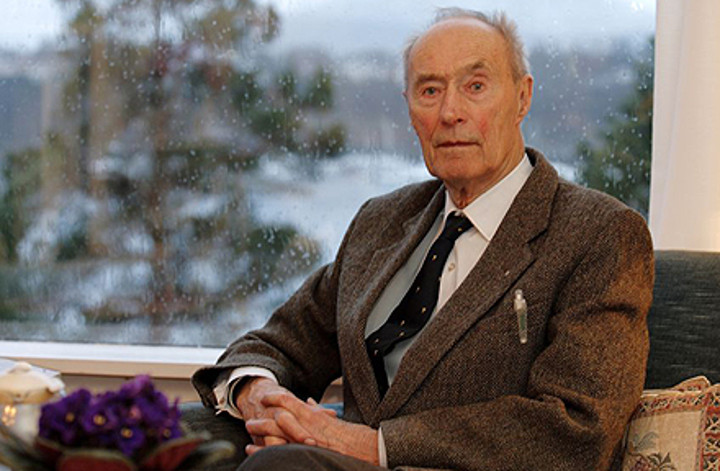 Working quickly, Joachim and Fredrik, then two other team members who’d broken a window to gain access to the plant, started attaching explosives to the heavy metal containers and other machinery. When the time came to set the fuses, Joachim made a split second decision. He’d been given long fuses by his handlers back in Britain. These would take two minutes to burn and were designed to give the team ample time to flee. Joachim cut the fuses so they’d detonate in just 30 seconds; he wanted to “be close enough to hear the bang” and “know we’d done our job”.

With only moments to spare, the commandos retraced their steps out of the plant and regrouped outside. They heard the explosions and ran away in time to evade the Nazi guards. As the commandos regrouped, they donned skis and began a desperate escape over Norway’s rugged mountains in the height of winter. 2,800 Nazi soldiers fanned out over the countryside looking for the saboteurs. They were never found. Joachim and his team skied 280 miles through mountains and forests to the Swedish border and safety.

Hitler tried to restart his nuclear program, but never succeeded. The Telemark plant was rebuilt but bombed by the Allies in an aerial raid in November 1943. Hitler ordered the nuclear program moved to Germany but resistance fighters sank the ferry carrying the equipment and the remains of heavy water supply. Germany never succeeded in creating a bomb. 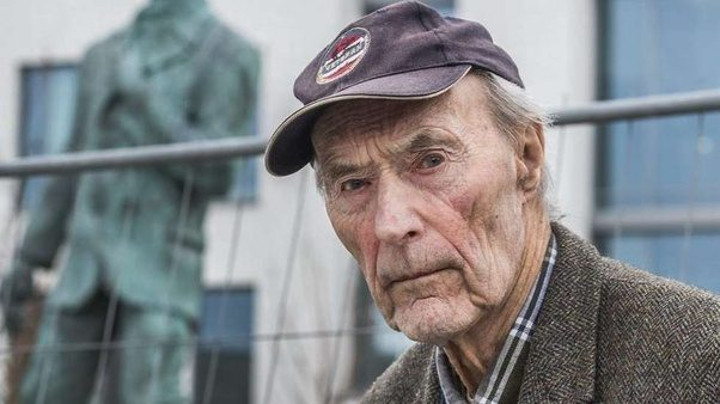 Joachim learned the importance of the plant he’d destroyed only after the war. He’d been told it was producing “heavy water”, but didn’t realize the significance of the term. “The first time I heard about atomic bombs and heavy water was after Americans dropped the bomb on Hiroshima and Nagasaki,” he later explained. At once, he realized that if his mission hadn’t succeeded, London might have been bombed by Germany and ended up “looking like Hiroshima”. SOE official historian Michael Foot explained the raid “changed the course of the war” and that the commandos who pulled it off deserved the “gratitude of humanity.”

After the war, Joachim returned to Alesund and pursued a career as a journalist and administrator with Norway’s public broadcasting company. For decades, he refused to talk about his daring 1943 raid, but that changed in the 1970s as he became worried that younger generations were forgetting the lessons of World War II. 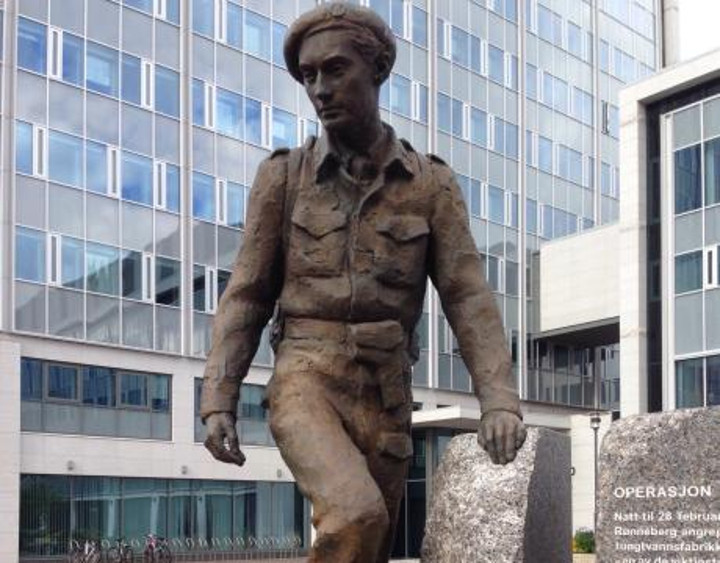 “There is a lot of talk about ‘never again,’” Joachim explained, “but this is impossible if we don’t remember what happened back then.” Joachim was horrified that many of the Norwegian scientists who worked on the Nazis’ nuclear project never faced charges for their actions and went on careers in Norsk Hydro, the prestigious company that had owned the plant and had cooperated openly with Hitler. Despite his speaking out, the scientists who collaborated on the project were never held accountable.

“It ought to be obvious to people that peace and freedom have to be fought for,” Joachim warned. “Politicians seem to have forgotten this.”

Joachim Ronnenberg was the last surviving member of the raid. He recently died at the age of 99 in Alesand, Norway.