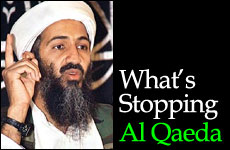 The secret of why Al Qaeda called off a plot to gas the New York City subways.

The FBI agent appearing as a guest on the radio show Savage Nation was claiming that Al Qaeda boasts 15,000 operatives in sleeper cells throughout the United States. And, he added, they have in their arsenal dirty bombs and atomic suitcase bombs.

The calls came in fast and furious:

I don't believe this. If Al Qaeda has infiltrated America, then why aren't they blowing up movie theaters and shopping malls every week? If they have the weapons, why don't they use them?

There can be no question that Al Qaeda has sleeper agents in the U.S. Consider: Ninety percent of the suicide bombers in Iraq are imported from around the world (including a Belgium-born Catholic woman who converted to Islam and was sent to Iraq to blow herself up). Of those murdered in Iraq, 98 percent are fellow Muslims. The eight suicide bombers in England were British born Muslims. The Wahabis are known to be recruiting in the United States. There are 12 million illegal immigrants the United States. Recently, 800 men -- from the Middle East, Arab countries and Afghanistan -- were caught illegally entering the U.S. from Mexico.

Yet since 9/11, Al Qaeda has perpetrated no terrorist activity in the United States. Why not?

Last month, Pulitzer Prize-winning author Ron Suskind, in a book The One Percent Doctrine, reported that Al-Qaeda terrorists came within 45 days of attacking the New York subway system with lethal gas. They were stopped -- not by any intelligence breakthrough, but by an order from Osama bin Laden's deputy, Ayman Zawahiri.

According to Time Magazine:

[The plot] contained plans for a gas-dispersal system dubbed "the mubtakkar" (Arabic for inventive). Fearing that al-Qaeda's engineers had achieved the holy grail of terror R&D -- a device to effectively distribute hydrogen-cyanide gas, which is deadly when inhaled -- the CIA immediately set about building a prototype based on the captured design, which comprised two separate chambers for sodium cyanide and a stable source of hydrogen, such as hydrochloric acid. A seal between the two could be broken by a remote trigger, producing the gas for dispersal.

The prototype confirmed their worst fears: "In the world of terrorist weaponry," writes Suskind, "this was the equivalent of splitting the atom. Obtain a few widely available chemicals, and you could construct it with a trip to Home Depot -- and then kill everyone in the store."

The device was shown to President Bush and Vice President Cheney... prompting the President to order that alerts be sent through all levels of the U.S. government. Easily constructed and concealed, the device ensured that mass casualties would be inevitable if it could be triggered in any enclosed public space.

Suskind writes about plans to attack the subways:

The cell members had traveled to New York City through North Africa in the fall of 2002 and had thoroughly cased the locations for the attacks. The device would be the mubtakkar. There would be several placed in subway cars and other strategic locations and activated remotely. This was well past conception and early planning. The group was operational. They were 45 days from zero hour.

Over the next days, teams of CIA briefers, analysts and operatives were in the Oval Office. The President and the Vice President sat in the two wing chairs, each with his back to the fireplace... The Vice President was intense. "The question is why would Zawahiri have called them off? What does it indicate about al-Qaeda's strategy?"...

Did al-Zawahiri call off the attack because the United States was putting too much pressure on the al-Qaeda organization? "Or is it because he didn't feel this was sufficient for a 'second wave'?" Cheney asked. "Is that why he called it off? Because it wasn't enough?"

The destruction tape -- still running, unexpressed, in everyone's head -- turned toward calculation. Ten subway cars at rush hour -- two hundred people in a car -- another thousand trampled in the underground in rush-hour panic as the gas spreads through the station. As many dead as 9/11, with a WMD attack spreading a devastating, airborne fear?

Not enough of a second wave?

"I mean, this is bad enough. What does calling this off say about what else they're planning?" Bush blurted out. His eyes were wide, fist clenched. "What could be the bigger operation Zawahiri didn't want to mess up?"

The CIA knew there were terrorists on American soil, plotting to commit an attack worse than 9-11.

Why would the terrorists call off their plan, just 45 days from zero hour?

Writing in The Sunday Telegraph (April 16, 2006), Amir Taheri, former Executive Editor of Kayhan, Iran's largest daily newspaper, explained that the current U.S. administration is the "problem." How so?

According to Hassan Abassi, the Iranian strategist known as the "Islamic Kissinger," it was a matter of being patient. Al-Qaeda called off the NYC subway attack because they don't want America to take off the gloves and really fight terror. The radicals are waiting to launch their next big strike at such time that America is more complacent and less confrontational.

Radical Islam has bigger plans in store that they don't want to mess up, and the timing was not right to face a harsh American response.

The radicals are confident, however, that the right time will come. Says Abassi: "The Americans are impatient. At the first sight of a setback, they run away. We, however, know how to be patient. We have been weaving carpets for thousands of years."

Around the world, Al-Qaeda has the manpower and resources to carry out unspeakable acts of terror. And there is no need to even import the terrorists. The London bombers were indigenous -- homegrown. And last month, 17 Al-Qaeda operatives were arrested in southern Ontario; they had ordered and received three tons of ammonium nitrate to attack Canadian targets. All the suspects were either born in Canada or were long-time residents.

It is clear that Al-Qaeda is planning to attack America again.

And this is where we err. We do not grasp the enormity of our enemy's objective. For every time there is a new attack -- New York, Washington, Istanbul, Bali, London and Madrid -- we pass it off as a mere spontaneous grievance.

And when there is a lull, we imagine that the terrorists have climbed back into their hole. We can't conceive that they're patiently holding back, out of strategy.

What is Al-Qaeda's strategy? They know that they cannot fight America face-to-face. So they figure that America -- as the war in Iraq drags -- is slowly losing its will to fight.

Radical Islam has made an outright declaration of war on Western civilization. Radical Islam has the goal of Islamic world domination, where the "infidel" (i.e. all non-Muslims) are neutered and submissive.

Al-Qaeda figures that in a few years time, they'll be in a better position to extract concessions from the West -- appeasement, if you will.

Soon, Iran will have possession of nuclear weapons. Imagine they threaten to nuke American cities. Will we back down? Or will we fight?

If World War II taught us anything, it's that evil means business and there is no possibility of appeasing genocidal maniacs bent on world domination.

For let the irony not go unnoticed: The hydrogen cyanide that the subway terrorists planned to use, is the same formula for Zyklon B that the Nazis used in the gas chambers.

The first step in stopping the terror is to wake up to the reality: World War III has begun. They're determinedly planning the final conflagration. And they're coming to kill us.

What Happened When I Took a Cell Phone Break for 730 Days
Don’t Believe in Other Gods Versus God is One
Seeing Without Eyes
Why Shouldn’t We Eat Whatever We Want?
Comments
MOST POPULAR IN Current Issues
Our privacy policy
Aish.com Is Looking for Great Writers