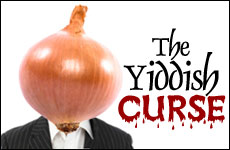 Curses may be against our ethical makeup. But euphemisms are another story.

Whenever I heard this phrase as a youngster, the adults around me plotzed. The victim would turn borscht red, sputter, jerk, then threaten to pass out. At the first sight of spittle, Tante Leah would holler, "Mount Sinai!" (The hospital, not the mountain.)

What sort of potent "Jew-doo" was this, I wondered. No one would translate until I was 21. My father solemnly whispered, "It means ... ‘He should grow like an onion with his head in the ground,'" as my mother poo poo-ed and spit-spitted, creating a small (but very demon-safe) pond in the living room.

"That's it?" was my first thought. "What did an onion do to star in such a curse?" was my second.

"What did an onion do to star in such a curse?"

Just as Catholic countries use blasphemy, and Eastern cultures k'nock your ancestors, shtetl-honed, Yiddish curses have a verbal magnificence. As cursing is a violation of Jewish ethics, Eastern European Jews, in desperate need of catharses in a hostile world, found a loophole. Euphemism. What most Jews may lack in fists, we make up for in pisks. These euphemistic sentences (or entire paragraphs) are juicy, creative maledictions that no simple "Drop Dead!" or obscene word could possibly convey. In fact, the whole point of the Yiddish curse is not to swear, but to . . . prophesize. Oh, and have fun.

For example: How do you get around saying, drop dead?"
Simple: "May you have ritual-purification water (that is, for a corpse) poured over you." Klop!

See? You're not "cursing," but oy vey! A blessing this isn't. Many of these maledictions employ what I call the "shmooze 'n klop." This involves lulling your victim into a false sense of your good wishes. Then, when he's kvelling, you yank it away -- like magician snatches a tablecloth from under your best china – and turn it to tsouris. And what could be worse for a Jew than good fortune (health, wealth, nakhes) suddenly becoming a kappore (catastrophe)?
Listen ....

Now, mostly a lost art, creative Yiddish curses were also shtetl recreation – exercises in "tit for tat" and one upsmanship. It was a form of reciprocal "besting." The more sarcastic, nasty, and witty, the better.

Shlomo:   A shaynem dank dir im pupik!   (Many thanks in your belly button!)

Chaim:   A meshugenem zol men oysshraybn un dikh araynshraybn !!!!   (A maniac should be crossed off the register of madmen and you should be inscribed in his place!!!!)

Delicious, nu? The competitive Yiddish curse required not only verbal talent, but listening. So it occurred to me, what would happen if, in this harsh world of backbiting, bullying, and brutality, we restored this lost art to its former glory to settle our scores.

First, for the yentas and bulvans in our lives, a good "May your navel turn dizzy!" beats chewing our stomach linings. The therapeutic benefits alone of "Biling and Smiling," could save a fortune on Mylanta.

Next, I propose a new reality show: "KLOLE" (A Curse). Forget eating worms, confessing your husband's a schnook, "Trumping," Jerry the Springer, or "No dealing" with a guarantee of 100K – when you've been living on kishke. This my friends, is the real stuff, the ganza, the emmes!

Just imagine politicians and talking heads jockeying for position with true wit instead of "war."

BUSH:    "May you fall into the outhouse just as a regiment of Ukrainians is finishing a prune stew and twelve barrels of beer."

CLINTON:    "May the lice in your shirt marry the bedbugs in your mattress and may their offspring set up residence in your underwear."

ANNE COULTER:    "May your blood turn to whiskey, so that 100 bedbugs get drunk on it and dance the mazurka in your belly button."

As the proverb goes: "A curse is not a telegram: it doesn't arrive so fast." Like caviar, it must be savored. Our VIPs could release their hatred, collapse in hysteria – and be forced to listen.

And wouldn't that be a leben ahf unser kop! (A blessing on our head!)

The Shtetl Olympics
Why Are The Prayers Of Yom Kipur So Repetetive?
Ha'azinu 5783: A Time for Unity!
Twisted Thinking
Comments