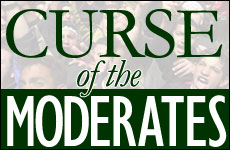 The mob has turned this into a test case for freedom of speech in the West.

As much of the Islamic world erupts in a studied frenzy over the Danish Muhammad cartoons, there are voices of reason being heard on both sides. Some Islamic leaders and organizations, while endorsing the demonstrators' sense of grievance and sharing their outrage, speak out against using violence as a vehicle of expression. Their Western counterparts -- intellectuals, including most of the major newspapers in the United States -- are similarly balanced: While, of course, endorsing the principle of free expression, they criticize the Danish newspaper for abusing that right by publishing offensive cartoons, and they declare themselves opposed, in the name of religious sensitivity, to doing the same.

God save us from the voices of reason.

What passes for moderation in the Islamic community -- "I share your rage but don't torch that embassy" -- is nothing of the sort. It is simply a cynical way to endorse the goals of the mob without endorsing its means. It is fraudulent because, while pretending to uphold the principle of religious sensitivity, it is interested only in this instance of religious insensitivity.

Have any of these "moderates" ever protested the grotesque caricatures of Christians and, most especially, Jews that are broadcast throughout the Middle East on a daily basis? The sermons on Palestinian TV that refer to Jews as the sons of pigs and monkeys? The Syrian prime-time TV series that shows rabbis slaughtering a gentile boy to ritually consume his blood? The 41-part (!) series on Egyptian TV based on that anti-Semitic czarist forgery (and inspiration of the Nazis), "The Protocols of the Elders of Zion," showing the Jews to be engaged in a century-old conspiracy to control the world?

A true Muslim moderate is one who protests desecrations of all faiths. Those who don't are not moderates but hypocrites, opportunists and agents for the rioters, merely using different means to advance the same goal: to impose upon the West, with its traditions of freedom of speech, a set of taboos that is exclusive to the Islamic faith. These are not defenders of religion but Muslim supremacists trying to force their dictates upon the liberal West.

And these "moderates" are aided and abetted by Western "moderates" who publish pictures of the Virgin Mary covered with elephant dung and celebrate a crucifix sitting in a jar of urine as art deserving public subsidy, but who are seized with a sudden religious sensitivity when the subject is Muhammad.

Had they not been so hypocritical, one might defend their refusal to republish these cartoons on the grounds that news value can sometimes be trumped by good taste and sensitivity. After all, on grounds of basic decency, American newspapers generally -- and correctly -- do not publish pictures of dead bodies, whatever their news value.

The worldwide riots and burnings are instruments of intimidation, reminders of van Gogh's fate.

There is a "sensitivity" argument for not having published the cartoons in the first place, back in September when they first appeared in that Danish newspaper. But it is not September. It is February. The cartoons have been published, and the newspaper, the publishers and Denmark itself have come under savage attack. After multiple arsons, devastating boycotts, and threats to cut off hands and heads, the issue is no longer news value, i.e., whether a newspaper needs to publish them to inform the audience about what is going on. The issue now is solidarity.

The mob is trying to dictate to Western newspapers, indeed Western governments, what is a legitimate subject for discussion and caricature. The cartoons do not begin to approach the artistic level of Salman Rushdie's prose, but that's not the point. The point is who decides what can be said and what can be drawn within the precincts of what we quaintly think of as the free world.

The mob has turned this into a test case for freedom of speech in the West. The German, French and Italian newspapers that republished these cartoons did so not to inform but to defy -- to declare that they will not be intimidated by the mob.

What is at issue is fear. The unspoken reason many newspapers do not want to republish is not sensitivity but simple fear. They know what happened to Theo van Gogh, who made a film about the Islamic treatment of women and got a knife through the chest with an Islamist manifesto attached.

The worldwide riots and burnings are instruments of intimidation, reminders of van Gogh's fate. The Islamic "moderates" are the mob's agents and interpreters, warning us not to do this again. And the Western "moderates" are their terrified collaborators who say: Don't worry, we won't. It's those Danes. We're clean. Spare us. Please.

The Electronic Chuppah
Blessing on Chewing Gum
Was Rahab a Prostitute?
Extras In Our Own Epic
Comments
MOST POPULAR IN Current Issues
Our privacy policy