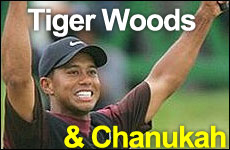 Is a beautiful golf swing enough to make you a hero?

According to many sportswriters, he is the most gifted and greatest athlete in the world today.

Last year he was the highest-paid professional in any sport, earning an estimated $110 million from winnings and endorsements.

To watch him play the game of golf is to be thrilled by the skill of a master who comes as close to perfection as humanly possible. Tiger Woods has won 14 professional major golf championships, 71 PGA tour events, and held the number one position in world rankings for the most consecutive weeks and for the greatest total number of weeks. Perhaps nothing indicates his dominance of the sporting world more clearly than the fact that he is the only person ever to be named Sports Illustrated's Sportsman of the Year more than once.

No surprise then that Tiger has become an international idol to hundreds of millions of fans. No surprise too that the sports conglomerate Nike realized years ago that Tiger is a living legend who can sell their product better than anyone else because he's a hero who young and old want to emulate. And Tiger never disappointed his major sponsor.

That is up until now -- when Tiger Woods fell off his vaunted pedestal of perfection.

The man we universally admired on the golf course stunned his legions of fans, in the aftermath of a bizarre automobile accident, by admitting to indiscretions and character flaws that demonstrated he was far from perfect in other areas of his life. The powerful headline in the New York Post said it all: “Tiger Woods is a Cheetah.”

Should morality play a role in judging expertise on the playing field?

Let’s resist tasting the waters of schadenfreude, taking pleasure in the downfall of others. That’s not my intention here. The Tiger Woods episode presents a fascinating question that is connected to the heart of Chanukah: Does personal dereliction of character in any way diminish Tiger Wood’s standing as a sports hero? Should morality play any role in the way in which we judge people whose claim to fame is based on their expertise on the playing field? Is marital infidelity a sin serious enough to warrant Nike canceling his endorsement contract because Tiger no longer deserves the status of a hero -- a man worthy of being looked up to as a role model?

The debate has passionate spokesmen on both sides of the issue. But for Jews sensitive to the spiritual messages of the holidays we should certainly include in our deliberations a truth central to the holiday of Chanukah that will shortly be with us.

What are we really celebrating in the victory of the Maccabees? What was at stake was far from a military battle. The Syrian Greeks of the time presented a challenge to the spiritual message of Judaism. Hellenism worshiped hedonism. It promulgated a culture that stressed the gymnasium over the house of study. Its sanctuary was not a place in which people came together to worship God. Instead it was the amphitheater, the arena where (naked) competitors came to vie for medals in sporting competitions that tested physical skills. Hellenism gave birth to the Olympics whose definition of greatness was measured by athletic prowess.

In Jewish history, the Chanukah story represented the first time Judaism was threatened not so much by a military power that sought its physical destruction, but rather by an ideology and a culture that through assimilation endangered its spiritual identity.

How appropriate that the symbol of Chanukah, celebrating the victory of the Maccabees, is oil. Oil has a unique characteristic. While all other liquids readily mix and “assimilate,” oil maintains its unique identity, refusing to combine with others but instead retaining its distinctiveness and rising to the top. For that very reason, the oil of the menorah stands as a symbol of the Jewish people -- a people who have remained faithful to their very special mission of serving as “a light unto the nations.”

Beauty alone is not truth.

Historians have put it well in capturing the essence of the philosophic battle between Judaism and Hellenism. Hellenism preached the holiness of beauty. It is what Keats would immortalize in his famous line in his Ode on a Grecian Urn: “For beauty is truth and truth is beauty; that is all ye know and all ye need to know.” Judaism disagrees. Instead of the holiness of beauty, Judaism emphasizes the beauty of holiness. It is not beauty alone that is truth; the beautiful with moral imperfection is tainted so that it is both no longer true nor truly beautiful. It is only the holy that deserves to be admired and revered. The holy is more than beautiful -- it lights the path to our personal perfection.

People can make mistakes and of course still be entitled to our compassion. Tiger is only human and we all need to recognize that. But that isn't the issue. We placed him in the pantheon of people who we can point to and tell our children, “This is the kind of person who deserves our respect and this is the kind of person you should try to grow up to be like.” Should we still view him as a hero?

To gain entry into the club known as “Heroes,” being beautiful or having a beautiful golf swing just isn't enough. For centuries we've been celebrating Chanukah just to make this point: the miracle of the Maccabees was the victory of holiness over Hellenism.

Do I still want to watch Tiger Woods play golf? Of course. As a golfer he can still be ranked number one as long as he continues to play his incredible game.

But as a man worthy of admiration as a hero?

I agree with Benjamin Disraeli: “The legacy of heroes is the memory of a great name and the inheritance of a great example.” And I can't help but strongly feel that Tiger lost his claim to that legacy.

Zeus and Greek Gods
The 21st President of the United States: Failure or Inspiration?
Hiding Their Jewishness
The Jewish Pope: Following the Questions Home
Comments