The Curse of Plenty 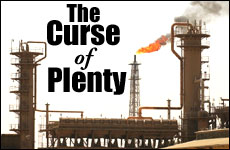 Why Israel wasn't blessed with an abundance of oil.

Jews used to joke in a semi-serious sigh, if only Moses would've had a better sense of direction and turned right instead of left, we could have been heirs to all those precious oilfields in the Middle East. Instead we got Israel, and the most even God could say about it is that it's a land flowing with milk and honey.

If we are really God's chosen people, why did He allot the most valuable natural resources to our neighbors? Why did the Arabs get the oil while we got stuck with so much sand and desert?

It's a puzzle that has perplexed us for years. But thanks to some remarkable findings by economists and social scientists, we've discovered an answer: it was divine providence that protected us from what Richard Auty labels “the curse of natural resources.”

There is a link between abundance of natural resources and poor economic development.

It seems, as a great deal of research now proves, countries rich in natural resources bear a burden that ends up stifling real growth and prosperity for its people. As counter intuitive as it may seem, there is a link between abundance of natural resources and poor economic development. Petroleum producing countries are an excellent example. From 1965 to 1998 gross national product per capita in OPEC countries decreased on average by 1.3% while in the rest of the developing world per capita growth was on average 2.2%.

It is precisely in the countries that are beneficiaries of the largest resources that poverty and misery reign as war and violence run rampant. Oxford professor and World Bank economist Paul Collier has calculated the probability of civil war in such countries. His conclusion is that in a country that doesn't dispose of substantial natural resources, the risk is only as high as a half-percent. In countries that depend mainly on natural resources, on the other hand, the probability rises to 23 percent. Raw materials are "the most significant risk factor" for a community, according to Collier -- more important than historical, geographic or ethnic factors.

Terry Lynn Karl, a political science professor at Stanford University and the author of The Paradox of Plenty shows how the populations of poor countries like Nigeria often get poorer after oil is discovered and a tiny elite benefits. “Countries with a history of conflict,” he writes, “have perverse effects from mineral wealth -- more war, more corruption, less democracy and more inequality.”

In the past few weeks commentators have discussed the effects of this “curse of plenty” as it looms in the future for Afghanistan. Taking everyone by surprise it's just been discovered that there is approximately a $1 trillion worth of minerals beneath this seeming wasteland. So what does this mean for the country and its inhabitants? Many experts in third world resource politics argue that almost certainly it portends only bad things to come. Warlords and tribal chieftains will almost surely now have reason to fight for many decades to come because the treasures of victory are so enticing. A land flowing with titanium is not destined for tranquility.

A land flowing with titanium is not destined for tranquility.

And it isn't only conflict over newfound wealth that explains why a surfeit of natural resources so often ends up being a curse instead of a blessing. When countries have riches readily available just for the taking under their feet they are not really motivated to make maximum use of their brains. Ingenuity is the product of need; resourcefulness, initiative and inventiveness are the ways people who have to struggle for prosperity grow to greatness.

Countries are a lot like people. Children born into extreme wealth, never having had to exert themselves to be surrounded by luxury, all too often end up as nonproductive playboys who contribute nothing to the world round about them. They live life as parasites, reaping the benefits of unearned riches without feeling the need to make any personal payments or contributions in return. Small wonder that two of the richest men in the world, Warren Buffett and Bill Gates, have made clear they want to give away most of their fortunes during their lifetime so that they do not burden their children with what they've called “the curse of having too much.”

So too, countries whose gifts of natural resources are so plentiful that not much is expected of its inhabitants don't encourage their people to develop as productive human beings. Their wealth dooms them to human stagnation. Easy money creates lazy people. Affluence without effort is a surefire recipe for the decline of a people, a culture and a civilization.

Just imagine if in 1948 Jews would have come to a land welcoming them with the oil reserves of their neighboring Saudi Arabia. We would never have seen the creation of the country that is a world leader in so many areas of scientific achievement, of medical breakthroughs, of pioneering accomplishments that are nothing short of miraculous. Without oil, Israelis realized that they had to earn their bread by the sweat of their brows -- and their brows of course were the place they kept their brains.

That's why, in retrospect, the greatest blessing of Israel is that it wasn't cursed with an overabundance of resources that would make intelligence and brainpower unnecessary. All God chose to give us were milk and honey. Not because these are the two most valuable items in the world but because they are the metaphors for the true blessings of life.

Milk is the first food we imbibed from our mothers. It came as an expression of the greatest love possible, a gift of self. And what it gave us that made it so precious was that it fulfilled our most basic wants. As a child every one of us was content with milk. Only as we grew older did we confuse greed with need. God gave us a land “flowing with milk” to remind us that out of his great love He made sure we wouldn't ever be deprived of what is really essential for our well-being.

And then God made the Promised Land grant his people the gift of abundant honey -- the symbol of sweetness that makes life worth living. Material blessings don't necessarily bring joy. Millions of dollars don't automatically assure blissful lives. The land of Israel however was granted the divine ability to make its inhabitants happy.

Human beings need lives of meaning. Sweet lives are the result of spiritual fulfillment. So God promises us that he will nurse us with the milk of his mother love and sustain us with the honeyed sweetness of his constant care and concern.

And who wouldn't trade that for all the oil in the world?

The Electronic Chuppah
Evolution 2.0: The Coming Darwinian Revolution
Chukat 5782: Let’s Play the Blame Game!
The Sin of Moses: The Two Ways to Communicate
Comments
MOST POPULAR IN Current Issues
Our privacy policy