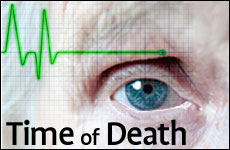 You never know when could be the last time.

Mrs. B had been my patient for 10 days. She had come to the hospital because of difficulty breathing, complicated by a history of chronic pulmonary disease, lung cancer, breast cancer, and other things. She was 75. I liked her immediately, she was intelligent and funny. Seeing her was my favorite part of the day. We connected from the beginning.

She had a daughter whom she did not want to burden, a brother, and grandchildren. Her granddaughter’s name was Amy; she had recently gotten married. During all the time we spent together, I never saw anyone visit her. I felt she was somewhat lonely, but I was humbled by her positive spirits and strong will.

Yesterday things were looking better. Her numbers were up, her wheezing was gone. We were planning to discharge her to a rehab center where she would complete her recovery and soon after go home. She wanted to go because there were “bills to pay” and she missed her neighbors.

“Are you okay?” I asked. “I feel like dancing,” she replied.

We stopped by her room for one last checkup and she looked ready to take off. A few minutes into our visit, another patient’s heart stopped. Doctors were called to help and I ran to assist. When I came back to Mrs. B, her room was full of doctors and nurses; she was breathing very heavily and her heart was racing, so the staff was trying to control her pulse. I saw she was scared. I held her hand and asked her about her plans after discharge. I asked her about her daughter and grandkids. She could barely breathe but was eager to tell me. After a half hour, her heart went back to normal and things seemed under control.

Before going home last night, I went to check on Mrs. B. one last time. She was doing well. She had heard she was going to be transferred to the cardiac unit so we could watch out for more arrhythmias like the ones she had experienced earlier in the day.

“Why do you want me to sleep here?” I asked.

“Because I trust you.”

“And you don’t trust anyone else?” I asked, laughing.

We laughed again. I told her I’d see her first thing in the morning. As I was walking out the door she said to me, smiling, “Bright and early tomorrow, Doc. I’ll be here.” I smiled back at her and went home.

This morning I came to the hospital to find out that she was intubated. She had gone into respiratory failure and had to be transferred to the critical care unit. I went to see her immediately. She was heavily sedated, intubated, and wearing cushioned gloves to prevent her from hurting herself or anyone else. The nurse told me she had been combative.

The woman laying in the bed looked nothing like Mrs. B; she didn’t even look like a person. The monitors were beeping and flashing, doctors and nurses were coming in and out of her room, pushing me away. I told the doctor in charge I wanted to wake her and say good morning to her, I wanted her to see a familiar face, she must had been so scared! He asked me not to wake her since she had been very combative. So I didn’t.

A few hours later, I was walking to the cafeteria when I got a text from a classmate – Mrs. B’s heart had stopped and she was dying. I ran to the critical care unit to find a sea of white coats and blue scrubs coming in and out of the unit. There was almost no space to move. I pushed my way through the crowd and into the room. The doctor in charge asked, “Would she want CPR or for us to let her go?”

The staff was frantically calling her family, but they were not getting through. I kept on thinking how they’d feel to find out later they had missed this call, a last call. Everyone was at a loss. From the back of the room I said, “From what I knew about Mrs. B, I think she’d like us to try it all, until the end.” I suddenly understood she was dying and I was the closest person to her who could be reached at this moment.

“Start CPR!” said the physician in charge. They all rushed to their positions and began CPR.

"We need more people to help," the nurse said. "Would anyone want to help?” I jumped to put on some gloves and rushed to her side.

She was dying. I prayed for her as I performed CPR.

The doctor looked at me and said, “It's your turn, give it your best.” I pressed on her chest until I thought I’d pass out from heat. Someone else took over, and we alternated every two minutes, for many long minutes. She was bleeding through her neck and unresponsive. She was dying. I prayed for her as I performed CPR.

With no response there was nothing left for us to do. “Anyone else has any ideas?” the doctor asked. Silence filled the crowd. No ideas. He asked us to let go. “1:06 is the time of death,” he said. Suddenly the coats and scrubs were marching out of the room, the equipment was turned off, the tension was over.

I walked out into the waiting room and grabbed a chair. My classmates where waiting for me, speechless. I started crying and a few nurses came to console me. “You did good… you did your best…” All I could think about was how sadly she died, surrounded by strangers. I wondered if she knew I came to visit her this morning, and compressed her chest until she was gone.

I know I did my best. I don’t regret one antibiotic I suggested for her, or one x-ray. But I’ll always regret not having told her last night how much I enjoyed getting to know her and how honored I felt that she trusted me so much.

Oblivious to the Music
The 21st President of the United States: Failure or Inspiration?
Hiding Their Jewishness
The Jewish Pope: Following the Questions Home
Comments