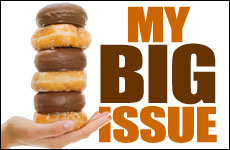 When food took over my life, I eventually weighed up to the matter.

I had always been naturally petite. Never needed to count calories, weigh myself on the bathroom scales or abstain from fatty foods. That's just the way my body was and, I thought naively, would always be.

When I was 18 I went away for my gap year and everything changed.

I missed my family and the comforts of home. Loneliness gnawed at my insides. Subconsciously I turned to food.

A colossal bowl of breakfast cereal followed by four rounds of chocolate milk. Double portions for lunch where the food on my plate was swimming in pools of oil. In between meals I would sit with my roommates and blissfully binge on chocolate bars and cream-filled cookies.

I ate through that entire year, thinking nothing about the gigantic quantities I was consuming. I’d never had to think about eating healthily before and it never once crossed my mind to consider doing that now.

Eventually the year drew to a close. I returned home, eager to see my family, and completely oblivious to not only my new fixation with food but the drastic change in my appearance.

I was instantaneously hit by the horror on their faces.

My family was shocked when they saw me and I was instantaneously hit by the look of horror on their faces. Apparently one cannot eat and eat and eat without putting on a little (or in my case, a lot of) weight.

Me! The skinny girl who had never had to worry about weight in her whole life, was now a big, fat blob.

I couldn't even look in the mirror without feeling repulsed. Two hideous chins glared back at me. Sad eyes stared out from chubby cheeks, and ugly flesh wobbled in places where they were most definitely supposed to remain motionless.

And yet, as much as I hated the new, fat me, I couldn't seem to do anything about it. I was bored and lonely and used food to fill the void. Food was my constant companion and overeating had become so entrenched in my habits that I could not control myself – no matter how much I tried.

During the day, my hand was constantly in and out of my mouth. I couldn’t stop eating. Peanuts, raisons, apples, anything – as long as I was eating something… all day long.

It wasn't that I was hungry. In fact, I was often so full at the end of a meal that I actually thought I might burst open. But even though my head begged me: Stop eating! and my heart cried: Please don't do this to yourself! and my stomach screamed I'm in pain – don't put another morsel into your mouth! I still could not stop.

My mother was desperate, but all her overt attempts to get me to lose weight only encouraged me to hide my secret scoffing. She took me to a beauty therapist who promised to trim off all of my unwanted weight in a matter of weeks. It didn't work. My mother took me to doctors, convinced that I must have some sort of thyroid problem. I didn't.

I was too ashamed to tell anyone about my problem.

My mother never considered getting me professional counseling for my overeating. She saw that I was overeating, but was totally unaware of how much I was really eating when her back was turned and no one was looking. I didn't think about reaching out for help. I was too ashamed to tell anyone about my problem, and besides, I didn't even know if help existed for someone like me.

And so I continued along on this downward spiral. I thought about food all day long. I'd wake up in the morning and race downstairs, absolutely desperate to consume my morning breakfast. When there was literally no space left to put any more food, I'd be so upset. I would now have to wait several hours until lunch. How could I possibly wait that long?! Lunch would come and go, and the long hours until dinner would stretch out like a never-ending black hole which I would snack and munch and chew my way through.

Every day I would flick through page after page of glossy magazines and stare for hours at what I thought were the beautiful stick figures of celebrities. They were so perfectly thin! I craved to look like them, but simply could not resist the all-encompassing urge to eat.

My obsession with food grew along with my expanding waistline. Unlike most people, I never actually weighed myself. Maybe it’s because the scales in our home were broken, maybe it’s because I hate numbers, or maybe it was simply because I didn’t care what the numbers on that dial told me – I only cared about how I looked. What difference did it make if I lost a pound or two? I wanted to be thin! Not “fat minus a few pounds”!

When I wasn't eating I was planning my next meal. When night would come I would lie in bed, exhausted and ready to fall asleep, but knowing it would be impossible until I ate just one more bowl of cereal. And so I would sneak downstairs and guiltily fill my bowl.

I'd return to my bed heavy and bloated. Unable to dispel the incessant images of food floating inside my head, luring me to devour them, I would finally succumb to slumber, desperate for a new day to come so that I could eat again.

It took a long time to break my vicious cycle. Only after seeing myself in pictures was I able to summon the strength to change. I stared at those pictures in mortification. Was that girl really me? I could barely make out the contours of my own face. It looked like I'd eaten myself!

The decision was instant. There would be only one bowl of cereal per day. Salad for lunch. No more constant snacking. I would lose weight no matter what.

I was totally preoccupied with dieting. I went to the gym most days and the pounds slipped right off. The compliments came pouring in and I reveled in them.

Some months later, after steadily eating the barest minimum to function, one of my friends made a sarcastic comment that I was anorexic. I was so angry – how dare she call me that! She was obviously jealous because she didn't have a figure like mine!

Yet her words hit the mark, and deep down I knew that as painful as her comment was, that's where I was headed if I continued along my skinny path.

I had desperately wanted to look like those emaciated models in the magazines; the ones that I had idolized for so long. But it came at a high price. I was constantly thinking about my body and my weight. Constantly thinking about food and calories. And constantly hungry, shaky and irritable. If that's what it took to look like them, then I was out of the running. I knew I could not go on like this anymore.

Of course, it was important to look good and feel good about myself. But it could not be at the expense of my health. My entire self-esteem could not rest on my slender hips. I was more than just a body, and if I truly believed that, I had to put an end to my body obsession.

I couldn't remember what it felt like to eat normally.

It had been so long since I'd had a healthy relationship with food that I couldn't even remember what it felt like to eat normally, without guilt or fear. But I knew that I had to start eating properly in order to be a healthy, functioning teenage girl again.

Due to my private nature I did not consider sharing my struggle with anyone; though looking back I realize that had I done so, things would have been much easier for me. Instead I searched the Internet for help and advice, and from there found solutions and devised a plan of action.

The first thing I forced myself to do was to listen to my body and tune into the hunger cues my stomach was sending. I re-learned how to eat when I was hungry, and to stop when I was full. Before a snack I would ask myself if I was truly hungry, and after a meal I would ask myself if this stick of celery and can of Diet Coke would really be enough to nourish me for the next four hours.

I actively pursued enjoyable outlets and hobbies and didn't allow myself to sit still with nothing to do. I made a rule that I would only think about food when it was time to eat, and I found that by religiously eating three balanced meals every day, I naturally thought less about food because I wasn't starving all the time.

It took time to start eating healthily again and to re-wire my brain into thinking healthy thoughts about food and weight. Of course, most people should seek help in order to get out of their addiction. Very few can do it themselves. Though I feared it would never be possible, I learned that with God's help anything is possible.

Now I can say with a full heart (not a full stomach) that I have succeeded. God gave us food not only to sustain us, but to enjoy. It is not our best friend and it is not our worst enemy. I take pleasure in food and eat just enough to give me the energy and nourishment that I need to live life to its fullest.

Danielle Rosen lives in Jerusalem with her husband and children, and is writing a book, Seeking Truth: The Diary of Danielle Rosen.