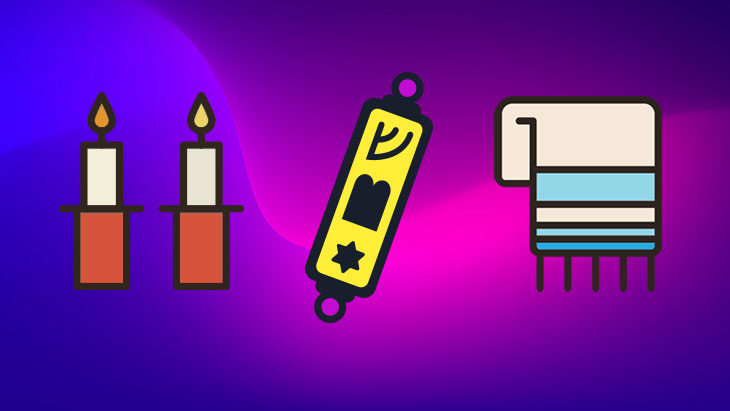 Here’s my list of Jewish emojis I submitted to the Unicode Consortium.

The other day, I was taking my morning walk and suddenly felt overcome by a tremendous feeling of gratitude. After all, I have a nice place to live in a wonderful part of town in a beautiful city. I enjoy good health, can pay my bills, afford good food, and have a beautiful family and people in my life who love me. And yet I had the nagging feeling that there was just one important thing missing, one thing vital to my very essence that would complete me. Maybe some of the more intelligent of you have already guessed it, but, at the risk of stating the obvious, I’ll just come right out and reveal what that one missing part of my life is: more Jewish emojis.

Before you minimize my desire, know this: I’m not alone in wanting more Jewish emojis. Oh, no. Far from it. In fact, would it surprise you to learn that an organization of European rabbis has made a formal request to the world body that regulates emojis to add images that represent Jews? Oh, yes. The Conference of European Rabbis actually sent a letter to the Unicode Consortium, which is known for selecting the emojis we use in our smartphones. How are these selected? It’s all based on submissions from individuals and organizations who present their case with evidence for why each one is essential. And you thought you had a lot of free time on your hands.

The letter pointed out that making more emojis that look like traditional Jews is a way to make the world more inclusive. Granted, there are already a few Jewish-themed emojis in use online and on various messaging platforms. These include a synagogue, two Stars of David, a Torah, and a bagel with a shmear of cream cheese. But out of the 2,800 currently approved emojis, very few are Jewish in nature. And we are all the poorer for that void.

Well, I for one can no longer just sit back and allow this Judaic vacuum to persist. Therefore, I’ve taken the liberty of creating the following proposed Jewish emojis. I only hope that the Unicode Consortium will consider them, do the right and fair thing, and adopt some or all of them into its listing of approved emojis. If that can happen, I will at long last feel that my life has been worthwhile and not some hollow Hebraic charade.

Why the need for a mezuza emoji? Are you kidding? You may as well ask, “Why should we put avocado in guacamole?” The mezuza is all about security. Just as it protects the household of the doorpost on which it is affixed, so its emoji counterpart will protect the person who inserts it into a document—as well as the person who receives said document. Many Jews who pass an actual mezuza, touch it as they do so, and then kiss their fingers. Jews can also do that to its emoji version, although the writer risks folks, who aren’t aware he’s kissing a mezuza emoji thinking he’s too in love with his words.

The Sabbath Meal emoji could very well hold the distinction of being the world’s busiest emoji. Just check out what this emoji might contain: two candles in a candelabra, a Sabbath dinner table, a Kiddush cup goblet of wine, two Sabbath challah loaves, a challah cover, a challah knife with an engraved handle, benchers for the grace after the meal, and don’t forget Bubbie’s apple crumble.No wonder on the seventh day God rested—He was exhausted from having created the Sabbath Meal!

The tallit is a prayer shawl with fringes attached to its corner, as ordered in Numbers 15:38-41: “Speak unto the children of Israel, and bid them that they make them fringes in the borders of their garments throughout their generations, and that they put upon the fringe of the borders a ribband of blue.” Hey, if it’s worthy of being in the Bible, the least they can do is okay it as an emoji. The tallit is allowed to rest on the shoulders or on the head in the manner of a cape. If the emoji features someone wearing it as a cape, perhaps he could be shown as a Jewish super hero – “Up in the sky – ‘It’s a blintz!’ ‘It’s a brisket!’ ‘It’s Talit Man!”

Whether you call it a synagogue, temple, or shul, it’s our Notre Dame Cathedral, our Baha’I Temple, our Sultanahmet Mosque, the main building where any given Jewish congregation worships and gathers for holidays, celebrations, and life events. So as to avoid Synagogue Envy, there could be a set of twelve different synagogue emojis circulating throughout the year, a month at a time. Just think of all the time saved and Carpal Tunnel Syndrome avoided when you can type “I’ll be in [SYNAGOGUE EMOJI]”, rather than having to type “synagogue” constantly. And there can also be marketing tie-ins. Think 3D renderings of the various synagogue emojis. Collect the complete set! And then sell them on Amazon!

An emoji for just one element of a Jewish holiday? Why not? We have emojis for candy canes, mangers, and reindeer for Christmas. Why not one for the temporary dwelling with a thatched roof used during the fall festival of Sukkot? And who’s to say it won’t inspire some city planner to create a sturdier version of a Sukkah to help alleviate the homeless crisis? After all, it was God who told Moses, in the Book of Leviticus, “"You shall live in booths seven days; all citizens in Israel shall live in booths, in order that future generations may know that I made the Israelite people live in booths when I brought them out of the land of Egypt". Of course, God said nothing about a Sukkah emoji, but you can read between the lines for that.

Did you know that each member of the band Kiss has his own emoji? Call me crazy, but if Gene Simmons and Ace Frehley can have their own emojis, shouldn’t the culturally respected klezmer band have its own as well? After all, this celebratory dance tune music has been around for centuries. I’ll go a step farther – let’s embed the emoji with a digital music chip so we can actually hear this wonderful music, too! And the image itself could show a typical band with bass or flute, violin, piano, accordion and trumpet. The ultimate “Klezmoji”, as it were!

The Immigrant
In the Shadow of David and Goliath
Where Do the Laws of Nature Come From?
Saadiah Gaon, Rashi and Maimonides: How Three Rabbis Revolutionized Judaism
Comments